Relocated to its current location behind the Person County Museum of History on Main Street in Roxboro, NC, the Van Hook Subscription School is believed to be the oldest school building that is still standing in North Carolina and is the oldest meeting house in Person County. The Van Hook Subscription School was originally located on Payne's Tavern Road in the Flat River area of Person County approximately four miles from its current location. It was built as a school for boys 209 years ago near Payne's Tavern by Kindle Van Hook, one of the original subscribers whose name is found in the agreement between the teacher William Whitefield and the parents of the students.

The Van Hook Subscription School at its current location behind the Person County Museum of History on the corner of Main Street and Morehead Street in Roxboro, NC. 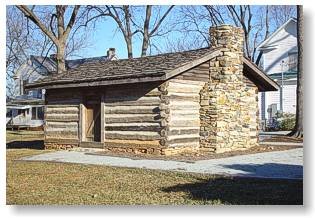 School Rules and Consequences from 1848. 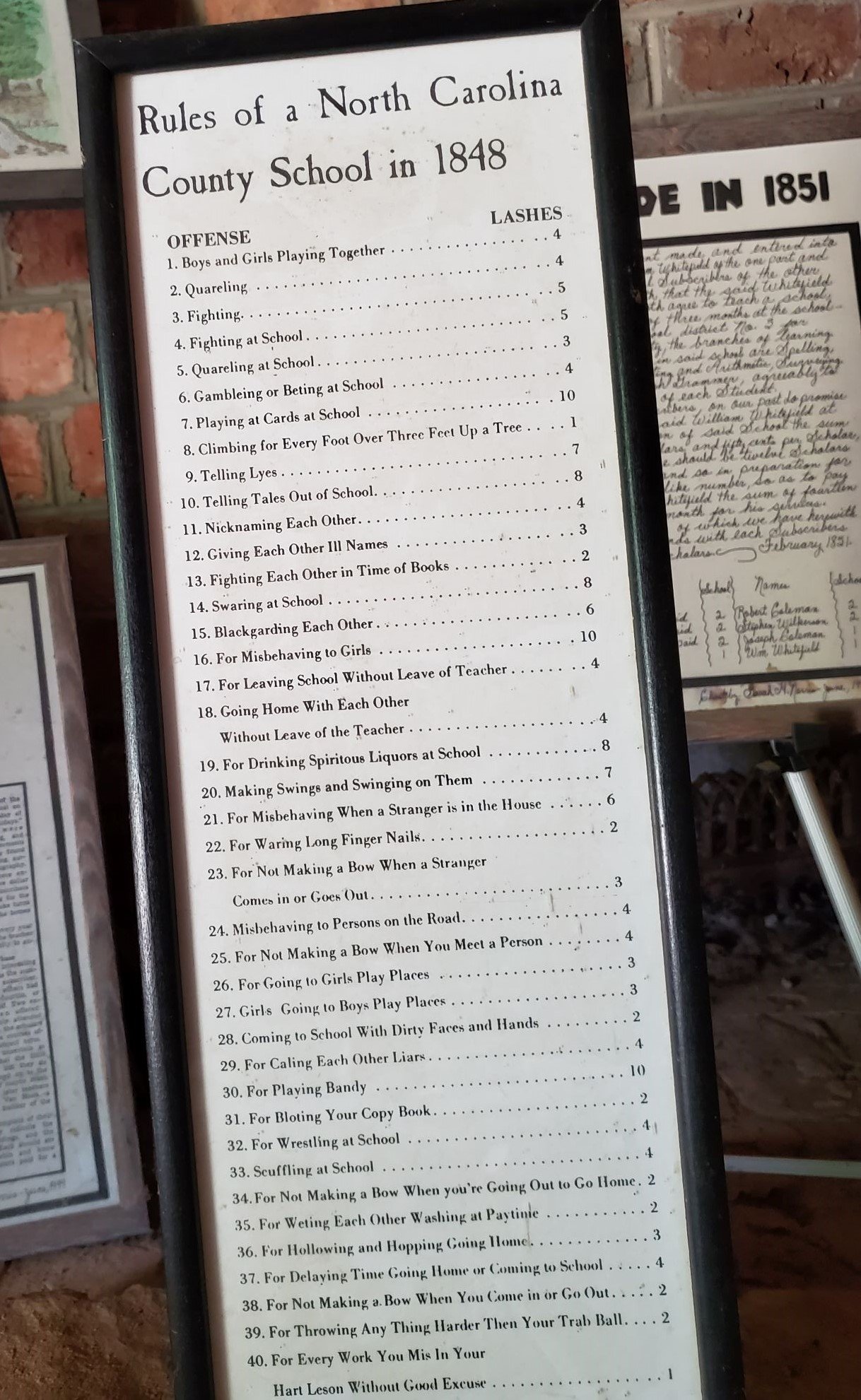 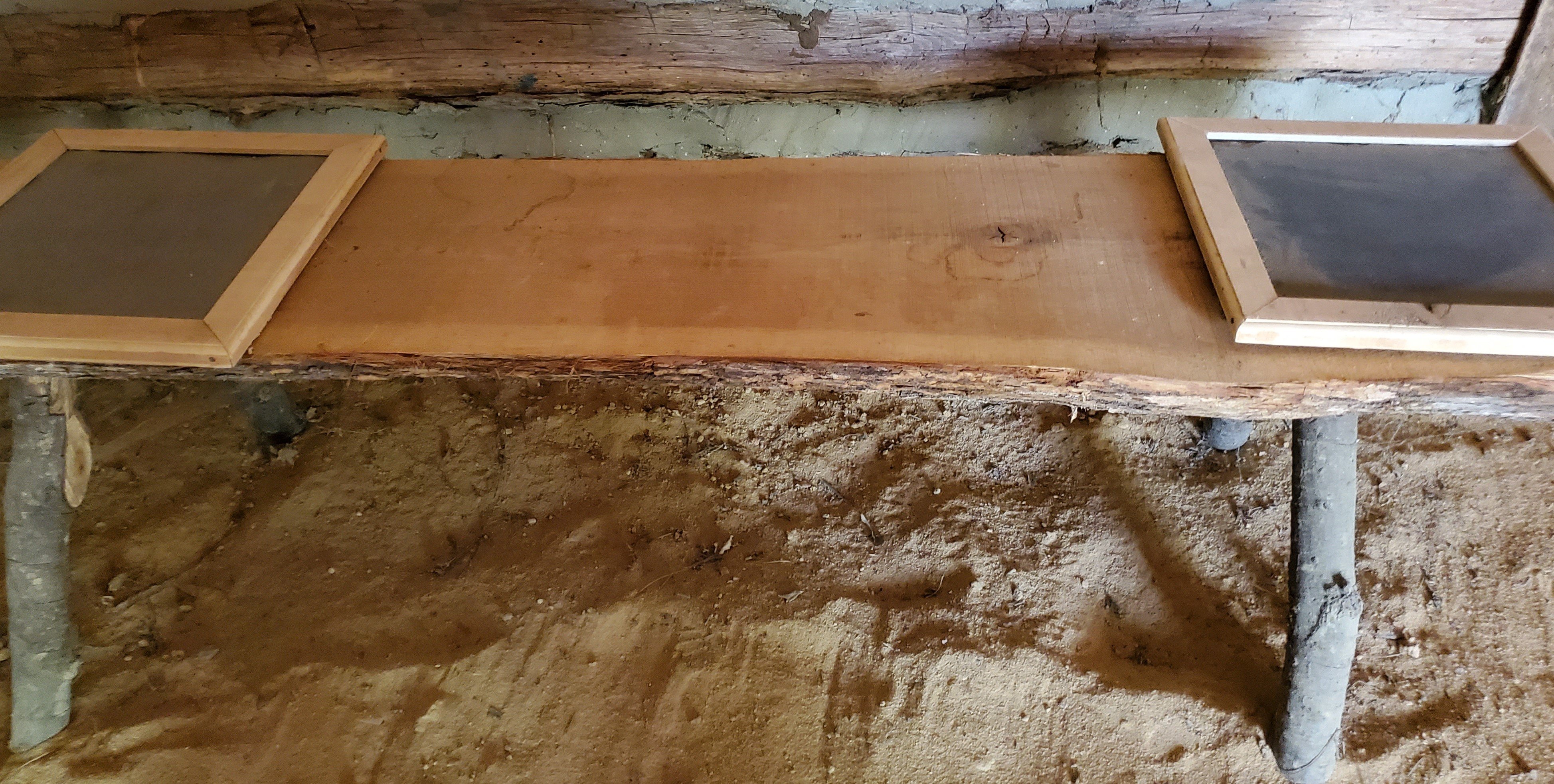 This was the desk of Schoolmaster William Whitefield who was the teacher at the Van Hook Subscription School from 1810-1857. 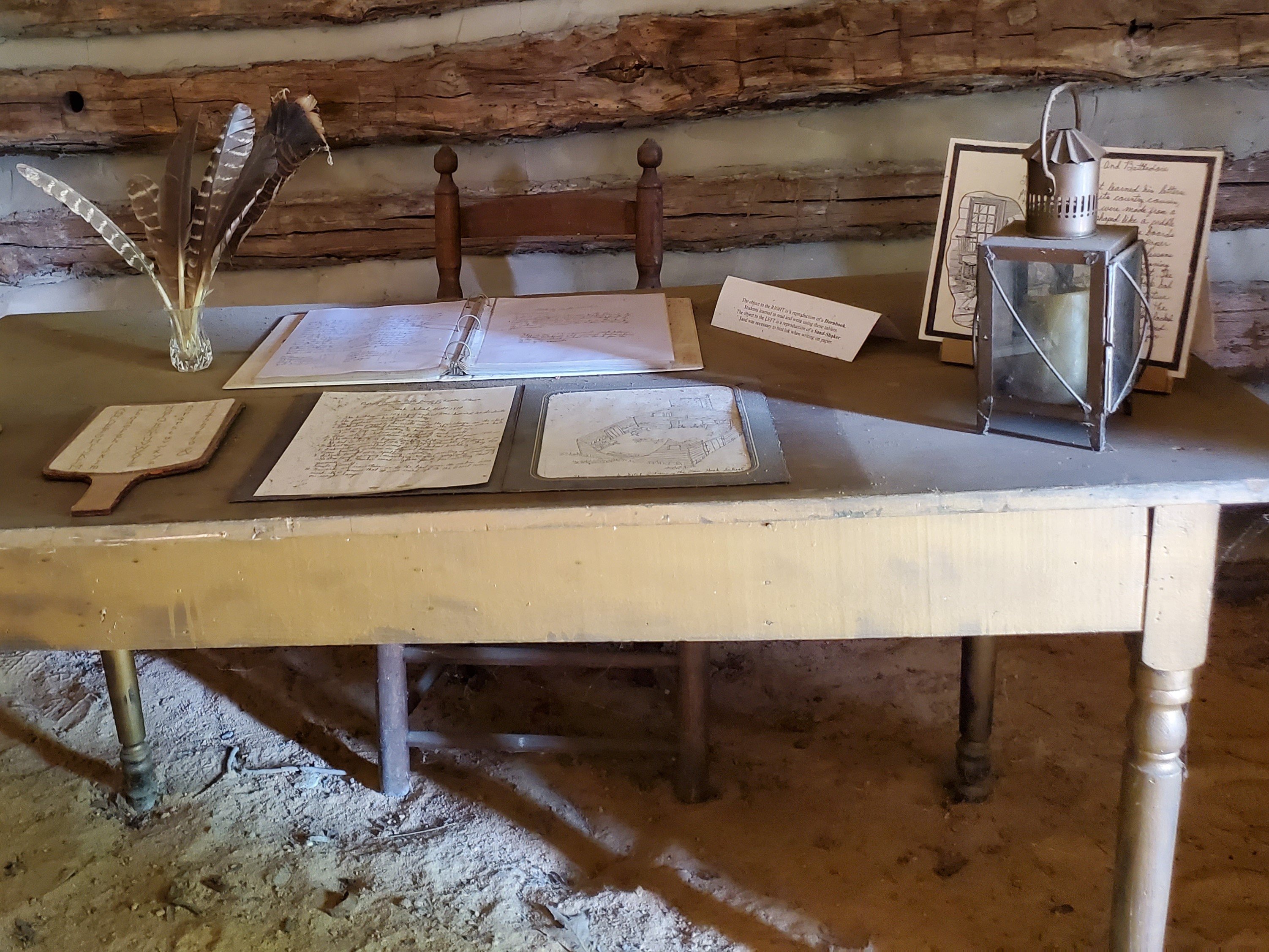 This is the inside corner of the school. The school was 10' x 15' and 7 feet tall, although it may have been a little taller originally but some logs directly on the ground have since rotted. 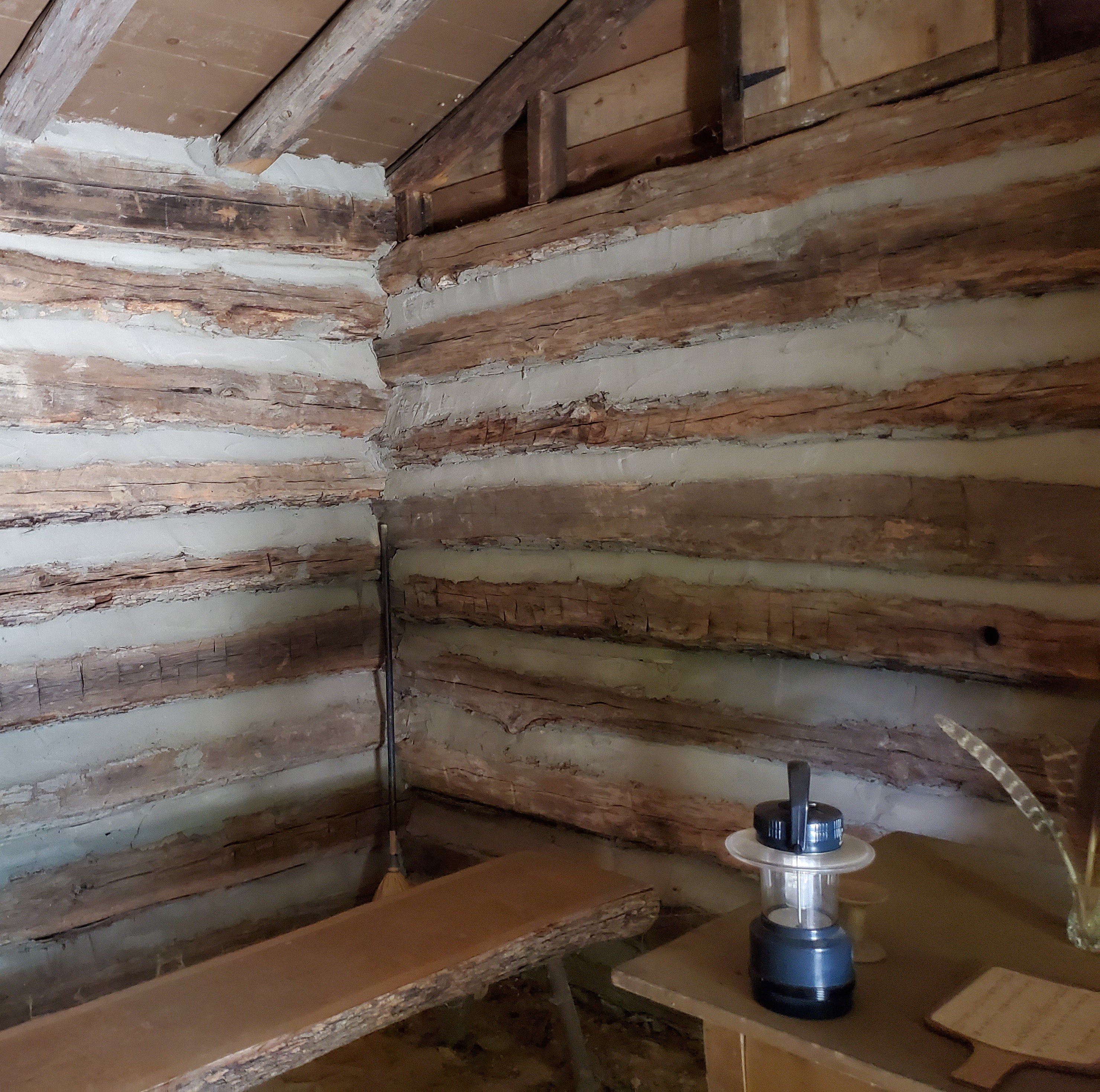 This is a drawing of what the Van Hook Subscription School may have looked like in the 1800s at its original location on Paynes Tavern Road in the Flat River area of Person County, North Carolina. 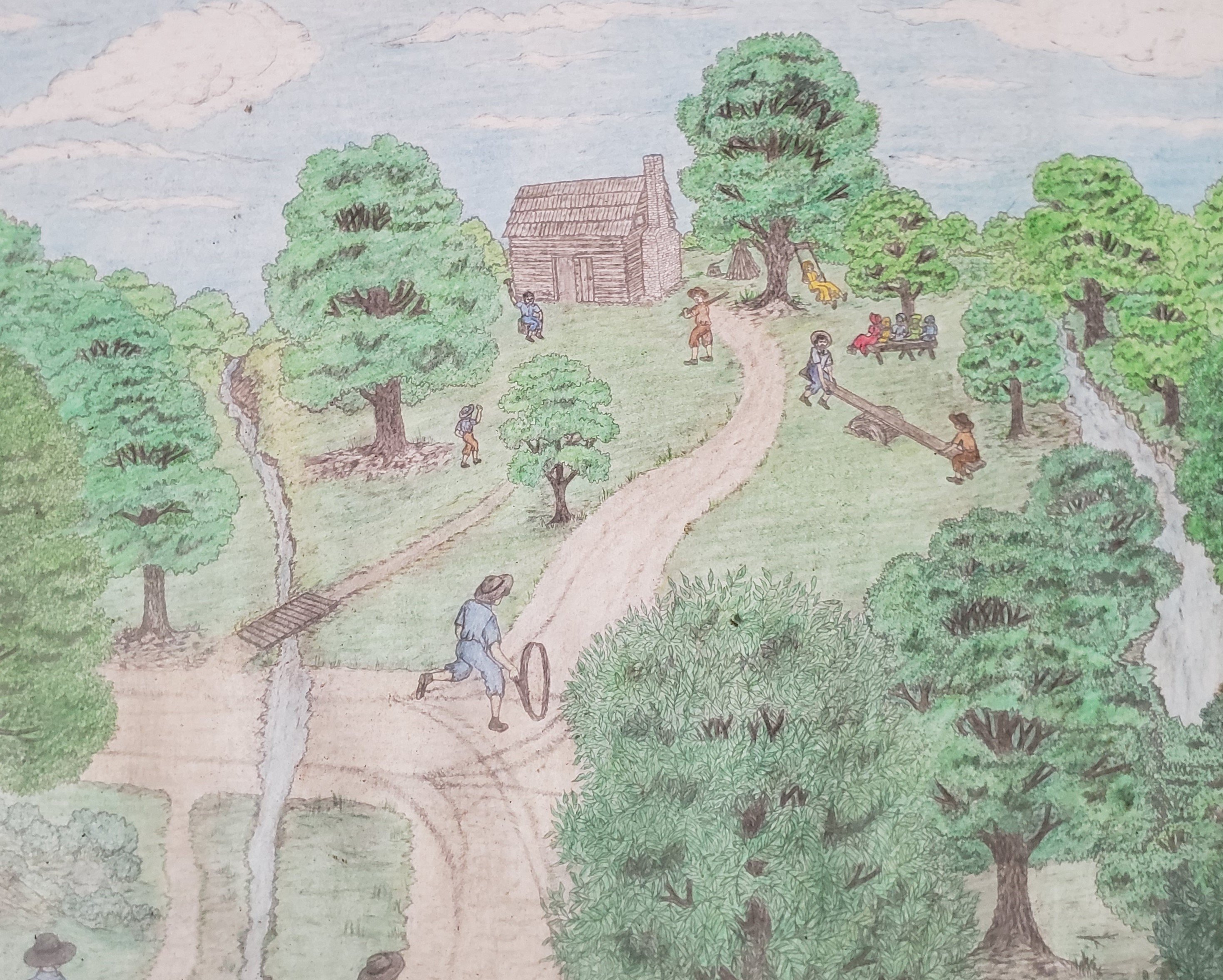 Hear is a frontal view of the school house.

This is a copy of the original agreement made between Schoolmaster William Whitefield and students. Students paid $5 per school session, provided the teacher with lunch and produce to help sustain him as well as firewood to keep the schoolhouse warm 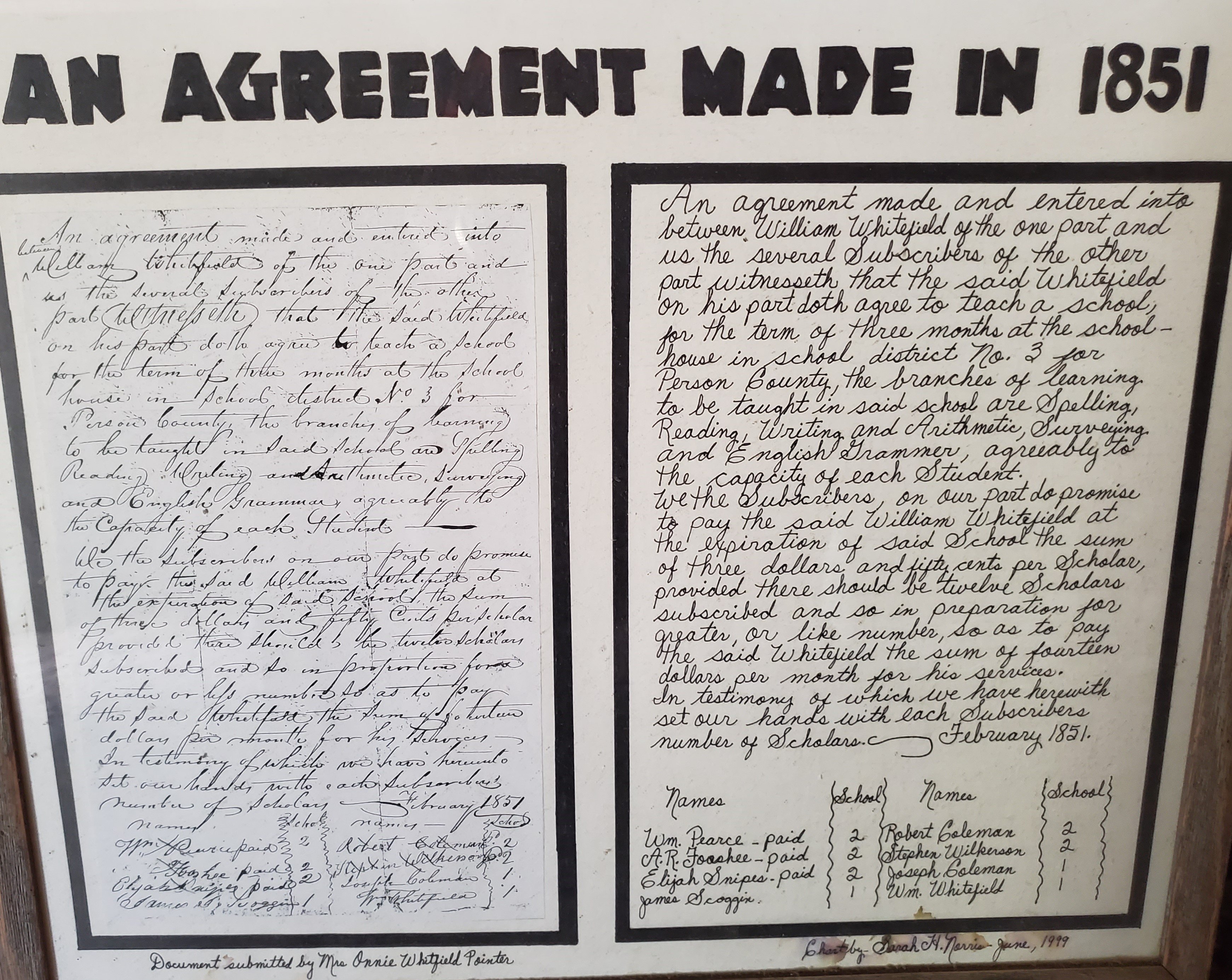 This is a view of the schoolhouse door from the inside. Windows were open holes cut into the logs to provide light and ventilation during warm weather but there was no glass or closures to keep the outside elements out. 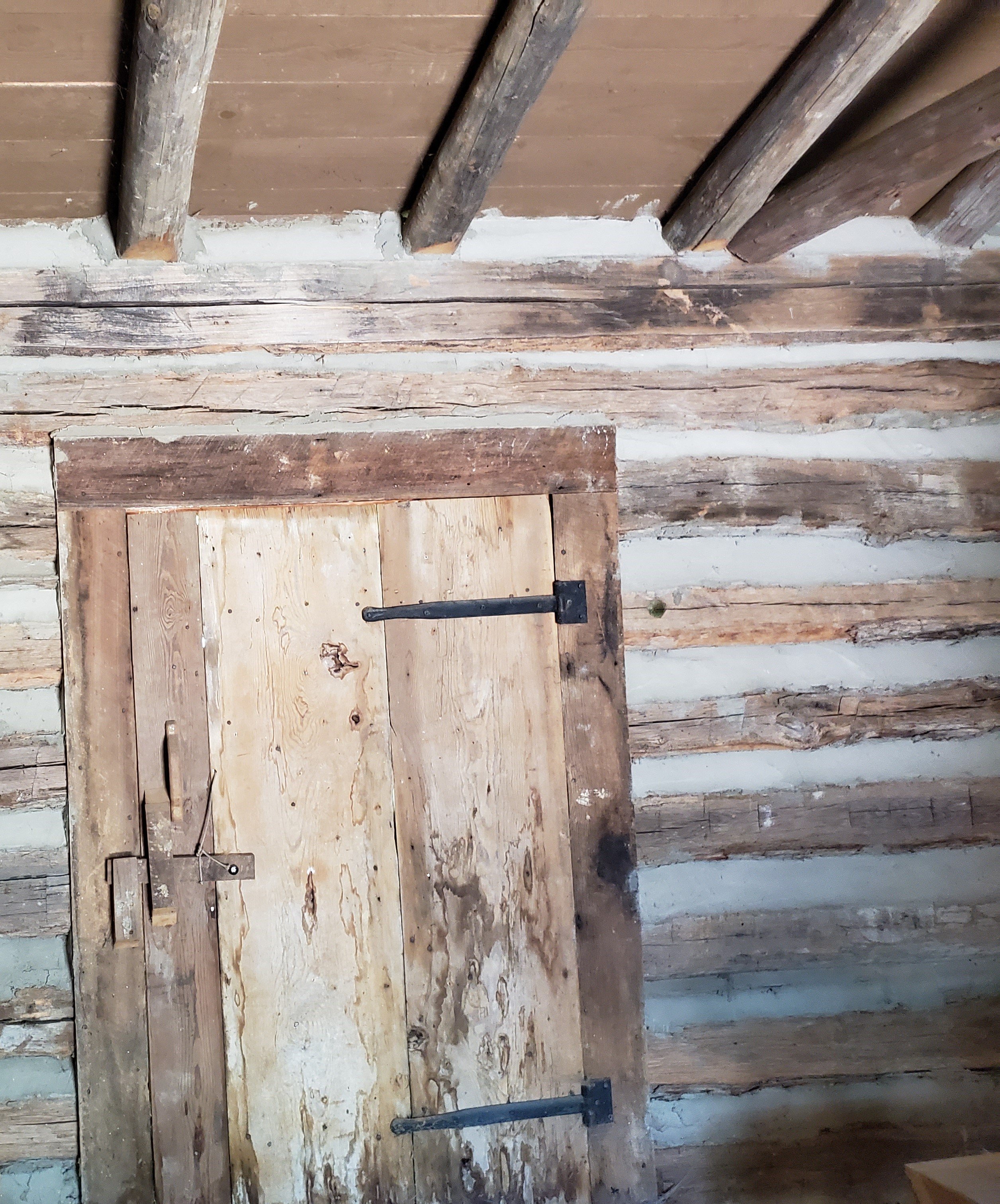 The fireplace crackles as the cold wind blows through and the smell that fills the small, crowded room promises of snow. Schoolmaster Whitefield asks you to head down to the fresh water spring along Flat River to bring back a bucket of water as the lunch break was approaching.  The floor is dirt and muddy near the door.  You walk down the hill to fetch the water as the teacher continues to review the rules,
"6. Gambling or betting at school .......4 lashes
7. Playing cards at school .................10 lashes ... (Van Hook School, 1848)."

The Van Hook Subscription School is the oldest meeting house still standing in Person County and is claimed to be the oldest standing school building in North Carolina. The school was chartered in 1810 as a public boys' subscription school.  Students paid five dollars per session (sessions ran from April 10th through December 25th, five days per week except election day and holidays) per student, according to William Whitefield's teaching agreement, dated February 16, 1819.  The school was originally located near the Paynes Tavern in the Flat River area of Person County. It was commission by Kindle Van Hook, who was an original subscriber to the school.  It has been moved twice from its Paynes Tavern Road location, first the Devereaux Davis Farm and then to the property of C.B. Davis in Allensville before landing to its current location behind the Person County Museum of History on Main Street in Uptown Roxboro, North Carolina.
William Whitefield was only twelve years old when he agreed to teach the boys of some of the wealthier families of Caswell and Person Counties.  Although he had no formal schooling, he learned from his parents and from his own reading.  Subjects taught included spelling, reading, writing, and arithmetic for the $5.00 cost as well as parents had to provide chopped wood for the fireplace and food for the teacher.  Classes added later included gauging, surveying, English, geography, and grammar for an additional cost. Schoolmaster Whitefield taught at the Van Hook Subscription School from 1810 to 1857 but he also became a farmer, Justice of the Peace, and surveyor.  The last year that the school was open is unclear but historical records show that the school was operational at the beginning of the Civil War with its last teacher being Miss Harriet Van Hook, a descendant of the school's builder.
Students in elementary, middle school, and as a mini unit in high school would find exploring and studying the Van Hook Subscription School engaging as part of a local history unit.  In 3rd grade social studies, essential standards 3.H.1 and 3.H.2 could be applied. In middle school, grade 8 essential standards 8.H.1., 8.H.3., and 8.C.1.  In American History I, although there are no essential standards nor clarifying objectives that specifically address local history, this could be incorporated as a mini unit or as part of a larger project.

The Van Hook School. The Person County Museum of History. . Accessed May 30, 2019. https://www.pcmuseumnc.com/van-hook-subscription-school.

Articles of Agreement between William Whitefield and the Subscribers to teach School. February 16, 1819.

Contractual Agreement between William Whitefield and G.D. Satterfield, Chairman of the Board of Superintendents. 1851.

Family History/Genealogy of William Whitefield and his Descendants, 1998.