The Driskill Hotel in Austin was built in 1886 by Jesse Driskill, a local cattle baron who sold the hotel less than a year after it opened. Dignitaries and state officials regularly stayed at the hotel and hosted functions, and Lyndon B. Johnson maintained a headquarters at the Driskill for much of his political career. The luxury hotel served hosted numerous social functions such as state dinners, social balls and the University of Texas homecoming. The hotel almost met its demise in 1969, but a nonprofit organization saved it from demolition by raising $900,000 and purchasing the hotel. In the years that followed the hotel underwent many changes and has been renovated multiple times and continues to serve as one of the city's leading hotels. 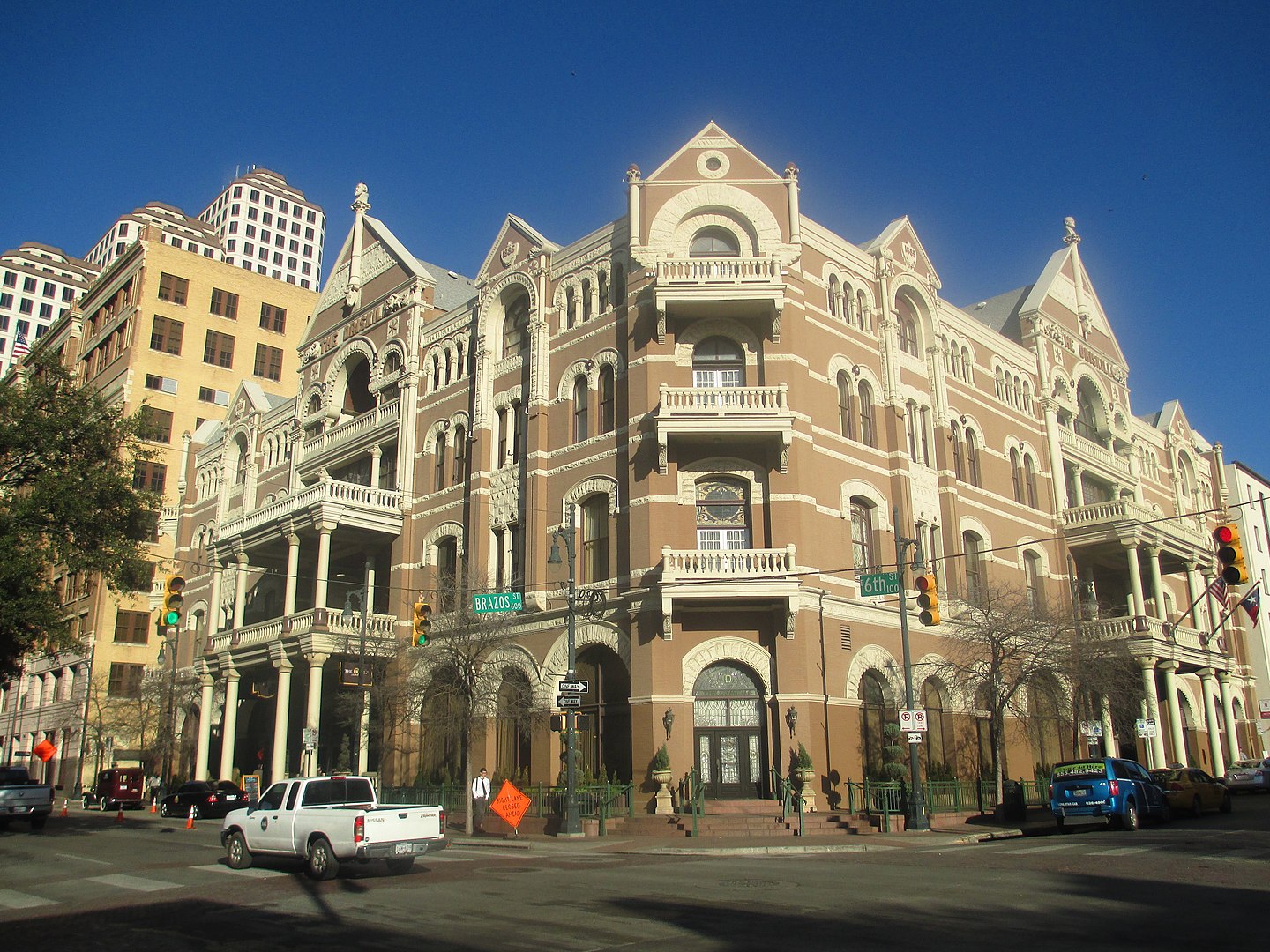 Jesse Lincoln Driskill (1824-1890), born in Sparta, Tennessee, intended that this hotel become the finest in the South. Crystal chandeliers, gold leaf mirrors, and a host of luxuriant decor adorned the ballrooms, and plenty of opulence existed throughout the entire hotel as well.
When Driskill came to Texas in 1849, he entered the merchandising business, but he transitioned to the cattle industry in 1857 and went on to enjoy immense success. During the Civil War, his cattle company supplied beef for the Confederate Army and was one of the first ranchers to drive cattle through the Plains after the Civil War.  By 1871, the wealthy cattle baron moved to Austin, and thirteen years later, in 1884, he proposed his idea for an elegant hotel to city leaders, offering to pay $7,500 for the lots and building located on Bois d'Arc, now found on 7th Street.
By 1885, construction began on the brick and limestone building, which eventually cost Driskill $400,00. Five days before Christmas (1886), the famous Driskill opened its doors to the public. The local Daily Statesmen wrote on December 17, 1886: "What a Bonanza Austin possesses in its new caravansary." In the spirit of urban boosterism -- a common practice in the late nineteenth century -- the newspaper blurb touted Austin as a vacation center in hopes that it would boost tourism and urban growth in Austin.
The first of many formal and state affairs held in 1887 at the Driskill was Governor Sul Ross' inaugural ball. A slew of dignitaries stayed and hosted events at the hotel, As well, for more than thirty years, the Driskill also served as the setting for the University of Texas' annual homecoming ball, an elaborate and lavish event that also included plenty of whiskey offerings.
To most Austin residents, the Driskill stood as an institution. However, Jesse Driskill was not part of most of the hotel's illustrious history. Because Austin remained somewhat of a "Western" town, few could afford to stay in the hotel (for those that could afford it, they rarely appeared in Austin in the 1880s). While hotels in larger cities charged upwards of $1.00 per night, the Driskill charged $2.50 to $5.00 (including meals), a markedly excessive price for most who passed through Austin. With falling profits and the eventual collapse of his cattle business, Driskill closed the hotel in May 1887, less than a year after it opened.
Hotel ownership changed hands many times from 1887 through the first few years of the twentieth century, but most owners discovered it challenging to make money at the hotel. For instance, prominent Austin resident George Littlefield, whose house is a landmark in Austin, purchased the hotel for $106,000 in 1895 and subsequently spent $60,000 on renovations. However, when he finally sold the hotel in 1903, he ultimately sold it for a loss of $25,000.
The hotel underwent another renovation and expansion in 1930, despite the onset of the Great Depression. Four years later, in 1934, future President Lyndon Johnson met his future wife, Claudia Taylor,  during their first date at the Driskill dining room. The Johnsons went on to stay at the hotel dozens of times, and Johnson used the hotel as his campaign headquarters during his congressional career and into his eventual election as Vice President.