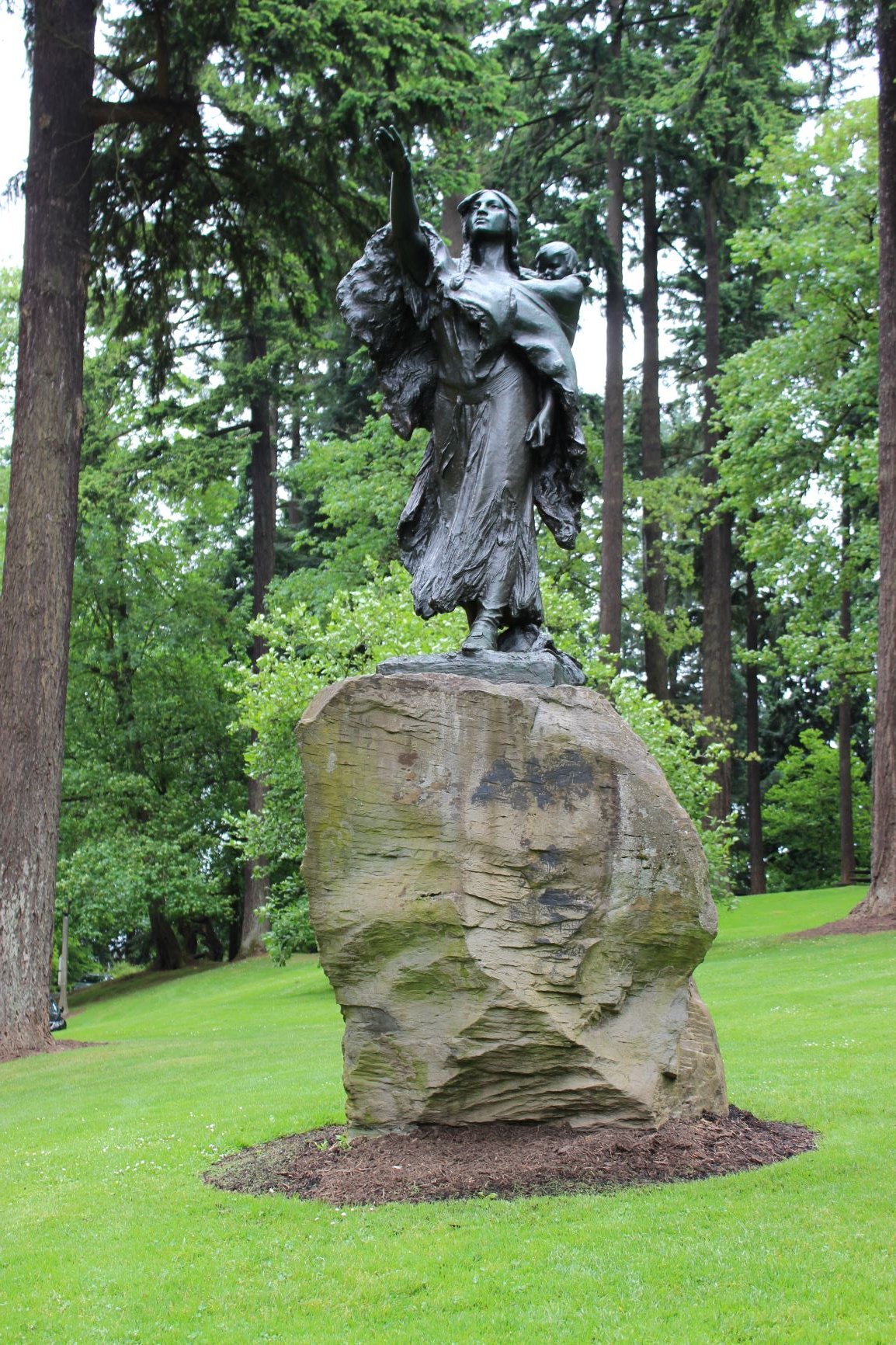 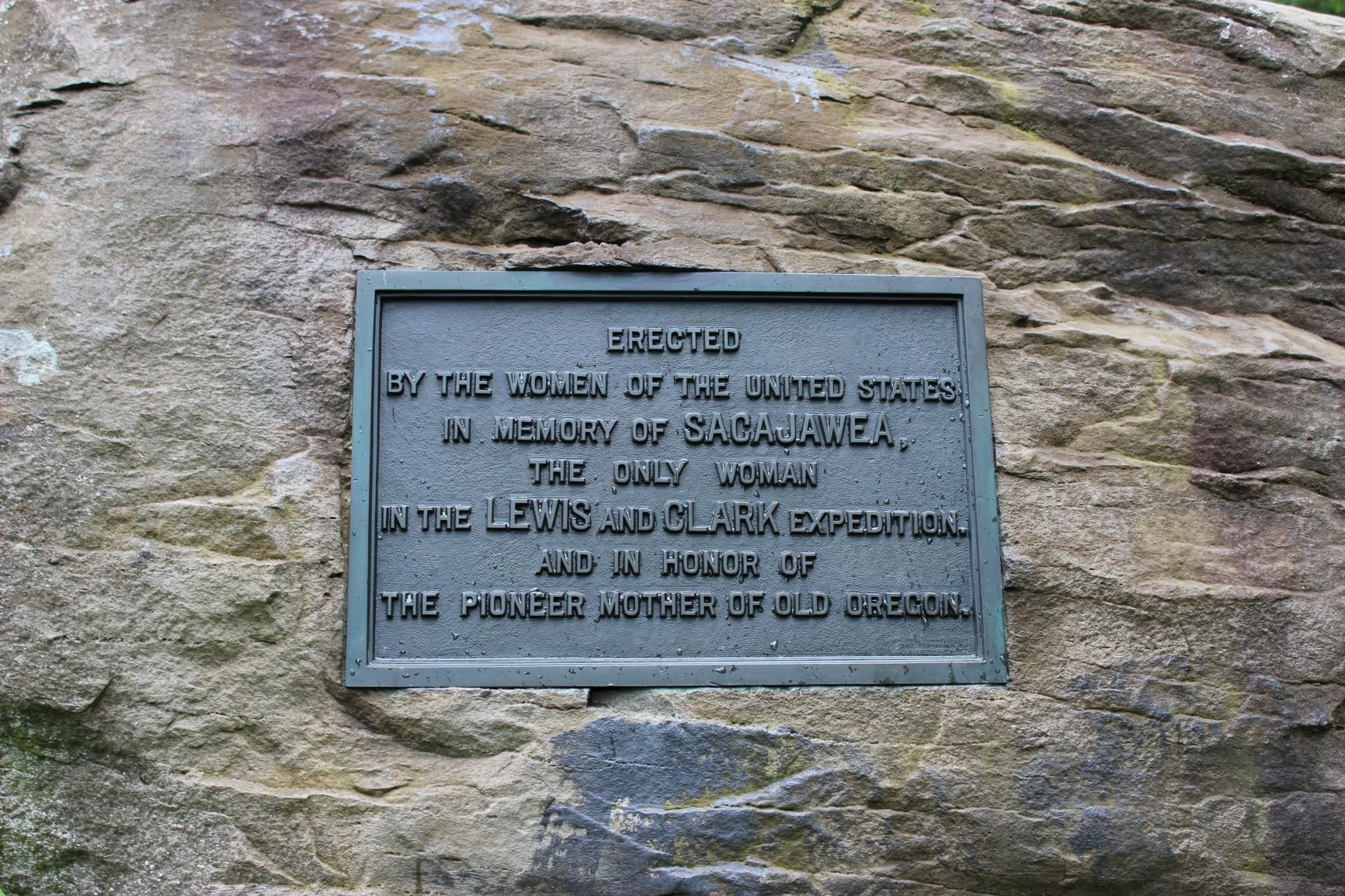 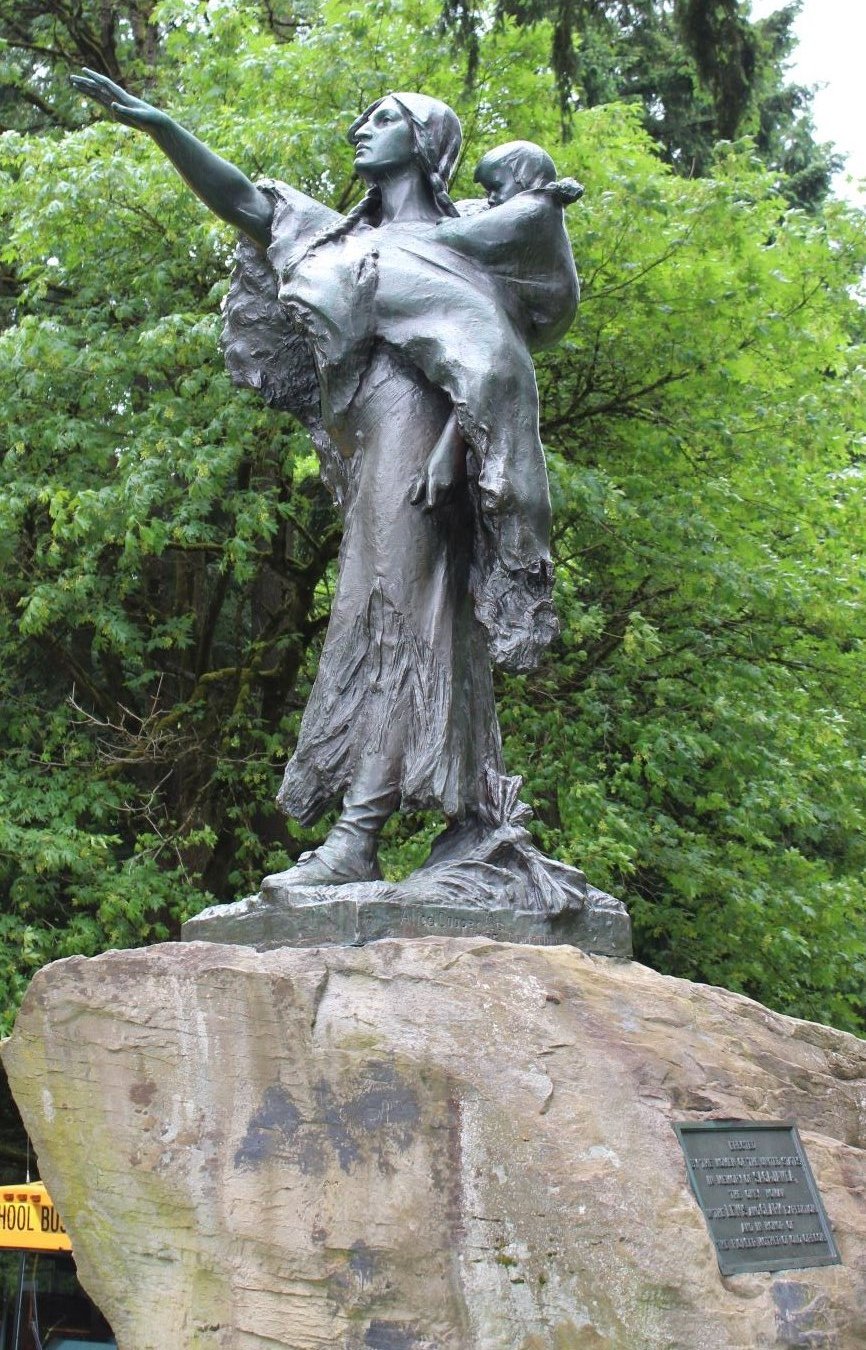 This 1905 statue by Alice Cooper depicts the famed indigenous woman who served as a translator and guide to the Lewis and Clark expedition. White female suffrage leaders considered the statue to be a fitting memorial to the thousands of white women who brought Anglo-American civilization to the Oregon frontier in the mid-19th century.

Portland’s Sacajawea statue was in many ways a feminist project. While most western public monuments commemorated prominent white men, progressive women actively promoted pioneer mother monuments, beginning with this statue. The white Pacific Northwest suffragists that sponsored the Sacajawea statue chose to erect the first bronze public statue of a specific western woman. They sponsored a regional women-only sculpture competition to select its design. Instead of an allegorical female figure like those used in Confederate monuments in that era, the Portland suffragists presented a heroic depiction of a specific female historic figure. And they scheduled its dedication to align with a National American Woman Suffrage Association (NAWSA) national convention and the Lewis and Clark exposition in Portland. National and regional suffrage proponents, including Susan B. Anthony and Abigail Scott Duniway, attended the sculpture’s 1905 dedication.

The white feminist leaders who helped to erect Cooper’s Sacajawea considered it a fitting memorial to the thousands of white women who had migrated to Oregon some half-century earlier. Fundraising materials produced by the Sacajawea Statue Association declared that Sacajawea (more accurately spelled Sacagawea) was “[t]he first pioneer mother to cross the Rocky mountains and carry her baby into Oregon country.”1 Local writer and historian Eva Emery Dye and Portland suffragist Sarah Evans depicted Sacagawea as both a nurturer to westering men and children and as a civilizer—roles that whites typically associated with white women, whom they considered more “civilized.” Local suffragist Anna Shaw went a step further, suggesting that it was white men, rather than Indian women, who were uncivilized.

Dozens more monuments to pioneer women would be sponsored by local elite women in the following decades. However, later commemorations would refuse to accept both Sacajawea's feminist agenda and its use of a woman of color to symbolize frontier motherhood.

Sacajawea’s erectors apparently considered the statue to be a racially progressive project.  Cooper’s heroic statue of Sacagawea celebrated her as a literal and figurative leader to white men. Her mixed-race son represented racial mixing. He served as an allegory of the diverse populations of the West becoming one American people. Yet by choosing Lewis and Clark’s indigenous guide to commemorate white settler women, the monument also contributed to a national narrative about progress and the expansion of white civilization to the West. After all, the statue was erected at the center of the Lewis and Clark Exposition, which explicitly celebrated white westward expansion. Like The Coming of the White Man, which also was displayed at the Lewis and Clark Exposition, Sacagawea became a symbol of indigenous peoples welcoming white settlers. Her son’s dual ethnic heritage pointed to indigenous peoples embracing civilized society. In dominant white thinking of the time, no indigenous woman could serve as an allegory of virtues like liberty. But as the mother of a young mixed-racial child who paved the way to white settlement of Indian lands, Sacagawea could—at least in 1905 Portland—symbolically birth a more civilized nation.

After the fair closed, Sacajawea and The Coming of the White Man were relocated to Washington Park. They now stand near the 1908 Lewis and Clark Memorial Column in Washington Park. Sacajawea’s celebration of pioneer motherhood later inspired the more conservative Daughters of the American Revolution to create the twelve famous Madonna of the Trail statues installed across the United States in the late 1920s.

1 “Ten Reasons Why Women of the Northwest Should Erect a Statue to Sacajawea."  Quoted in Dawson, Jan C. “Sacagawea: Pilot or Pioneer Mother?” Pacific Northwest Quarterly 83, no. 1 (Spring 1992): 27.