Located on Armitage Avenue between Dayton and Halsted, the former Armitage Avenue Methodist Church, briefly known as the People’s Church, was the headquarters for The Young Lords, a Puerto Rican street-gang-turned-activist group founded in Lincoln Park during the civil rights era. While the original building no longer stands, the site is remembered as a landmark of Latino and civil rights history. After a forced occupation of the Methodist church in 1969, The Young Lords took over the building and renamed it to the People’s Church. Led by one of the founders, José “Cha Cha” Jiménez, the group operated out of this space for three years, leading civil rights protests and enriching the Puerto Rican community in Lincoln Park through social programs despite opposition by city government and later, intrusion by U.S. counterintelligence. The Young Lord’s mission spread nationally, gaining them headquarters in over a dozen cities until their informal separation in the 1980s.

A mural outside the People’s Church reading "I have Puerto Rico in my heart" with the group's acronym beneath. Many murals outside the church, including this one, were painted by then 20-year-old activist Felícitas Nuñez of California. 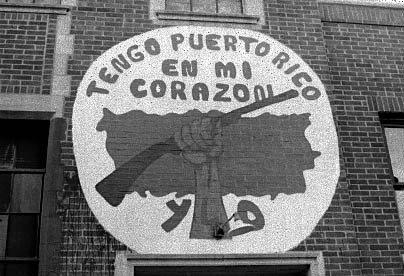 A mural depicting Cuban revolutionary Che Guevara was painted by a group of members, organized by Felícitas Nuñez. The group's admiration for Che's leadership sparked outrage, particularly among Cubans. 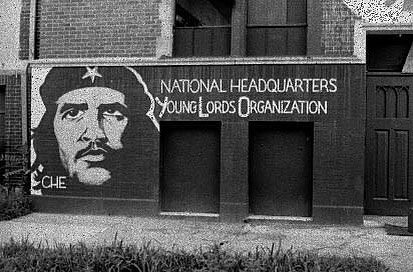 Cha Cha Jiménez, posed at the People's Church, was the visionary and leader of the group until he was arrested in 1970, charged with stealing lumber - reportedly, to fix code violations that shut down the church's clinic. 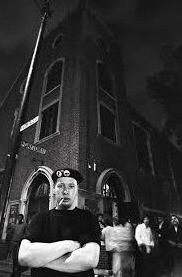 The Young Lords organization was founded out of the Lincoln Park neighborhood of Chicago by seven former street gang members -  José “Cha Cha” Jiménez, who remains the organization’s most vocal and active leader, as well as Orlando Davila, David Rivera, Fermin Perez, Benny Perez, Angel Del Rivero and Joe Vincente. Many of them, as individuals, previously participated in protests against police brutality and housing inequality in Chicago. To understand why the group formed in Lincoln Park, it’s important to consider the history of the neighborhood in the 1960s. The city of Chicago undertook a massive “urban renewal” project, led by then-mayor Richard Daley, that aimed to increase property tax revenues by making many neighborhoods more suburban - their vision was to create “inner city suburbs” to draw in wealthier residents. In the decades before this project began, however, Puerto Ricans’ migration to Chicago had skyrocketed, and many settled in the Lincoln Park area. When Daley’s urban development project began, extreme rent changes and forced evictions disproportionately affected the neighborhood’s Latino population - in some cases, rent increased to over four times the previous rate. Many members of the Young Lords, even years before the group’s formation, were involved in protests and public outcry against these seemingly-racist policy changes. Pushback against these social injustices, as well as a unification of Puerto Ricans over their specific experiences (as opposed to those of a broader Latino community) were the drive for the Young Lord’s reformation from a street gang to a social justice organization with concrete goals for change.

While the Young Lords as a street gang formed in 1960, it wasn’t until 1968 that “Cha Cha” Jiménez decided to steer them towards legitimacy as a politically involved organization, taking inspiration from the Black Panther Party. As part of this legitimacy, the group needed a physical location for their organization. They had been in negotiations with the Armitage Avenue Methodist Church about housing for the variety of social programs the Young Lords wanted to offer to the Puerto Rican community – namely a free daycare center, health clinic, and children's breakfast program. In June 1969, these negotiations went downhill when the group’s demands were met with hostility from Cuban-American members of the clergy because of the Lords’ admiration for Che Guevara – many Cuban expatriates were averse to Guevara for his role in the Cuban revolution, and this created a moral dilemma for the clergymen. As the interaction grew more tense, Young Lords members stormed the church, occupying it against the clergy’s wishes. Police were called, but when they showed up, the church pastor Bruce Johnson called them off by stating that the Lords had permission to be there. He lied in order to prevent physical confrontation and possible brutality against the members. The Lords acquired the space, changing its name to the People’s Church and putting plans in place for their social programs the very next day. After the church yielded to the Lords’ demands and the group established their presence, Rev. Bruce Johnson eventually became an influential supporter of the Lords; he helped to secure funding for their social programs until his untimely murder just months later (a cold case that has yet to be solved).

During the People’s Church’s operation as the Young Lords’ headquarters, it held a variety of social programs established for the community. The Emeterio Betances Free Health Clinic, established at the site, recruited doctors and nurses to serve the Puerto Rican community at no charge – when funds were low, some staff even donated from their savings to keep the service afloat. This accompanied the daycare center and children’s breakfast program, which aimed to not only supplement nutrition, but teach the children about their heritage, playing the Puerto Rican national anthem every morning. Aside from their work in the church, the organization campaigned for public programs to improve quality of life for low-income families. Their activism ultimately made the group a target for surveillance by police, both on-duty and off, who stationed themselves in nearby buildings, outside the church, and even inside the Lords’ meetings, disguising themselves as members in order to gain inside information.

Surveillance and targeted persecution by Chicago law enforcement at the Lincoln Park headquarters was one of the factors that led to the group’s downfall. As the Lords’ mission increasingly narrowed in on protesting Mayor Daley’s urban renewal plans, Daley announced plans to fight a “War on Gangs,” expanding the police’s Gang Intelligence Unit, who later harassed Young Lords members and kept quiet surveillance outside the People's Church, taking note of who frequented. After dozens of members' arrests, often on charges that didn't hold up in court, many historians and Young Lords members theorized that the police’s underlying goal was to waste the Lords’ time and resources on legal battles, slowly wearing the organization down. This method worked – by the early 1970s, some of the main members of the organization, including leader Cha Cha Jiménez, had gone into hiding to avoid pending criminal charges. Aside from external erosion, the Young Lords were also splintering internally; the New York branch broke off from the main Chicago headquarters in 1970, and other cities’ branches aligned with either side. By 1973, the clinic and daycare at the People’s Church were forced to close due to building code violations that the organization couldn’t afford to fix, and they sold the building - under new owners, it later became a Baptist church. With the closing of the church, and both the geographic and ideological separation of the members, the Young Lords’ presence in Lincoln Park vanished.

Ultimately, Richard Daley’s plans for urban renewal succeeded despite massive rallying movements against them by the Young Lords and other civil rights organizations. Looking around the area, there is evidence of this urban renewal in the businesses nearby – often either national chains, or small businesses geared towards a wealthy, white customer base. The site itself, which held a Baptist church after the Young Lords sold the property, was later demolished in 2012 to open a Walgreens on the site. Despite scattered outcries against the opening of the store, there was no organized effort to preserve the site as a historical location. This may be partly owed to the fact that the Puerto Rican presence in Lincoln Park has largely been driven out – today, under 7 percent of the area is Hispanic, far less than Chicago’s overall average of 29 percent. Despite the loss of Lincoln Park as a Latino cultural hub and the scattering of the Young Lords, the organization has had a lasting legacy on Puerto Ricans nationwide. Today, as a "skeleton" organization, their mission carries on in the work of individual members, many of whom stay involved in their communities and continue to push for self-determination and sovereignty of Puerto Rico. Cha Cha Jiménez remains dedicated to the mission of the Young Lords, and encourages others to do the same:

"Every organization has a mission, and our mission has not been achieved yet, so you can't call yourself a former Young Lord when you haven't freed Puerto Rico, or you haven't empowered the people in the barrios."

Cardoza, Kerry. "Once a street gang, then a political collective, the Young Lords celebrate 50 years with a symposium at DePaul." Chicago Reader(Chicago)September 21, 2018.

The Origins of the Young Lords Organization. The Young Patriots and the Original Rainbow Coalition. Accessed May 31, 2019. http://www.youngpatriots-rainbowcoalition.org/ylo-introduction.