Established in 1954, Fort Union National Monument preserves the remains of the third of three forts built as a garrison and trading post for travelers along the Santa Fe Trail in territorial New Mexico a century prior. The first fort was built in 1853 by soldiers and only lasted for a number of years before a second for was constructed by skilled laborers using more permanent methods from July 1861 to June 1862. This fort was abandoned by the end of 1863 but a third Fort Union was built from 1863-64. That fort was operated until the arrival of the Atchison Topeka and Santa Fe Railroad in 1879. 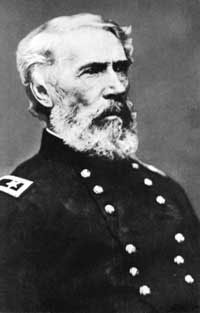 Ruis of the third Fort Union 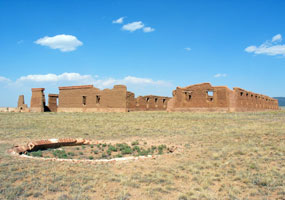 The fort's history begins in 1851 when Colonel Edwin Summers was ordered to take over the defense of New Mexico territory and "revise the whole system of defense." He ordered his soldiers to construct a fort along Coyote Creek but the structure suffered from numerous shortfalls. That fort was replaced by an eight-point star formation by General Henry H. Sibley. A third fort was in operation until 1879.

Visitors to the area can see the ruins of the fort along with wagon ruts along the old Santa Fe Trail that are viewable along a hiking trail. There is also a visitors center operated by the National Park Service.