The South Works steel mill at the mouth of the Calumet River in Chicago was originally constructed as part of Eber B. Ward’s southward expansion of his North Chicago Rolling Mill Company in the early 1880s. With the mill growing rapidly as the city industrialized and the need for railroads increased, J.P. Morgan’s U.S. Steel bought Ward’s company at the turn of the century, soon turning South Works into one of the largest producers of steel in the country. Skyrocketing demand for steel combined with issues with labor unions in the early 20th century meant a large quantity of jobs became available which would end up being filled by Latinx workers, mainly Mexicans. So, the U.S. Steel South Works mill, hereinafter referred to as South Works, served a significant, unquestionable role in growing the Latinx population of Chicago. While most of the buildings of the mill have been destroyed, the land, now deserted, is accessible and of course the impact of the mill on the community is still abundantly prevalent.

A map of the South Works mill at its peak. Clearly, the size of the mill held plenty of workers, workers that would develop and shape the surrounding South Chicago community. Courtesy of Kevin Piper. 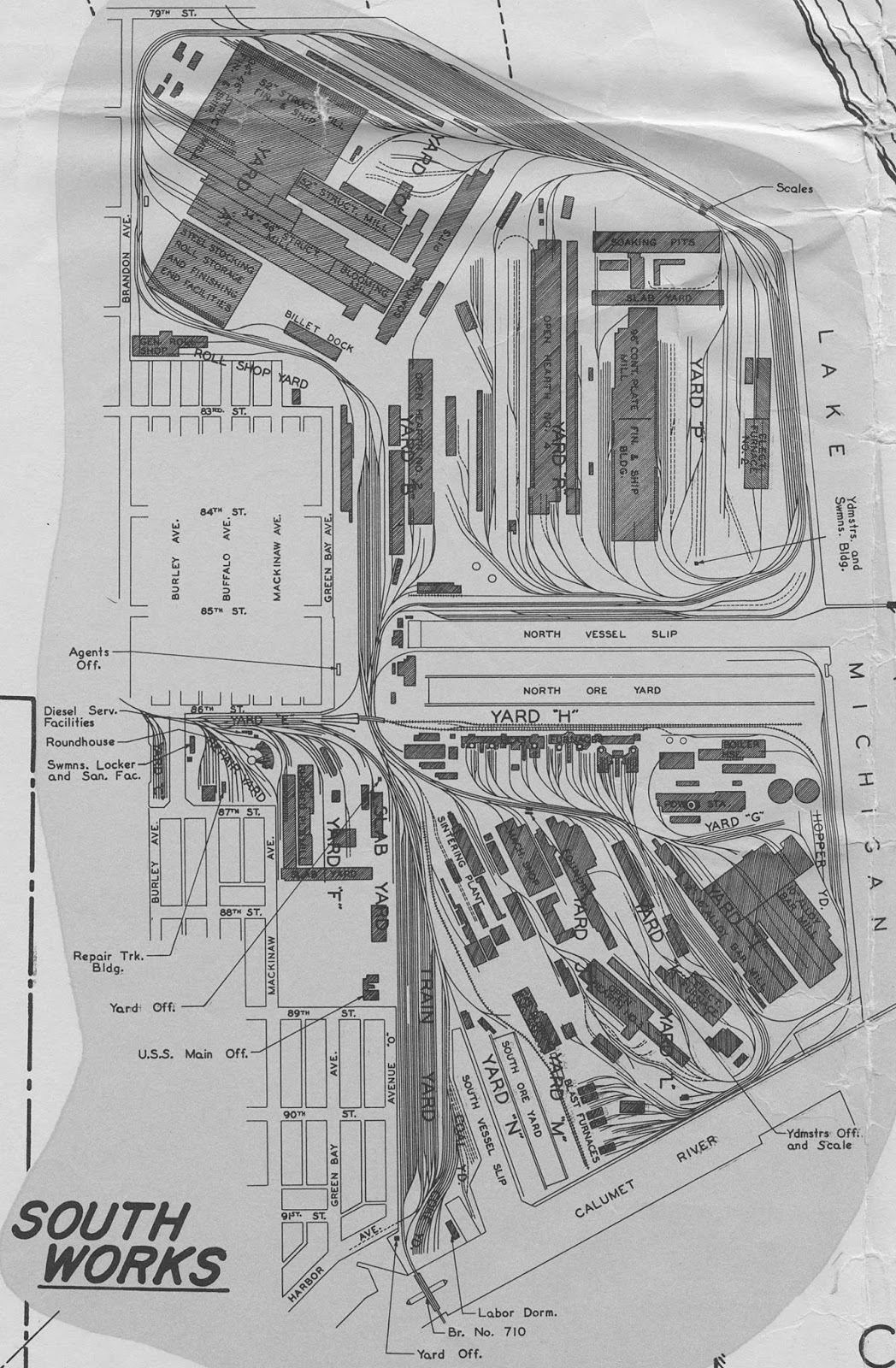 Aerial photo of blast furnaces at the South Works mill. Mexican workers were often delegated to difficult work at such furnaces as the "lowest men on the totem pole." Courtesy of Dennis DeBruler. 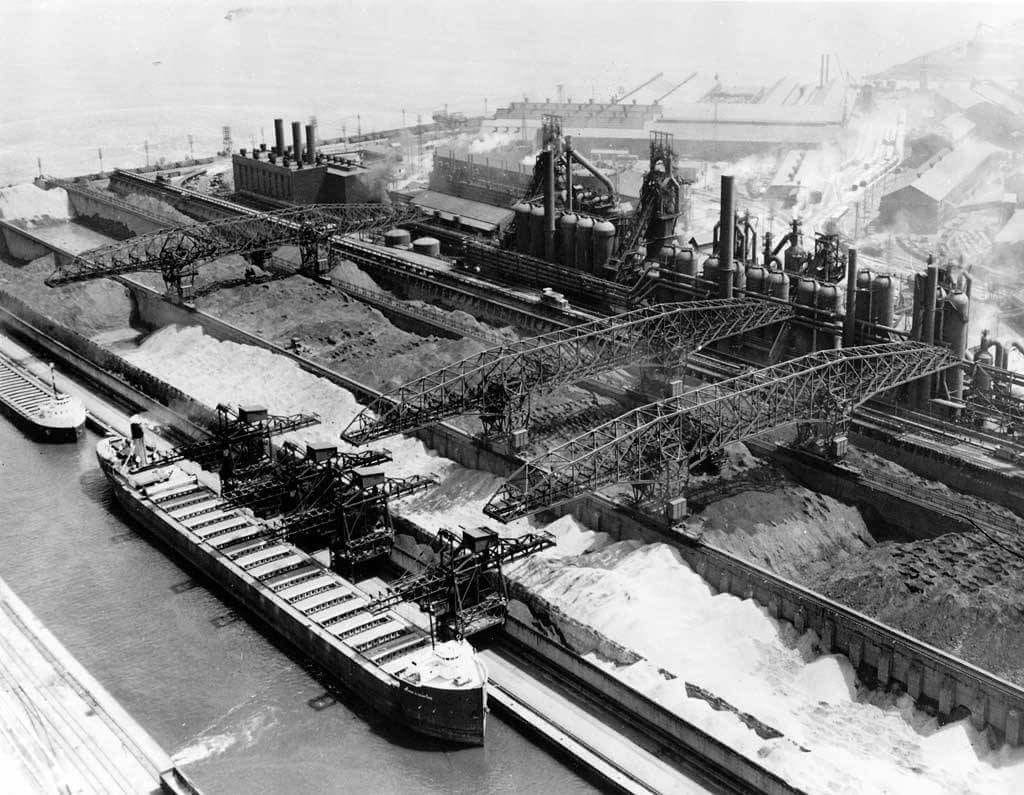 South Works, while originally just a mill, has come to define a large portion of South Chicago. Since its construction in the late 19th century, the neighborhood has risen and (recently) fallen with the growth and decline of the mill. South Works has been a tremendously significant reason for why Chicago “houses the second largest population of Mexican-born immigrants in the U.S.,” drawing immigrants to the city with promises of employment. The mill fits and continues the historical trend of the late 19th and early 20th century of Latinx peoples migrating north in search of economic prosperity. There were two early main waves of Mexican migration to Chicago, both of which are inseparably tied to the growth of South Works and the steel industry as a whole. The first wave was the combination of the Mexican Revolution (commenced in 1910) and the start of  U.S. involvement in World War I in 1917. The second wave was a result of the national steel strike of 1919.

A key component of the first wave was the Mexican Revolution. Due to significant “political, economic, and social turmoil,” close to one million Mexicans left their home country. Of course, not all went to Chicago, but those that made the migration to the city mostly came from the “states of Jalisco, Michoacan, Guanajuato, Queretaro, Zacatecas, Puebla, and Tlaxcala." In 1910, when the Mexican Revolution started displacing Mexicans and forcing them out of the country, U.S. Steel employed close to 11,000 people at its South Works plant. It’s important to note that while the migration north had mainly economic overtones, the growth of the Mexican population in Chicago “redefined racial and national identities” in the Midwest where the Latinx population had previously been very small to non-existent.

The second component of the first wave of Latinx immigrants to Chicago as it pertains to South Works was the beginning of U.S. involvement in WWI. Mexicans essentially became necessary labor during the war, permanently altering the “ethnic composition of the South Chicago community” because of “labor recruitment by the nationally based steel corporations” like U.S. Steel. The South Works mill was approaching its peak capacity during WWI due to the high demand for steel for wartime activities and infrastructure, employing around 20,000 people and covering close to 600 acres of land in South Chicago.

The second large wave of Mexican immigrants to Chicago happened in 1919 during the National Steel Strike. Unsatisfied with the operations of the United States Steel Corporation, “75,000 to 80,000 steel workers out of about 100,000 in the Chicago district” peacefully went on strike. Of course, this succeeded in temporarily shutting the South Works mill. But U.S. Steel obviously wanted to keep operating and sought Mexican laborers, at that time generally more willing to work for lower wages, to fill in for those on strike. This served as a catalyst for Mexican population growth in Chicago, however this growth was not without consequence. There was an increase in anti-immigrant sentiment in the city, where union workers saw the Mexicans migrating north as “scabs.” John Walker, former President of the Illinois State Federation of Labor articulated this sentiment through threats, addressing a large crowd of steel workers telling them “when you meet a ‘scab’ don’t treat him gently."

In 1935, Chicano workers were instrumental in the creation of a South Works union called Local 65, a chapter of the Steel Workers Organizing Committee. Campaigning for more stable production schedules and opportunities for promotion at the mill, Mexican workers led by Alfredo Avila and Manuel Garcia composed 11% of the union despite composing only 5% of the total working population and voted in union elections at an 88% rate compared to the general rate of 54%. So, not only was South Works a catalyst for Mexican population growth in Chicago, it was the site of one of the first efforts of Mexican unionization and fostered community growth.

The U.S. Steel South Works mill has established quite the legacy in Chicago. From its peak of 20,000 workers, the mill was eventually shut down in 1992 with only 700 workers on the payroll following a sharp decline in the demand for steel and a series of massive layoffs. The neighborhoods surrounding the mill went with the mill, growing massively as it grew and fading significantly as the plant declined. South Chicago was once a booming community but is now struggling economically and socially. Plans for redevelopment of the South Works land including proposals for the construction of a massive residential community and large business developments have so far failed to come to fruition. Despite the general decline of the neighborhood, the South Works Steel Mill will have a lasting legacy as a key catalyst for Latinx population growth in Chicago and as a fundamental continuation of the trend of Latinx migration into the Midwest in the early 20th century.