Founded in 1970, Casa Aztlan was a Mexican-American community and cultural center located on 1831 Racine Avenue. It replaced the Howell Neighborhood House, a settlement house which Pilsen residents found ineffective at addressing the needs of the largely Latinx community. Casa Aztlan was the center of community organizing and activism from 1970 until it closed in 2013. It even became a launching point for the activities of the Chicago chapter of the Brown Berets, a militant Chicano civil rights organization, in the mid-1970s. Casa Aztlan also provided an important space for local artists, and hosted muralists such as Raymond Patlán and Marcos Raya, who helped to create the beautiful murals on the inner and outer walls of the building. Sadly, by the 2010s, Casa Aztlan began to lose funding for programing and upkeep of the building, and due to an accumulation of debt, it was forced to close in 2013 and is no longer functioning or open to the public. After its closure, the new developer turned the center into an apartment complex and whitewashed the building, completely destroying the original murals. This highlights the very real and ever present threat of gentrification in the Pilsen neighborhood. Although the original mural on the front of the building was successfully repainted in 2017, the space is not the same as it was before the center closed. However, Casa Aztlan lives on in the memory of the Mexican-American and wider Latinx community of Pilsen as a center for cultural pride, activism and community engagement.

Repainted in 2017, a new mural modeled after the original now covers the front of what used to be Casa Aztlan (Credits: Elena Andrews, 2019) 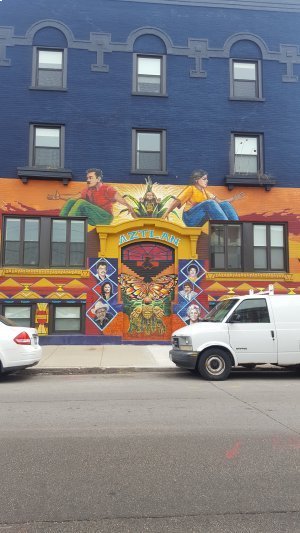 The right side of the old entryway to Casa Aztlan depicts new portraits of contemporary local activists (Credits: Elena Andrews, 2019) 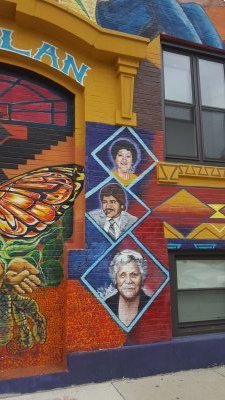 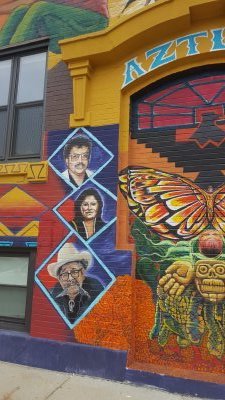 The old doorway that once led visitors inside Casa Aztlan is repainted with symbols from the original mural, including the black Aztec eagle (Credits: Elena Andrews, 2019) 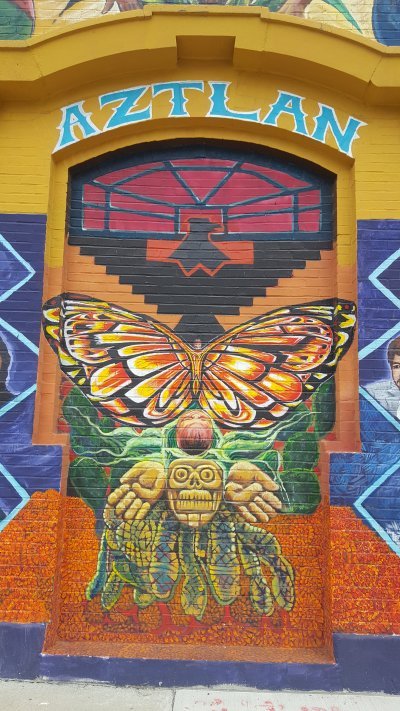 The original mural which once covered the front entrance to Casa Aztlan before it was painted over in 2017 by the new developer (Credits: Dr. Margaret LaWare, 1991) 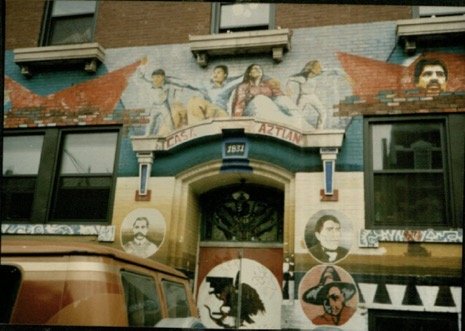 A mural that once covered an interior wall at Casa Aztlan, painted by Marcos Raya and depicting community members marching under the red flag of the Huelga (strike) (Credits: Dr. Margaret LaWare, 1991) 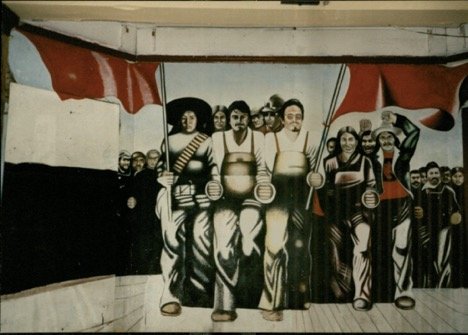 Walking through the streets of Pilsen today, the bright mural that covers the front of 1831 Racine Avenue stands as a remembrance of Casa Aztlan, which used to be a vibrant space of community organization, serving to celebrate and sustain Mexican culture and identity in the neighborhood. It focused on art as a means of uplifting and engaging the community, and also provided services to community members and recent immigrants. Furthermore, Casa Aztlan was a part of the Chicano civil rights movement of the 60s and 70s, cultivating activists and serving as a home for civil rights organizations in the area. Since it was such an integral part of the community, Casa Aztlan fought in the past to maintain the integrity of the Pilsen neighborhood. Sadly, its recent closure serves as a symbol of the intrusive and almost unstoppable nature of urban gentrification.

Casa Aztlan was created specifically to serve the Mexican American community of Pilsen, as well as support recent Mexican immigrants. In a Chicago Tribune article from 1993, then director of the center Cynthia Chico-Rodriguez noted that “[o]ur goal is to promote self-determination of the Latino community through leadership development, advocacy and direct services” (Mills 1993). Casa Aztlan’s direct services included English as a second language classes, literacy programs for kids and adults, and seminars on immigration and employment discrimination laws. Casa Aztlan also offered after-school programs for youth in the community, both to prevent school dropout and to foster an appreciation for Mexican heritage (Mills 1993). There was also a health clinic attached to the Casa Aztlan center called the Benito Juarez clinic, which was created in 1972 and provided free healthcare to everyone in the Chicago area, specifically serving those without medical insurance (Brown Berets 2019). Casa Aztlan also provided art classes for the community, as well as spaces for local artists to create their own artwork, take workshops and teach classes. For example, in 1981, the center offered classes to the community in silk screening, ballet (taught by Ballet Folclorico Alma de Mexico), Kapulli Koakalko (Aztec culture/art workshop), theater, drawing and mural techniques (Salinas 1981).

In addition to providing services to the community, Casa Aztlan also became a site of social and cultural activism. The creation of Casa Aztlan itself was the product of the Chicano civil rights movement of the 1960s and 70s. The Chicano Movement was defined by political and social mobilization, as well as an embrace of Mexican cultural nationalism, political self-determination and independence. Chicano activists sought to reclaim “Aztlan,” the “mythical” homeland of Mexican-Americans consisting of all the original territory that once belonged to Mexico. The name Casa Aztlan itself reflects this nationalist vision of “el movimiento,” as “casa” means “house” in Spanish and “Aztlan” references the Chicano homeland. During the 60s and 70s in Chicago, the neighborhood of Pilsen, and Casa Aztlan specifically, became “the center of the Mexicano/Chicano Movement in Chicago” (Ramírez 2011, 18). As activist María Gamboa puts it, Casa Aztlan was “the Mecca of the Chicano Movement in Chicago… Casa Aztlan was trying to live that philosophy of self-determination, the whole concept of the Chicano movement” (2011, 86). Civil rights groups such as the Young Lords (only very briefly) and the Chicago chapter of the Brown Berets organized their activities from Casa Aztlan. The Brown Berets were a militant Chicano activist group who fought for, among other things, political and economic self-determination, as well as better education, housing and jobs for Mexican-Americans. The Brown Berets established the Benito Juarez Clinic connected to Casa Aztlan in 1972. They also eventually took over leadership of Casa Aztlan in place of the original church-based founders. According to Jessica Pupovac in her article The History of Pilsen, the Brown Berets “turn[ed] it into a completely independent hub of community and political organizing. They ran it with an all-volunteer staff and provided affordable housing for artists and activists… and a meeting space for throngs of young radicals” (2019). Casa Aztlan bred activists who became part of Chicano activist organizations in the area, such as The Comité, which had strong female leadership (Ramírez 2011).

Casa Aztlan provided a visual as well as physical space of culture, activism and community through the vibrant murals that once covered the inner and outer walls of the building. Local Chicano muralists, including Raymond Patlán and Marcos Raya, used bright colors, symbols such as the black Aztec eagle, imagery of Chicano history and portraits of local Chicano families and community members in the murals (LaWare 2008, 237). Raymond Patlán painted many of the first interior and exterior murals at Casa Aztlan, however the front exterior of the building was painted by Marcos Raya along with Salvador Vega and Carlos Moth Barrera. This mural can be seen in the fifth photo shown above. In the mural were portraits of Chicano/Latinx historical figures such as Che Guevara, Emiliano Zapata and Ceasar Chavez, as well as images of everyday Chicanos and their families. On the front door, the black Aztec eagle, used in the strike flags of the United Farm Workers, provided a powerful gateway into the center. Marcos Raya also painted a mural inside the building which depicted community members marching proudly, brandishing the red flag of the “Huelga” (strike) with the black eagle upon it. These murals were important as they validated Chicano/a identity and history, and established a visual sense of place and belonging in the community. Dr. Margaret LaWare argues that “the murals transform a generic urban space into one that illuminates and affirms the history, traditions and aspirations of the Chicano/a people who live there” (LaWare 2008, 232). The murals also encouraged community activism towards liberation, one of the main goals of the Chicano Movement.

Unfortunately, the original murals of Casa Aztlan were destroyed after the community center closed in 2013. The center lost the building due to a shrinking supply of funds and "mismanagement" on the part of center director Carlos Arango (Serrato June 2017). However, journalist Jacqueline Serrato notes that the heads of Casa Aztlan felt that "the added value of the property and developers ready to buy--both symptoms of gentrification--made the center more difficult to save" (June 2017). The building was bought by Andrew Ahitow, a developer and owner of the company City Pads LLC, who has turned the building into an apartment complex in spite of community calls for affordable housing. In 2017, Ahitow painted over the iconic front mural of Casa Aztlan with gray paint, causing outrage among community members. The erasure of the mural served as a tangible symbol of gentrification, which threatens to push out the Latinx community of Pilsen. Pilsen has faced the threat of gentrification often throughout its history; in the mid to late 1970s, the Chicago Central Area Committee developed an urban renewal plan for the Pilsen neighborhood, but the Pilsen Community Planning Council, alongside Casa Aztlan, fought back and successfully stopped the plan from coming to fruition. This fighting spirit remains strong in Pilsen today. In the summer and fall following the repainting, the Pilsen Alliance organized the community and convinced the developer to allow Raymond Patlàn, one of the original muralists at Casa Aztlan, and other local artists, to repaint the front of the building. Completed in December of 2017, and still visible today, the new mural stays true to the original design, however the portraits of Latinx/Chicano figures have been updated to depict contemporary local activists and leaders.

Although it no longer remains, Casa Aztlan leaves a lasting legacy for the Mexican American community of Pilsen; it was a space where Chicano/a identity, and Chicano/a culture, were validated and empowered. Casa Aztlan was an irreplaceable center of community. Robert Valdez, a current resident of Pilsen, reflects on Casa Aztlan in an interview with Jay Shefsky of WTTW Chicago, expressing that “[i]t was everything to us. It was the focal point of so much activity” (2017). The closure of Casa Aztlan is seen by many Pilsen residents as a sign that outside forces are attempting to push the Latinx community out of the neighborhood. But the strength of community voices in response to the closure of Casa Aztlan, and their success in recreating the original front mural, shows resiliency among the Latinx community of Pilsen even in the face of gentrification.

Created by Elena Andrews (Instructed by Emiliano Aguilar AND Geraldo Cadava, Northwestern University) on May 31st 2019, 12:48:51 am.