The Little Village discount mall is in La Villita, which is a two-mile shopping district on 26th street in Chicago. Opened in 1991, the mall holds over one hundred mainly Mexican-owned booths that sell items like Quinceanera dresses, jewelry, religious paraphernalia, and traditional Mexican clothing. In the 1990s, this area became a ‘port of entry’ for Mexican immigrants arriving in Chicago. The Little Village discount mall’s role as a port of entry for immigrants makes it a historically significant place where Mexican culture and businesses have flourished. It is publicly accessible. 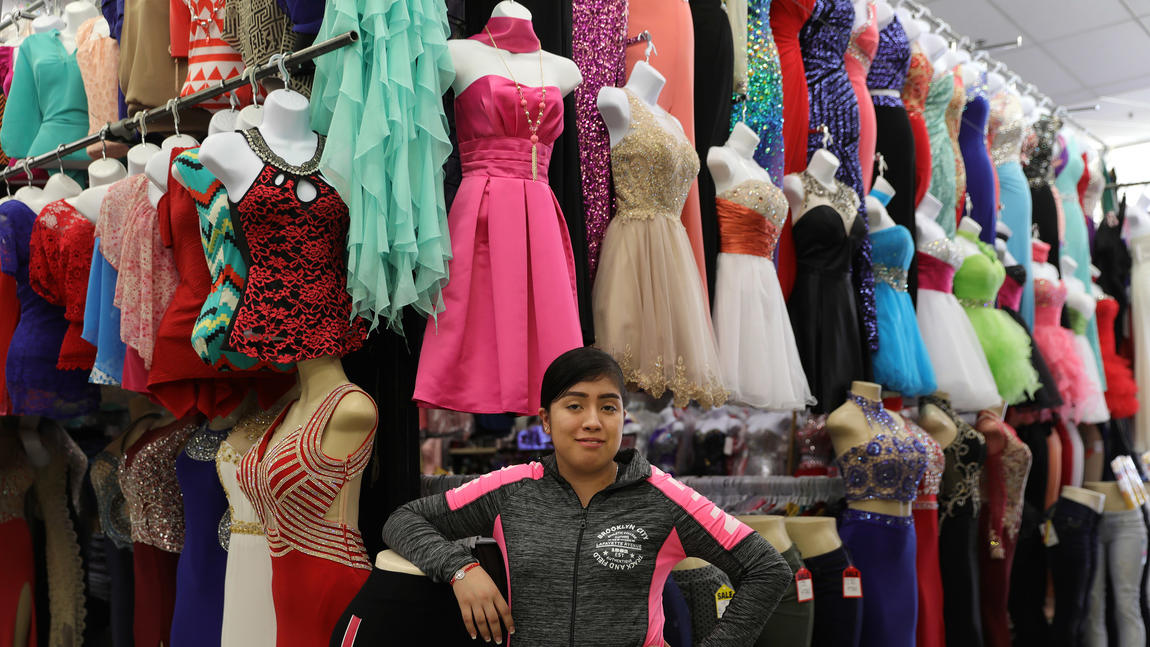 Traditional clothing like boots and cowboy hats, an ode to the Southwest, can be found at many stores in the discount mall. Source: Ahrensdorf, Lucia. Little Village. South Side Weekly. October 01, 2014. Accessed May 30, 2019. https://southsideweekly 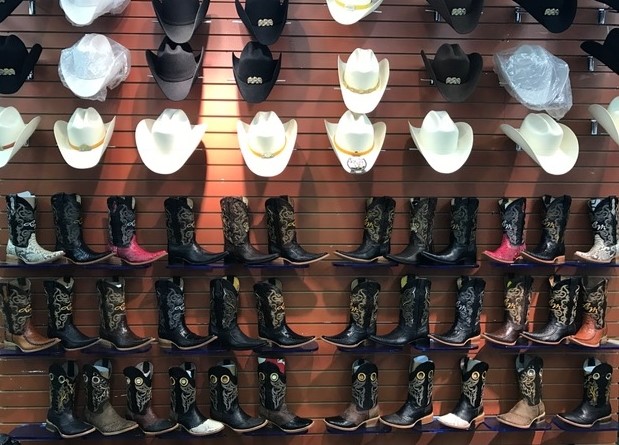 Many come from all over the Midwest for goods that are usually only found in Mexico, like the displayed Mexican candies. Source: Little Village (La Villita). The City of Neighborhoods. November 14, 2016. Accessed May 30, 2019. http://www.thecityofnei 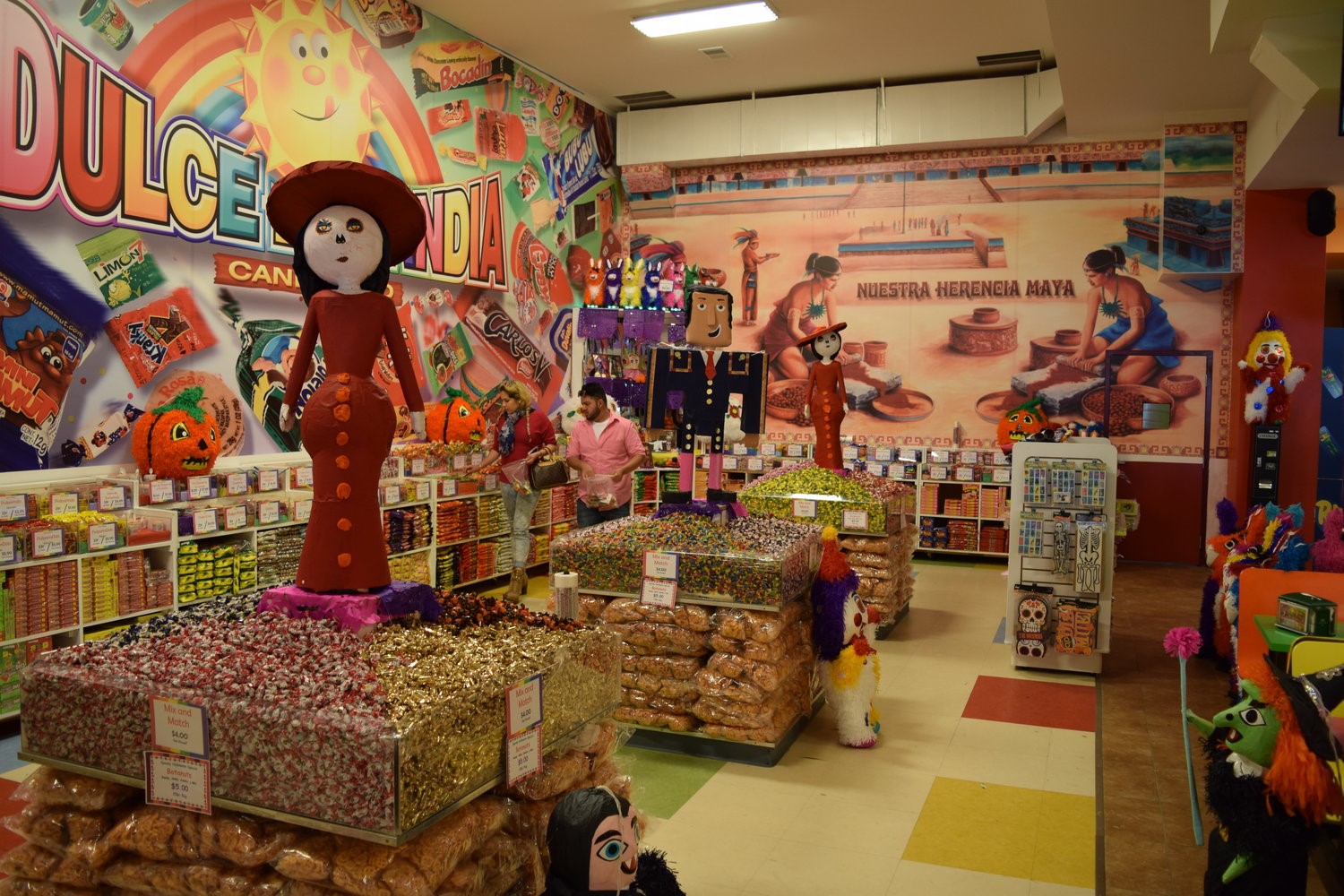 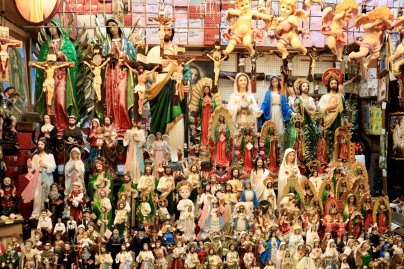 The signs leading to the discount mall are all in Spanish, exhibiting the concept of Latino Urbanism as Latinos re-appropriate the area to reflect their language and culture. Source: Landwehr, Amanda. Little Village Gains Financial and Cultural Profi 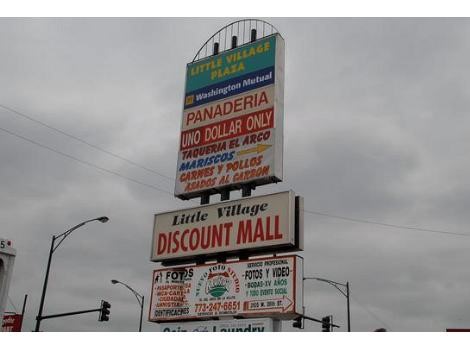 The Little Village’s demographics shifted over time to become predominantly Latino. This change is the result of industrialization, the creation of the suburbs, and racial tensions in Chicago. German, Irish, and Eastern European immigrants began populating the area that would become known as La Villita after the Chicago Fire, which displaced many. This re-migration occurred during the peak of the industrial revolution. As the prevalence of factories grew, Chicago urbanized. This combined with the displacement caused by the Chicago Fire created a vibrant Eastern European urban community. By 1914, the area was vastly overpopulated and had few vacant lots. Although a close-knit community had been created, overpopulation as a result of industrialization, the creation of the suburbs, and race relations caused Eastern Europeans to begin leaving the area.

As companies like the McCormick Harvesting Machine Company and Western Electric’s Hawthorne Works began building factories in the area, more people began settling in this urban district. This overcrowding led to the steady decline of the original Eastern European population. These residents gained economic mobility and began traveling past the city limits to escape urbanization. The increasing urbanization also attracted African Americans to the area. Many of the original residents of the Little Village saw this as another negative consequence of urbanization and moved away in order to avoid integration. The emigration of Eastern Europeans prompted an influx of Latinos to move into the Little Village.

The movement of Latinos into the Little Village reflected broader immigration trends. At first, most of the Latinos who moved to La Villita were mostly migrants from Pilsen who had been relocated due to the expansion of The University of Illinois in Chicago.  Not many immigrants moved to the area due to increasingly harsh U.S. immigration policies as a result of the Great Depression and demands to prioritize employing American citizens. However, this decline in immigration was reversed after policies like the Bracero Program and family reunification reencouraged many to come to the U.S. Soon, La Villita was not only a community of Mexican migrants from Chicago but also a gateway for new Latino immigrants coming into the U.S. This pattern of migration helped transform La Villita into the Latino cultural epicenter that it is today.

Today, the staple that embodies the Mexican heritage and history of La Villita is the discount mall. According to a representative of the mall, it opened in 1991. La Villita’s discount mall attracts customers from all over the Midwest and has become the second highest grossing shopping area in Chicago. The excitement over the Discount Mall lays in its wide variety of highly sought-after Mexican goods. These booths are almost entirely Mexican-owned and sell a diverse range of goods like Mexican baked goods, soccer paraphernalia, boots, mariachi suits, First Communion and Quinceanera dresses, and rosaries. There are also puestos selling a variety of Mexican culinary staples like elote, antojitos, and tamales. Latin Urbanism is an idea coined by James Rojas that “describes the myriad of ways that immigrants from Latin American are remaking American cities to feel more like places from which they came.”  The discount mall perfectly embodies this concept. Mexican immigrants have created a space for themselves in which their culture can re-flourish in the U.S. through the exchange of cultural goods.  According to a representative of the mall, the space the mall occupies used to be Sears store. The transition from a large U.S. retailer to a discount mall featuring local vendors illustrates the larger demographic changes of the Little Village. Latinos moving to the area increasingly wanted to see stores they were familiar with, not big U.S. chains. This creation of a Latin urban space within the U.S. is an illustration of the importance of the discount mall.

La Villita’s discount mall is significant because it is an example of an unassimilated area of the U.S. that serves as a port of entry for immigrants and it is a place where Latino-owned businesses thrive. Locations that represent the concept of Latino Urbanism are critical to retain Latino cultural values and practices. The Discount Mall serves as an authentically Latino place that celebrates diversity in the U.S. and Mexican culture. Its cultural development is linked closely with the development of immigration policies and patterns in the U.S. and it acts as an important symbol of Mexican communities in the U.S. The executive director of the Little Village Chamber of Commerce sums the discount mall's impact up well, "it's the place you go to buy stuff that reminds you of home or your grandpa. This is the place where Spanish is spoken, where you feel Mexican." In addition to the importance of an authentic cultural space, the discount mall is also a place where Mexican businesses flourish. This is significant since it empowers the Mexican minority community. Supporting minority-run businesses is necessary to keep spirits positive in the U.S. at a time when many minority groups feel threatened. These two factors illustrate the cultural and economic significance of La Villita’s most beloved shopping mall.

La Villita’s Discount Mall is a staple representing ethnic pride and Latino economic mobility. Although it reflects positivity and the actualization of the American dream, La Villita and its discount mall also illustrate the inequities Latinos still face. Most of the community is uninsured, the income average is in the lower 30% of Chicago, and 70% of its residents do not have a high school education. Business has also been suffering since many have been deterred from shopping in the area due to fears of deportations after a massive Immigration and Customs Enforcement raid. In a neighborhood with a high population of undocumented immigrants, fears of I.C.E raids have deterred many from shopping and have had huge negative ramifications, according to Khodr Kaddoura who owns a clothing shop inside the mall.  The discount mall is an important historical landmark representing both how far Latinos in the U.S. have come and how much more work there is to be done.