Artist Hector Duarte’s home studio at 1900 W. Cullerton Street, where Duarte paints and works on his art, is covered on three sides by his 2005 mural “Gulliver in Wonderland.” The mural is located in one of Chicago’s biggest Latinx neighborhoods, Pilsen, and is a representation of the immigrant narrative. It depicts a Latinx version of the title character from Jonathan Swift’s "Gulliver’s Travels" trying to break free from barbed wire chains. “Gulliver in Wonderland” is based on a smaller mural that Duarte completed in 1986 on Bishop Street entitled “Gulliver en el país de las maravillas,” which was destroyed. While the interior studio is typically not open to the public (events and workshops held there are an exception), the mural is one of Pilsen’s most popular and is accessible to all.

Hector Duarte stands in front of one of his murals (courtesy of the Chicago Architecture Center). 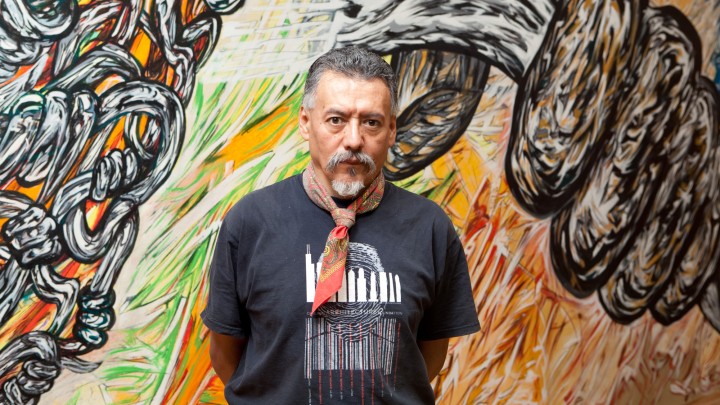 Hector Duarte's home studio, covered by the mural "Gulliver in Wonderland," is located at the corner of Cullerton and Wolcott in Pilsen (courtesy of Eric Allix Rogers). 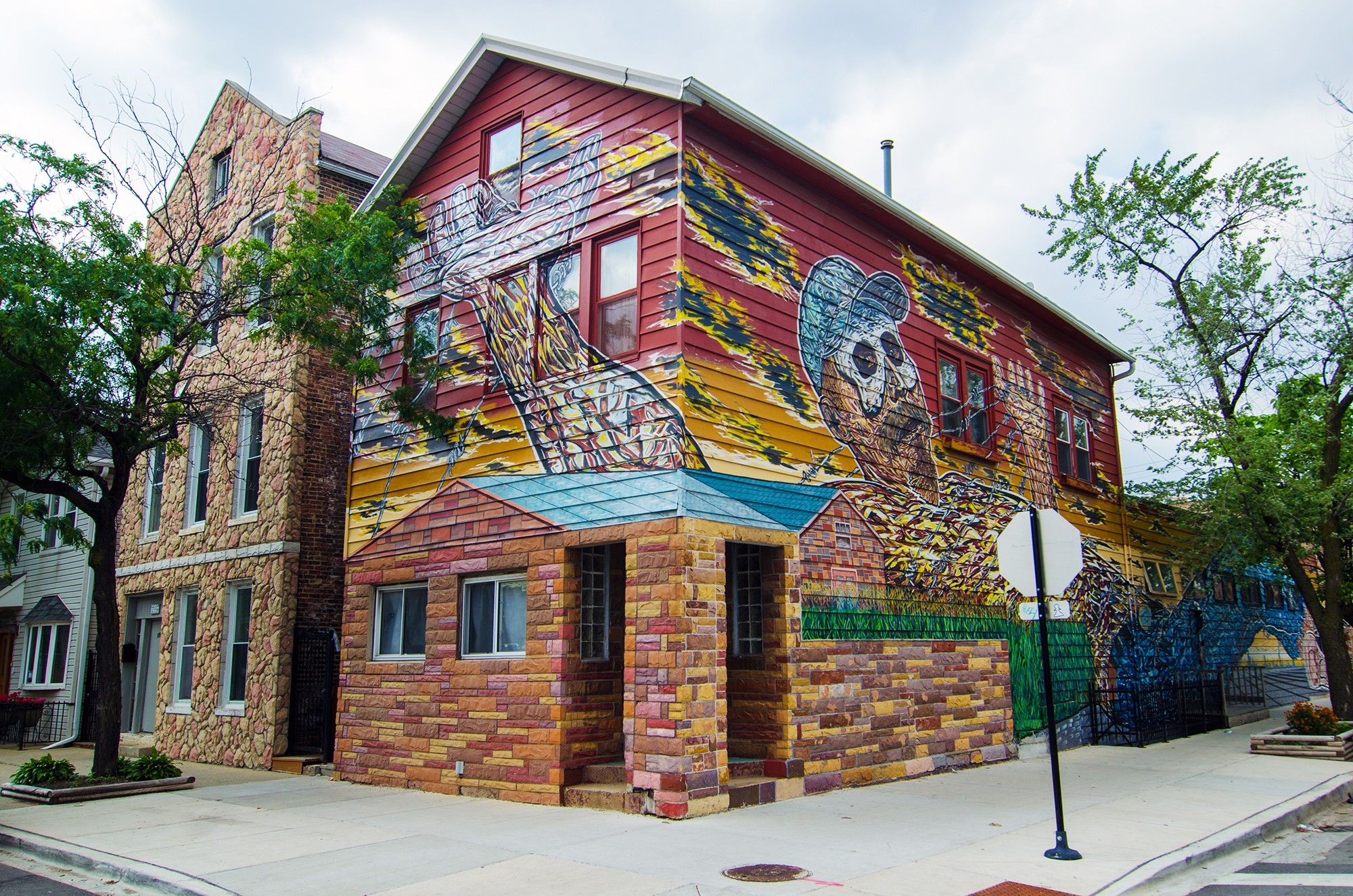 Inside his studio, Hector Duarte paints and stores some of his works of art (courtesy of Eric Allix Rogers). 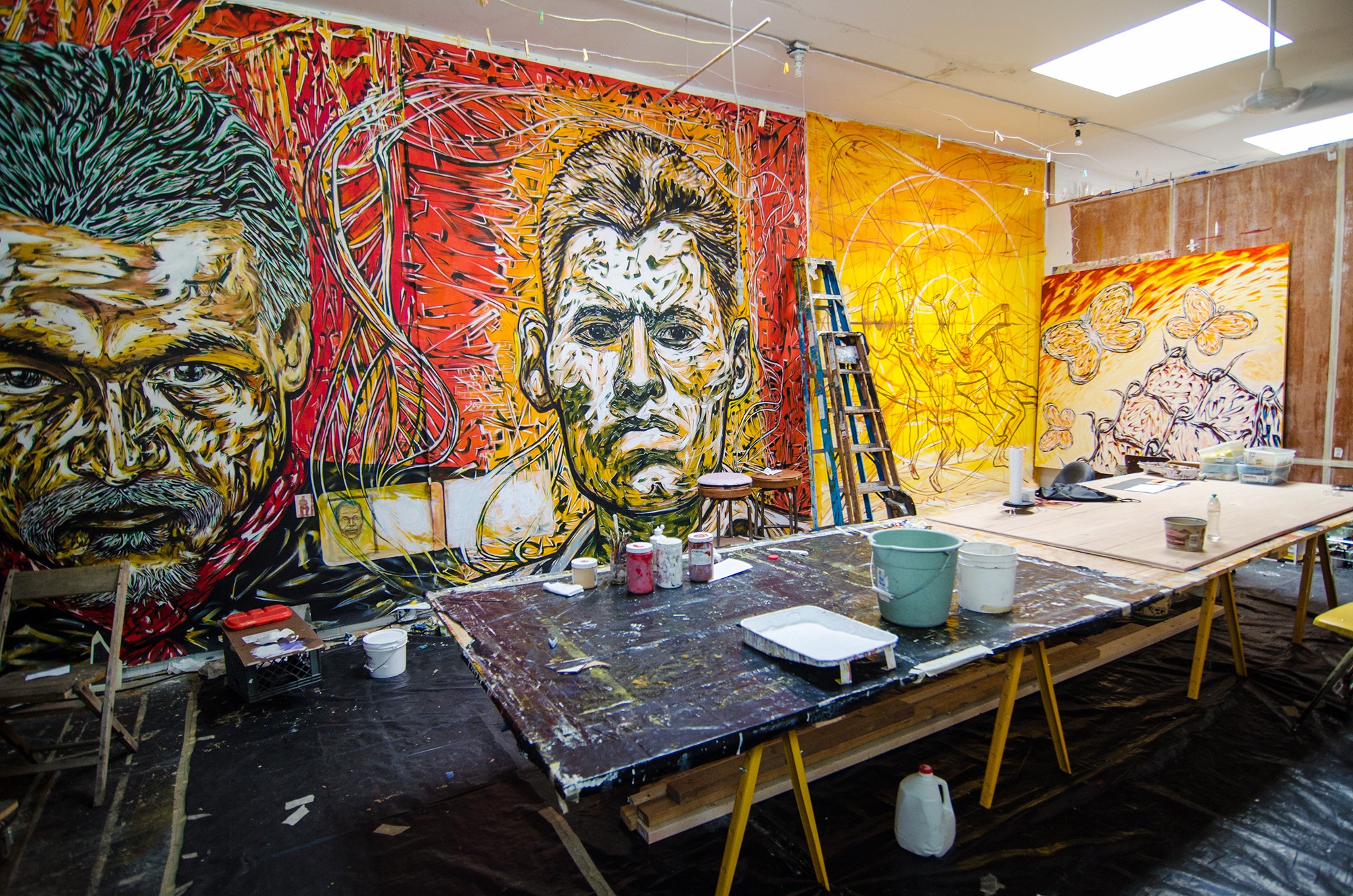 “Gulliver in Wonderland” is one of over fifty murals that Hector Duarte has painted around Chicago since immigrating to the United States from Mexico in 1985. Duarte studied mural painting at David Alfaro Siqueiros’ workshop and adheres to the Mexican Mural tradition and the U.S.’ Barrio Mural Movement but is also committed to innovating. “Gulliver in Wonderland,” which Duarte began in 1999 and finished in 2005, is acrylic on aluminum siding and nearly 3,500 sq. ft. Duarte’s murals, including “Gulliver in Wonderland,” tend to utilize bright colors and symbols representative of Latinx life in the U.S.

“Gulliver in Wonderland” is largely a depiction of the immigrant assimilation process and the difficulty of integrating into U.S. culture. Its main focus is a migrant worker floating in a red space, which Duarte has said represents the physical and metaphorical borderlands Mexican immigrants and Chicanos experience. We can see the barbed wire tying the worker down as representative of the literal division between the U.S. and Mexico and the cultural division between immigrants and non-immigrants. It can also be viewed on a smaller scale, as a portrayal of the exclusivity of Pilsen’s gentrification. The comparison of the immigrant to Gulliver suggests the immigrant is an outsider, as Gulliver was a traveler in a foreign land. Further, the inclusion of “Wonderland” in the mural’s title alludes to the American Dream and its false promise, as does the midwestern-style house behind the immigrant.

Beyond commenting on immigration and assimilation, the mural is also a representation of the oppression Latinx people face from non-Latinx people in the U.S. The prominent lines on the immigrant’s foot look like a barcode, which suggests a reduction of his identity upon arrival in the U.S. to labor. Another reference to the use of Latinx immigrants for labor is the worker’s baseball cap, which Duarte says is reminiscent of the Bracero Program. By suggesting a modern-day continuation of the Bracero Program, Duarte is implying that Latinx immigrants are still under the strict control of American bosses and have little freedom. There is also a white, Dia de Los Muertos mask covering the immigrant’s face. This mask represents the anonymity of immigrants and the pressures against them to not speak out, although it also shows that the immigrant still has ties to his Mexican culture.

Because the mural is so huge, it has the effect of dwarfing those who see it and making passersby seem trivial and small. Duarte says that by passing the mural, its audience is adding to the problem of not helping the immigrant. The mural asks us, “How can we help immigrants assimilate?” Duarte has adopted Siquerios’ idea of “polyangular perspective” in “Gulliver in Wonderland” (and much of his other work), a technique that takes into account a moving audience who is viewing the mural from different perspectives, making different pieces of the mural more visible depending on where the viewer is standing.

Being in a public place, “Gulliver in Wonderland” is accessible to all who wish to see it. Duarte has said he prefers murals over art that only those privileged enough to go to museums can enjoy. According to Duarte, the mural’s biggest audience is the Chicano youth of Pilsen, who mainly grew up there and who are not first-generation immigrants. The mural is meant to educate Chicano youth about their past. Duarte has also opened up his studio in the past to the public, answering questions about his art and showing them the work in his studio. In 2017, Duarte’s studio was a site for Open House Chicago, an annual event that opens up typically private sites in Chicago to the public. Close to 1,000 people visited.

“Gulliver in Wonderland” will remain viewable to all unless it is painted over. The mural will continue to serve as as a reminder of the division between immigrants and non-immigrants and of the general immigrant experience, but it has a changing context as Pilsen gentrifies. As housing exclusion in Pilsen grows, “Gulliver in Wonderland” may come to serve even more as a reminder of the background of the people gentrification is hurting.