The Lincoln Park McCormick Theological Seminary was founded on Fullerton Avenue in 1863 with the hopes that it would encourage future development of the surrounding community. Named after board member Cyrus McCormick, it was shortly thereafter moved to Hyde Park. The building has since been acquired by DePaul University, and serves as their School of Music. While not readily apparent, the former Stone-Academic Administration Building of the McCormick Theological Seminary is of major historical significance. In May of 1969, Puerto Rican Activists led by the Young Lords Organization commandeered this building for almost a week. These Latinx activists protested the impending gentrification of their neighborhood, and civil rights injustices that had been committed against Latinas and Latinos at the hands of the authorities. The Lords also put forth demands which included funding for low-income housing, and access to basic healthcare and legal services. These were eventually granted by the Seminary, if only temporarily.

This photo is from a Young Lords Rally in 1969. Photo taken by Hiram Maristany, and is part of the Collection of the Smithsonian National Museum of African American History and Culture. 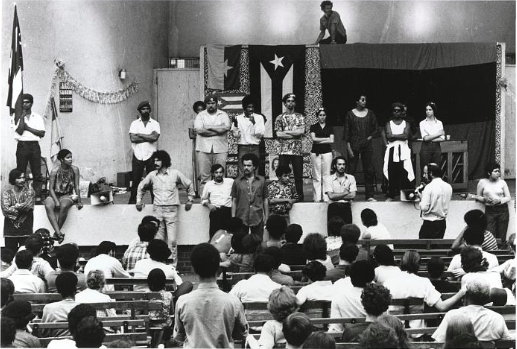 On October 30, 1970, the Young Lords marched to the United Nations. They carried the Puerto Rican flag, as the independence movement was one of the pillars of their organization. Photo taken by Jesse Steve Rose and available courtesy of Smithsonian 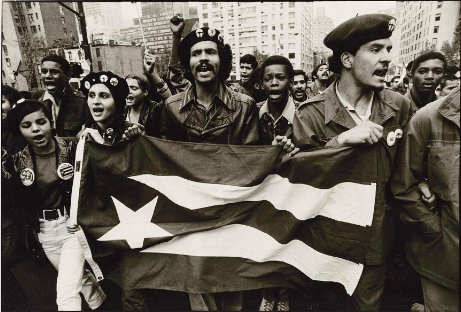 This poster, distributed around 1971, highlights the communal advancement initiatives that were integral components of the Young Lords' platform. Poster is available courtesy of the Smithsonian. 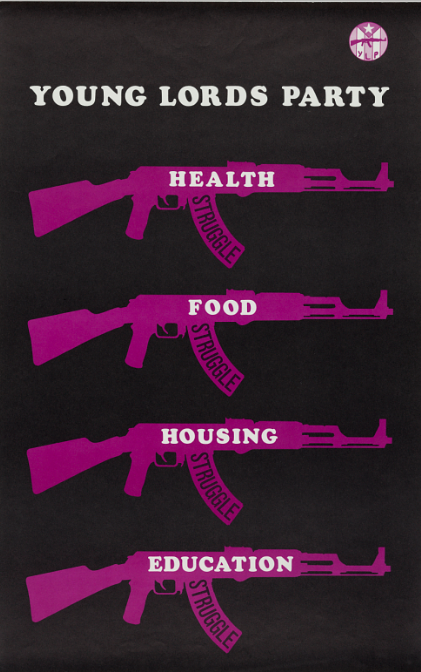 Cha-Cha Jimenez is pictured here in 1975 at a Young Lords Rally on the corner of Grace and Wilton. Photograph, courtesy of the Carlos Flores Collection, was featured in The DePaulia, (Vol. 97, Issue 26). 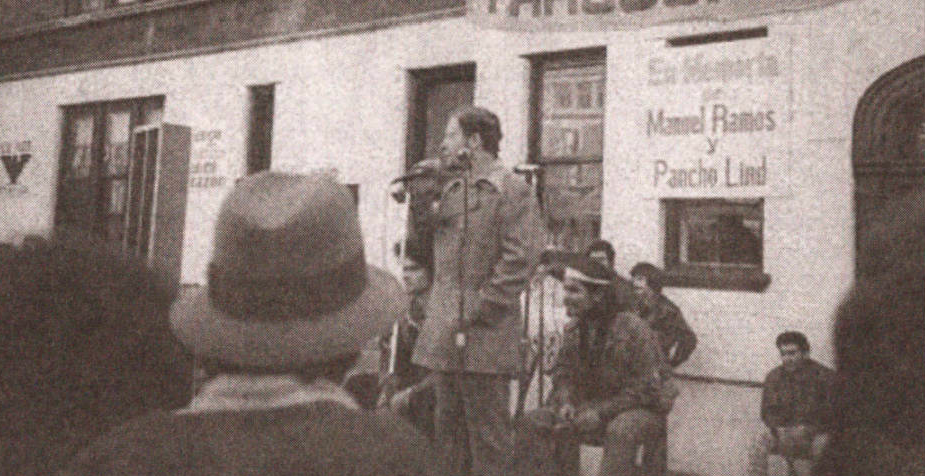 This photograph was taken at a joint press conference with the Young Lords and Black Panthers on the one year anniversary of Martin Luther King Jr.'s assassination. Photograph was featured in The DePaulia, (Vol. 97, Issue 26).

The McCormick Theological Seminary is pictured here. Photograph was featured in The DePaulia, (Vol. 97, Issue 26). 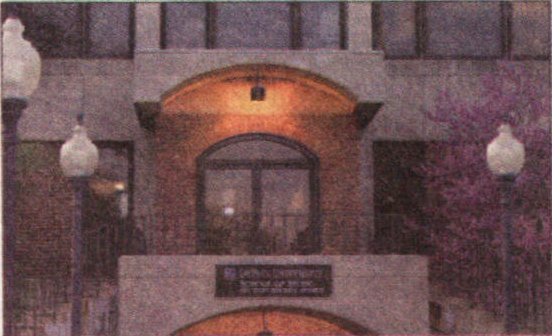 Cha-Cha Jimenez is quoted as saying: "Most of the day care centers in the city serve only the middle and upper income people who don't really need it." Photograph, taken by Carol Hotz, was featured in The Aletheia, (Vol. 3, Issue 2). 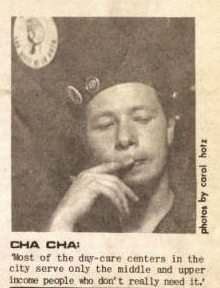 "Patría o muerte" once again emphasizes the importance of the Puerto Rican independence movement. Photograph, courtesy of Abramson, was featured in Ramparts Magazine in 1970 (Vol. 9 Issue 4). 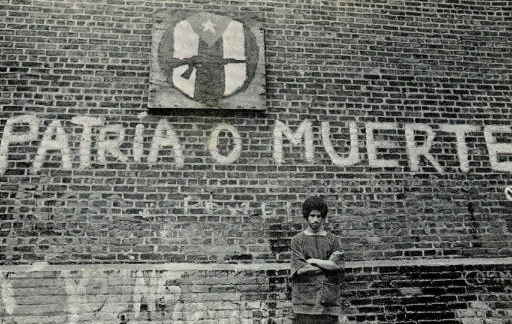 The Young Lords led several initiatives that resulted in increased healthcare for their communities. Photograph, courtesy of Abramson, was featured in Ramparts Magazine in 1970 (Vol. 9 Issue 4). 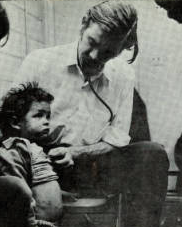 This photograph references the Young Lords' platform and call for a socialist and more equitable society. Photograph, courtesy of Abramson, was featured in Ramparts Magazine in 1970 (Vol. 9 Issue 4). 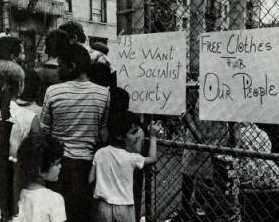 While 804 W. Belden Ave is often associated with the McCormick Theological Seminary, the Seminary itself was not founded here, nor does it currently reside at this address. The original Seminary was founded in Indiana in 1829. However, evolving American demographics and a donation by prominent philanthropist Cyrus McCormick drove the Seminary’s first change of location in 1863. The 25-acre plot for the Lincoln Park location was also a donation, made by the first mayor of Chicago, William B. Ogden, and three wealthy businessmen who wanted to stimulate community development. A little over a century later, in 1974, the Seminary decided to change locations once again, this time moving to Hyde Park. Just three years later, in 1977, DePaul University purchased the former Stone Building, and converted it into the DePaul School of Music, which is currently located on their East Campus. While the Seminary may no longer reside at this address, the consequences of its involvements and influence, especially with regards to the Young Lords, continue to be felt to this day.

The Young Lords Organization, now known for its powerful political activism, traces its origins to Chicago’s history of organized crime. Founded in 1959 by Orlando Davila and six other members, the Young Lords were a Puerto Rican gang, formed out of necessity, in response to white gang violence and the need to assert their dominance with regards to land and status. At this time, one member of the Young Lords, Jose (Cha-Cha) Jimenez, was in solitary confinement after reports surfaced that he and fellow gang-members had planned to try and escape jail, thus avoiding their sentences for drug-related crimes. While incarcerated, Jimenez passed the time by reading the works of Malcolm X and the Black Panthers, Martin Luther King Jr., and Thomas Merton. Inspired their messages, he served out his sentence and returned to the Young Lords with a plan to change the very foundations of the gang. Jimenez was elected president of the Young Lords in 1964, and he transformed the Young Lords from a group of criminals into the Young Lords Organization (YLO), a civil rights coalition that emphasized Latinx identity and ethnic pride.

Jimenez and the Young Lords grew cognizant of the fact that their problems were not with other street gangs, but with the systemic nature of the society that continued to oppress them and to deny them equal rights and citizenship. Drawing on inspiration from the Black Panther Party, the Young Lords thus organized and defended their communities by whatever means necessary. According to journalist Ortega-Aponte, this perceived militancy was often challenged, but the Lords were cognizant of the fact that

"the power of the ballot gained by people of color did not upend the use of the bullet against the marginalized communities.”

Further drawing from the Panthers, the Lords devised a twelve-point program. This document outlined their core beliefs, including the Puerto-Rican right to independence, socialism, and equality of education. They then implemented these principles in order to better their communities. In June 1969, while wearing Nationalist uniforms, the Young Lords led 10,000 people in the Puerto Rican Parade to honor the fallen Don Pedro Albizu Campos, the former leader of Puerto Rico’s Nationalist party. This was Chicago’s first march to protest Puerto Rico’s lack of autonomy. The Young Lords also affected positive change closer to home. They set up day cares for working mothers, health clinics, a “People’s Park” and breakfast programs, which were supported through the donations of local businesses. They also held history, political education, and martial arts classes, in addition to other programs aimed at educating members about their culture’s role in American history. These endeavors were all funded through donations, button sales, and revenues from their newspaper, the YLO. This monthly, bilingual newspaper highlighted pressing issues in order to educate their communities on current affairs.

In order to accomplish these daunting tasks, the Young Lords decided to take radical action. Around midnight on May 15, 1969, the Young Lords led 20 people into the Stone Academic-Administration Building of the McCormick Theological Seminary. After entering the building, they forced any administrators who had been working late out of the building, barricaded the doors, and chained them shut. They then hung a banner announcing the building’s name change to the “Manuel Ramos Memorial Building,” and utilized walkie-talkies to finish securing the building. Ramos was a former member of the Young Lords who’d been fatally shot by law-enforcement less than two weeks prior. Once set up, the Lords made their demands. They insisted on $601,000 for low-income housing, a health clinic, legal services office, and cultural center for the Latinx community. They also publicly shamed the seminary for their complicity in the displacement of their community, because they believed that the seminary had failed to teach their students how to aid with the basic needs of the community that surrounded them. The school’s president, Dr. Arthur McKay, reminded the Lords that the seminary had already decided to allocate 30% of its endowment to community development and threatened to call the police. However, according to historian Judson Jeffries, Cha-Cha responded in a press conference by saying that they would not backdown because they

“made it clear that no warrant to leave, no piece of paper was going to evict” them.

This stand-off lasted almost a week, and classes were suspended for four days while the two parties tried to reach an agreement. This period of tension finally ended with a phone call confirming that the money requested by the Lords would be paid in full for Lincoln Park low-income housing. Later negotiations also resulted in the Board agreeing to pay $25,000 to help create a healthcare clinic, make their finances public, make its facilities more open to the community, and to become a public opponent of the racist Urban Renewal plan.

The McCormick Seminary takeover was a small, yet integral component of the action that the Young Lords took on behalf of the Chicago Latina and Latino community. Their activism inspired others, leading to the development of branches all over the country, most notably in New York and Puerto Rico. They also became an integral component of the Rainbow Coalition, a multiracial activist group that focused on freeing the oppressed, working-class from the Daley machine. Their political activism further crossed racial boundaries when they endorsed African American Harold Washington’s campaign for mayor. In fact, once Washington achieved this feat, Cha-Cha Jimenez had the honor of introducing him to a crowd of over 100,000 eager spectators in Humboldt park. Unfortunately, despite Jimenez’s claims that the Young Lord’s Organization is alive and well today, this group could not withstand the tests of time and constant adversity. One of their greatest allies, the Reverend of the church where the Young Lords set up their headquarters, and his wife, were found murdered just nine months after the Young Lords established this relationship. Furthermore, their endeavors were met with constant repression by the Mayor, the Judicial System, and the Chicago Police Department, who unfairly targeted the Young Lords' leaders. Trumped up charges consistently cost the Lords time, money, and resources. Even the government and FBI closely watched the Young Lords, especially as they continued to advocate for Puerto Rico’s independence. Furthermore, news outlets continued to publicly misrepresent the Lords by portraying the them as a group of radical criminals, which served to drive away sympathizers and potential recruits. This, in addition to infighting, over-zealous expansion, and a lack of internal discipline, led to the eventual decline of the Young Lords. While their name may no longer ring as familiar in American society, the impact that the Young Lords have left on Latina and Latino history, and American history as a whole, is undeniable. And as long as this community continues to be treated like second-class citizens, the impact of the Young Lords will similarly continue to be felt.

Cardoza, Kerry. "Once a street gang, then a political collective, the Young Lords celebrate 50 years with a symposium at DePaul." Chicago Reader(Chicago).

Fowkes, Tom. The School of Music and the Lincoln Park gang that tried to change the world. The DePaulia. May 24, 2013. Accessed May 26, 2019. https://depauliaonline.com/1783/focus/the-school-of-music-and-the-lincoln-park-gang-that-tried-to-change-the-world-2/.

Jeffries, Judson. "From Gang-Bangers to Urban Revolutionaries: The Young Lords of Chicago." Journal of the Illinois State Historical Society, vol. 96, no. 3, 288-304. Published Autumn 2003.

Korrol, Virginia Sanchez. History of Puerto Ricans In the US - Part Seven. Center For Puerto Rican Studies. . Accessed May 26, 2019. https://centropr.hunter.cuny.edu/education/story-us-puerto-ricans-part-seven.

The Origins of the Young Lords Organization. The Young Patriots & The Original Rainbow Coalition. . Accessed May 26, 2019. http://www.youngpatriots-rainbowcoalition.org/ylo-introduction.

Created by Alexandra Richards (Instructed by Emiliano Aguilar AND Geraldo Cadava, Northwestern University) on May 27th 2019, 12:53:11 am.