Louise “Ouizi” Chen was born and raised in Los Angeles to Shanghainese parents. Her colorful expansive floral murals can be seen in public spaces throughout the United States, from museums to public parks. Chen says of her art, “My 'Totem Pillars' are inspired by a work in which a boy talks about experiencing every age within himself up to his eleventh birthday, and how he wished to embody all the different emotions and physical reactions associated with them. He feels conflicted, because although language and social constructs ask him to be one particular way, he wishes to be a more whole version of himself, more than just eleven years old. The totem pillars are a celebration of the way cultures represent themselves in the language of ornament, with design inspired by many different cultures spanning the world," (Chen).

The mural located on the pillars of a highway overpass. 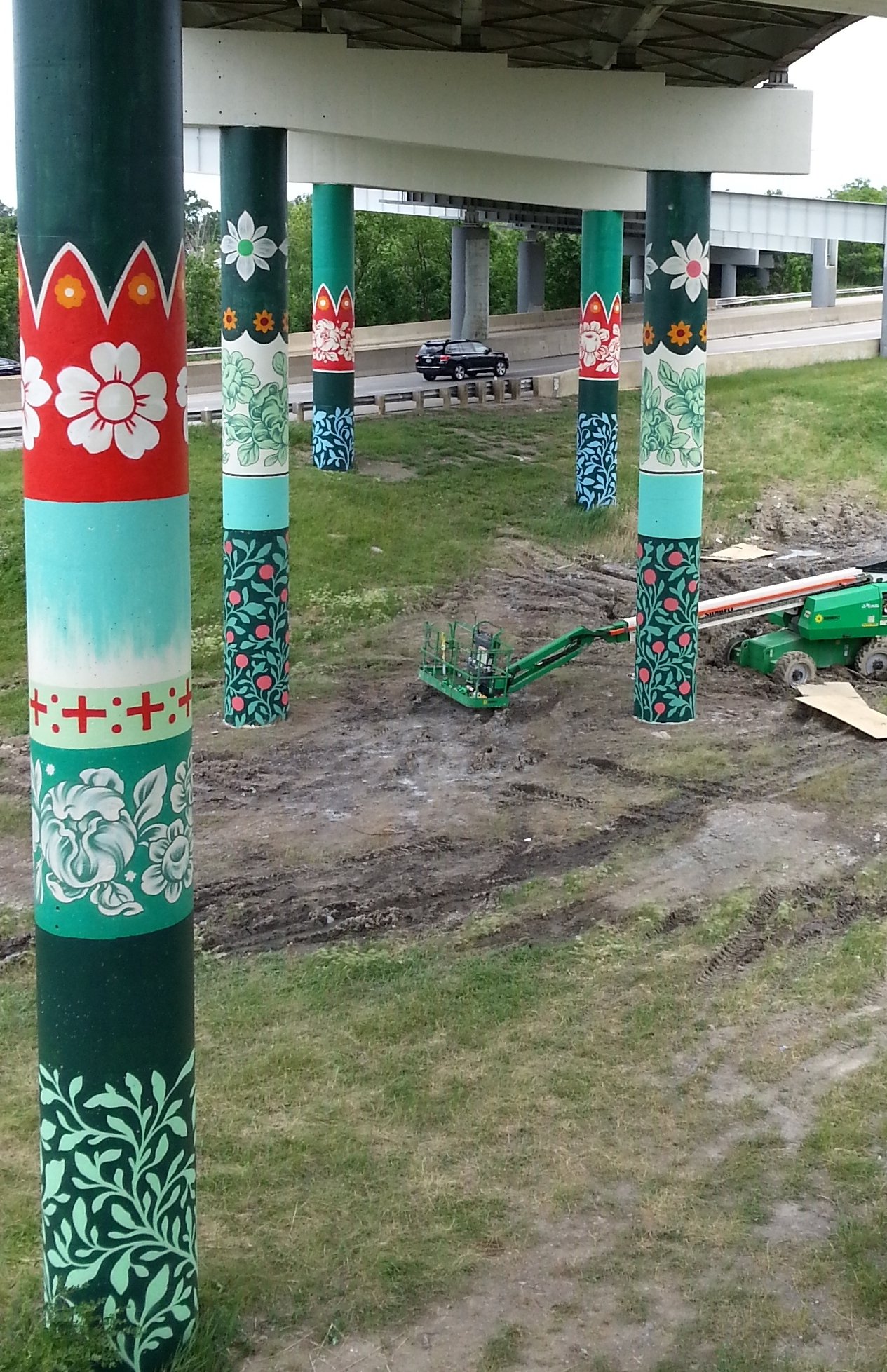 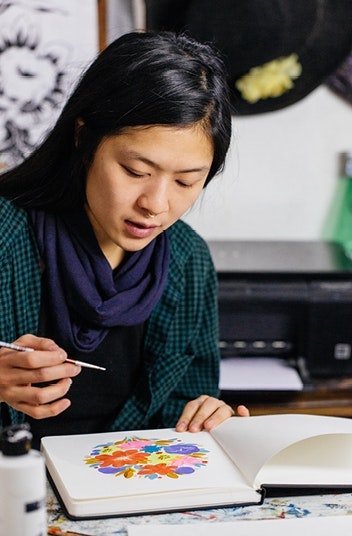 With the impending Republican National Convention of 2016, ways were sought to beautify Cleveland. With many people expected to take the Rapid Transit system to their destination from the airport, the idea was proposed to beautify the route along which the RTA follows.  The idea was presented to connect the murals to Cleveland in some way, to encourage a more local and personal feeling.  It was decided that the best way to accomplish this was to connect the murals to the winners of the Anisfield-Wolf Book Awards, which have been happening in Cleveland since 1935 and were founded by Edith Anisfield-Wolf in honor of her father and husband.  Multiple artists were given these books as their prompts for their work, and over the course of two weeks in June of 2016, the murals all went up in locations along the RTA Red Line.

Located in the historic rust-belt city of Cleveland, Ohio, this mural is strategically placed on the pillars of a highway overpass, turning a mass of concrete into something of beauty.  Artist Louise Chen explains, "Drawing from original imagery, but with no license to do so other than artistic, this totem formation represents a defiant act of being and feeling like everything all at once. This overload of ornament transforms the pillars into architectural objects fit for a palace or temple. In the environmental context that suggests entry or passage (freeway overpass and nature hike), the pillars become a shrine, an invitation to the public to enter an experience of belonging anywhere and being anyone,” (Chen).

Chen’s piece varies from her usual style of free-form flowers winding around the architecture to a more geometric design mixed with her flowers.  The unique shape of the pillars more than likely played a part in this, but the idea of the story may have also been involved.  Chen was chosen as the artist to connect with Cisneros' work due to their similarities in the usage of vibrant "colors": in Chen's case literally, and in Cisneros' case, figuratively.  Without asking Chen directly it is impossible to know how exactly she connected the story to her work, but aspects can be interpreted by the casual viewer.  With the layers of the pillars, and the fact that they are supporting the bridge on top of them, it could be posited that the layers of pillars are representative of the ten previous years of life, with the bridge on top of them all being the seemingly oppressive eleventh year.