During the harsh winter of 1777-1778, General George Washington made camp in the closest, and safest area, he could find for the Continental Army after fighting many intense battles with the British. Valley Forge serves as a turning point in the war as it would test the men who serve with everything they could handle and more. The National Memorial Arch was planned for construction in 1907 as a memorial for Washington and his men. 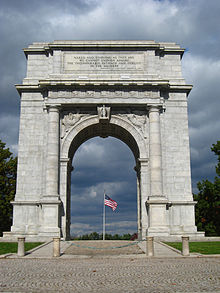 When the Continental Army was suffering from many rough battles with the British army, George Washington made Valley Forge his spot to set up camp for the winter. The winter of 1777-1778 would be a fight that Washington would have to fight on top of the one he was currently engaged in. The men in Valley Forge had only quickly made huts to use as shelter, but, as they would find out, didn't keep the cold out and made them face the winter's harsh temperature. If the buildings weren't bad enough, Washington's men didn't have the supplies they needed to make it through the winter. Men barely had clothes to wear for the winter and many found themselves freezing during the winter months. Food was also hard to come by as they became so desperate that they would eat anything just to fill their stomachs. Some reports even say that men would try to cook the leather in their shoes just so they had something to eat. All of those conditions led to an increase in disease as men were getting sick and had to be so close together.
Eventually surviving the brutal winter, the troops would go on to get supplies from Congress and make Valley Forge a little easier on the soldiers. Valley Forge stands as one of the most important moments in the war with the British because it was the toughest challenge that America had faced yet. The army was on the brink of collapsing, Washington's command was being questioned, and all hope seemed bleak at best, but the army came out the other side of this whole ordeal. Word of the French aid helped to promote morale and gave new life to the war for America.
Fast forward 130 years and a plan comes up to build a memorial to commemorate the struggle the soldiers had to endure for our freedom. Originally there was a design for two arches, one for Washington and one for von Steuben, but only the Washington arch would be constructed. The plan was to build two arches, one for both generals during the war, that would serve as the entrance for Valley Forge National Historical Park. While no one really had any complaints about the idea, a few saw the Romanesque Arch to be the wrong choice because it didn't really fit into rural setting like it did in urban ones.