Monument honoring "Honest John" Burke, North Dakota state legislator, governor, state supreme court justice, and secretary of the US treasury under President Woodrow Wilson. This is a second casting of the statue of Burke sculpted by Avard Fairbanks to represent North Dakota in the U.S. Capitol's Statuary Hall. 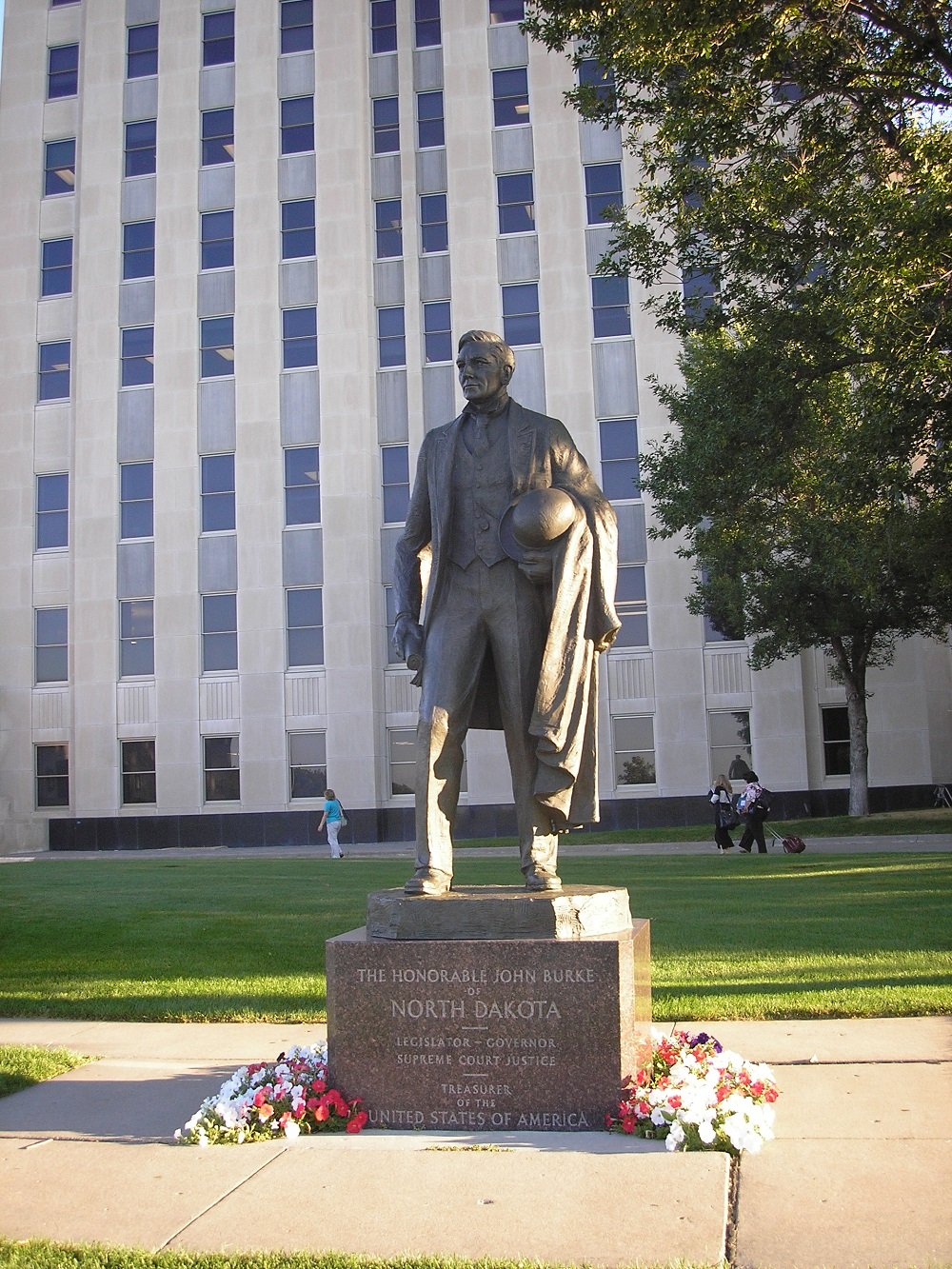 This statue was sculpted by Avard Fairbanks to commemorate John Burke, a Dakota Territory settler who became a prominent North Dakota political leader. Burke served in all three branches of North Dakota state government and as secretary of the federal treasury. Burke was chosen in 1959 to represent the state in the U.S. capitol's Statuary Hall.

John Burke (1859-1937) was born in Sigourney, Iowa. He migrated to Dakota Territory in 1888, where he initially worked as a harvest hand, taught school, and published a newspaper. He soon became a successful lawyer, serving as a judge and state's attorney in Rolette County.

Burke was a progressive political reformer and member of the Democratic Party who challenged the power of the railroads and of Alexander McKenzie's political machine. He was known for his personal integrity. This was reflected in his nickname, "Honest John." Burke served in both houses of the newly created North Dakota state legislature: the House of Representatives in 1891, and state Senate from 1893-1895. He later served as governor of North Dakota from 1907-1913. He was appointed treasurer of the United States by President Woodrow Wilson, serving from 1913-1921. He then returned to North Dakota and was elected a state Supreme Court justice, serving as chief justice from 1929-1931 and 1935-1937.

In 1959, the state legislature established a commission to select a person to represent North Dakota in Statuary Hall at the U.S. Capitol in Washington, D.C. Governor John Davis charged the commission to select a person "who is illustrious for historic renown or for distinguished civic or military service" and for "popular acclaim as a hero of his generation."1 State auto club director James Connally actively campaigned for the selection of Native American leader Four Bears. But the commission instead selected white settler-turned-politician John Burke for his personal integrity and long service to the state.

This sculpture is a duplicate of the $26,000 bronze statue sculpted by Utah artist Avard Fairbanks for Statuary Hall. John Burke's son Thomas Burke modeled for the statue. Fairbanks also sculpted the Pioneer Family monument on the state capitol lawn. These works so impressed University of North Dakota (UND) president George Starcher that Starcher invited Fairbanks to serve as a Special Consultant in Fine Arts and Residential Sculptor at UND from 1965 to 1967.

The original plan was for Fairbanks' statue to be displayed at the state capitol prior to shipping it to Washington, D.C. for installation in the U.S. capitol. However, the state commission discovered that a second bronze casting could be made from the same mold for roughly the same cost as shipping the original to North Dakota en route to the nation's capital. The first casting was sent to Washington, and the second came to Bismarck.2