Play this audio when you are standing in the "Neck" area!

Embedded into the sidewalk is this small historical marker which describes an important part of the city's African American history. McCoy Park, which is across the street, was once a segregated and mostly African American neighborhood called "The Neck" that was razed in the 1960s so it could become the park. The marker is part of the Truman Historic Walking Tour.

Listen to the audio above to learn more about Truman's stances on racial equality!

The marker is embedded in the sidewalk located at a high spot overlooking McCoy Park. 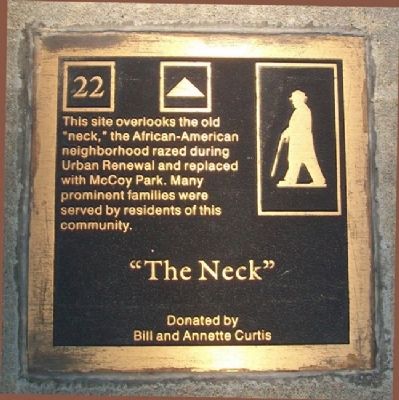 African Americans contributed significantly to the city's early development, beginning in 1826 when Jackson County was founded. Independence became the starting point of the Santa Fe Trail, which was one of the main trails that lead settlers to the West. Many people, including slaveholders and free blacks, came to Independence to supply these settlers with supplies and other provisions.

The African American community grew in the coming decades and established civic organizations, founded churches, and called for schools to be established. By 1900, the community was thriving and produced a number of notable residents including poet Melvin Tolson. However, the community began to struggle during the Great Depression and afterward as well. In the 1950s, the city grew worried about the neighborhood and decided to redevelop it, ultimately concluding that it should become a park in the 1960s. Not surprisingly, residents strongly opposed the plan. Despite their efforts, the plan moved forward and the park was created as part a larger urban renewal effort undertaken by the city.