Restored World War II Ready Ammunition bunker that houses many military artifacts from 1943. This bunker was gun battery No. 6, and was listed as the third in importance. The bunker has been restored and is now open for visitors certain times throughout the year and also by reservation. 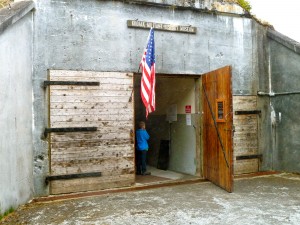 Inside the Bunker at the Kodiak Military Histroy Museum 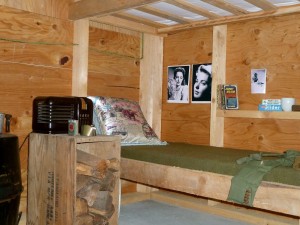 The Kodiak Military History Museum is located in a restored World War II Ready Ammunition bunker located at Miller Point in Fort Abercrombie. The Navy Seabees of CB-43 completed the construction of the building on December 30, 1943. The bunker itself was constructed using several feet of thick concrete and was covered with soil, moss, and grass in order to conceal it from above and to help protect and contain its original payload. The museum is surrounded by several abandoned 8-inch MKVI 3A2 Naval guns on M1 mounts as well as other abandoned bunkers, and parts of old artillery pieces that have been scattered some distance from their original position when the fort was abandoned by its original Army caretakers in 1948. These weapon systems had a range of 35,300 yards or 20 statute miles.

This installation was gun battery No. 6 and was rank third in importance behind number two in St. Peters Head, and Castle Bluffs battery coming in at number one according to the Harbor Defenses of Kodiak, 1944. The bunker stored 600 type AP projectiles that weighed in at about 260 pounds apiece. There was also 300 type HE projectiles that weighed about 240 pounds each. There was a rectangular room located in the center of the bunker and a “U” shaped corridor that wrapped around the sides of the bunker. The Power was stored in the center rectangular room and the warheads stored on shelves that surrounded the powder room. All the fuses were stored in a separate room and the bun battery was also equip with 40mm, .50 caliber, and .30 caliber machine guns along with ammunition that was stored in separate steel igloo magazines and concrete cottages.

The bunker has been restored to show what life was like for soldiers living in these bunkers during the time of World War II by the State Park Services. The site was excavated, waterproofed and then completely rebuilt with a new exterior which almost perfectly matched to the original look. Like the exterior, the interior was repainted to mimic the original look of the inside during World War II. Also, in recent years the interior doors were restored using doors that were salvaged from a similar bunker at Chiniak. Chiniak at St. Peters Head was an identical gun installation, all but their differences in the ready ammunition bunkers. The original building also had power, water, and working sewer, as well as a working drainage system that kept the underground facility from completely flooding.

Several displays allow you to dress in the attire of the soldiers living in the bunkers at that time. There are displays of old war jeeps, as well as old officer dress as well. These old uniforms are not only U.S. military uniforms but displays of Japanese uniforms as well. There are recreations of the barracks in the bunkers as well. This gives those who visit the museum a good look at how our military personnel lived in these bunkers buried underground or in mountainsides.