Completed in 1934 at the height of the Great Depression, North Dakota's state capitol departed dramatically from traditional dome-topped classical statehouses. Instead, it is a practical office tower.

North Dakota's first capitol was constructed in the 1880s, prior to statehood. Like many United States statehouses, the original plan called for a dome, rotunda, and flanking legislative wings. Budgetary limitations led to a scaled-down structure that was later added onto in a rather haphazard fashion. It burned to the ground on December 28, 1930.

Lawmakers imposed a $2,000,000 spending limit on the construction of a replacement statehouse. The traditional dome and rotunda statehouse style was designed to be imposing, but produced lots of unusable interior space. Instead of building yet another domed statehouse, North Dakota's Board of State Capitol Commissioners chose to build a modern seventeen-story office building to accommodate the state's growing bureaucracy. A shorter legislative wing stood to one side. A stylistically similar judicial wing was added on the opposite side in 1979-80.

In the early 1930s, a long tradition of North Dakota fiscal frugality collided with the realities of the Great Depression. The project's limited budget led to a simplified and highly functional design. Defenders pointed out that neighboring Minnesota's 1905 capitol featured only 29% usable space. In contrast, North Dakota's statehouse was 80% usable. It cost only $0.46/cubic foot.1 Skeptics called it "George Shafer's silo," and later "Langer's silo" after the two governors who served during its construction.2 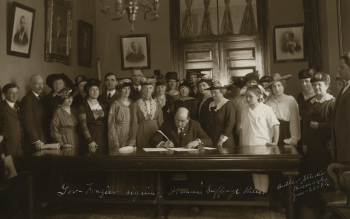 Prior to statehood, women earned the right to vote in school elections in 1883 and that continued after statehood in 1889. North Dakota was close to enfranchising women in 1893; a bill granting women suffrage passed both chambers of the state legislature, but the speaker of the House refused to sign it. Women hoped that the governor would still sign it into law, but the bill was “lost” on its way to his office. The House then expunged the record of mentions of the bill. Legislation about women’s suffrage continued to be introduced to the legislature, but the women’s suffrage movement in North Dakota was relatively quiet until 1912. With new support for the movement, suffragists finally saw a bill passed by the state legislature in 1913 but law was then defeated in a 1914 general election 40,209 to 49,348 votes. Another attempt in 1915 did not pass through the legislature. In 1917 North Dakota Women were granted limited suffrage: women could vote for presidential electors, county officials, some city officials, and township officers, but not for members of the state or national legislature. North Dakota ratified the 19th Amendment on December 1, 1919.