WBAP was founded by Amon G. Carter, Sr. in 1948 and became the first commercial television station in the state of Texas. The station is now located in the Meadowbrook neighborhood while the NBC 5 film library is digitally accessible thanks to the station's donation of three decades of film to the University of North Texas libraries. Amon Carter had previously established the Fort Worth Star-Telegram and decided that it was time for the Southwest to have its own station with original programming. The NBC-affiliate first went on the air to cover President Truman’s visit to Fort Worth on the campaign trail. the station continues to serve 60 counties between Texas and Oklahoma as NBC 5.

Will Rogers and Amon G. Carter, February 16, 1930. Fort Worth Star-Telegram Archive, University of Texas at Arlington. Courtesy of the Amon Carter Museum of American Art Archives. 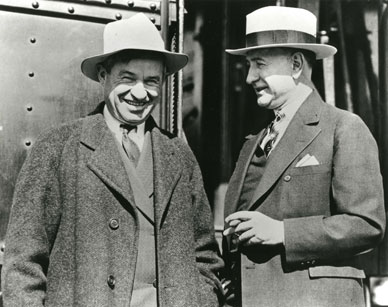 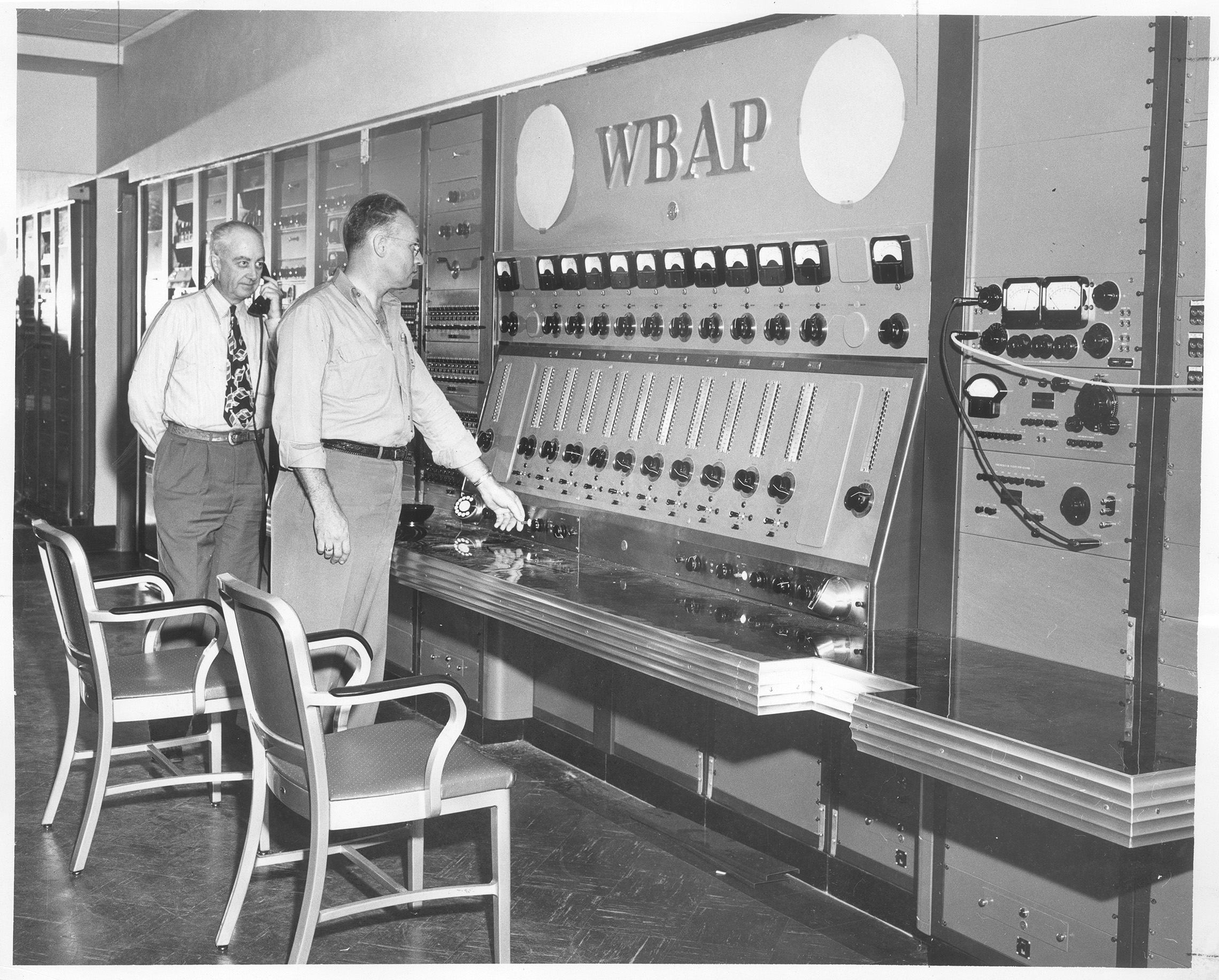 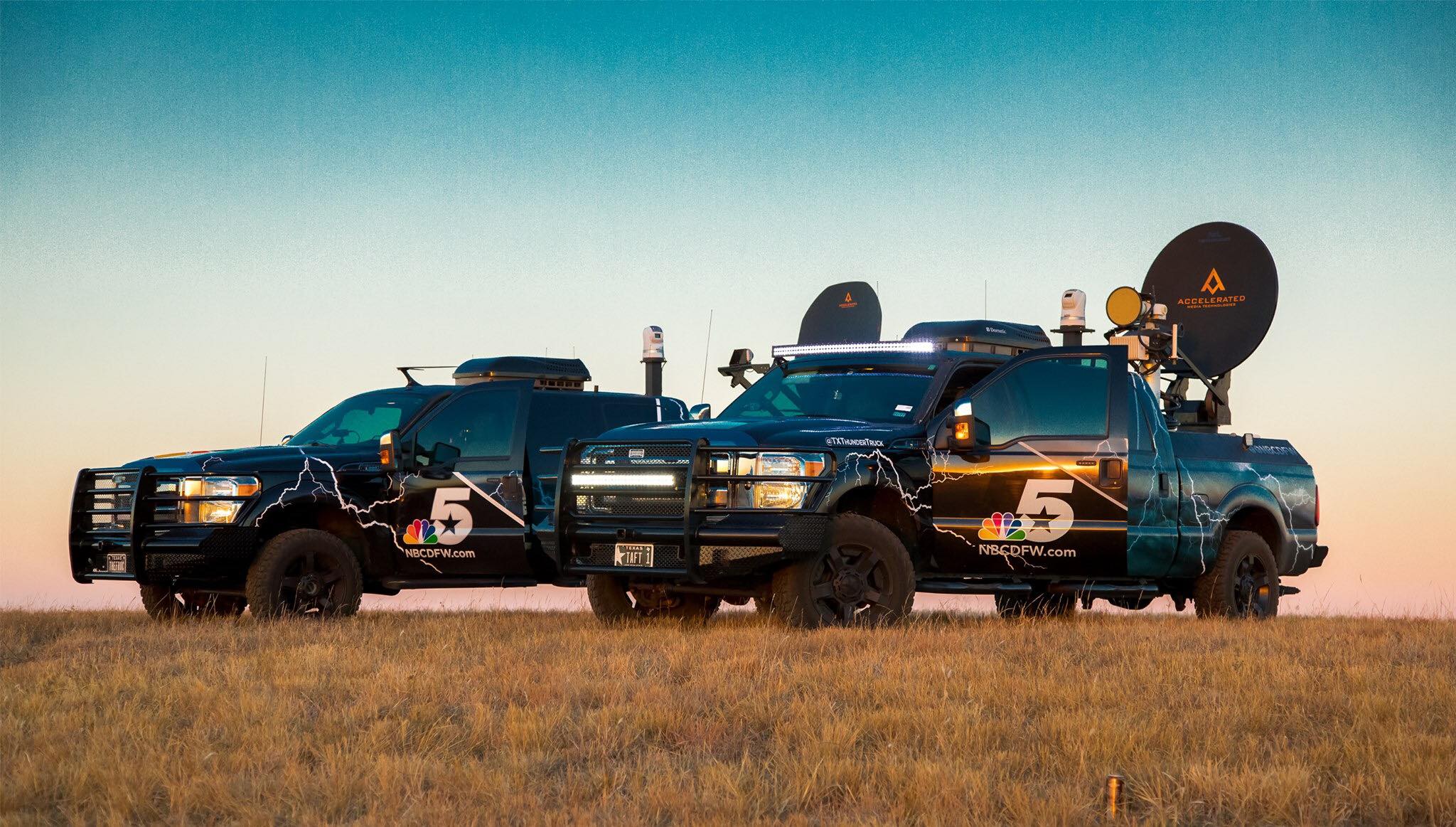 Shortly following the conclusion of World War II, Fort Worth Star-Telegram founder Amon G. Carter decided that he wanted to expand beyond newspaper and radio coverage. The Federal Communications Commission received his application for a construction permit and license on April 17, 1946. After two and a half years, the first WBAP-TV test signal was transmitted. At the time, WBAP was the first station in Texas, as well as the first station in the American Southwest.

The station planned to officially sign on the evening of September 29, 1948, but President Truman’s visit to the area on his whistle-stop campaign changed their plans. On September 27, WBAP-TV brought a 49-minute broadcast of the President to North Texas viewers. This unofficial beginning to the station’s broadcast life was followed by two days of dead air as the station prepared for their launch as originally scheduled. The first broadcast was a speech from Amon G. Carter followed by the station's first general manager Harold Hough. Also included in the inaugural broadcast was a dedication film from NBC, The Flying X Ranch Boys western variety show, and The Scarlet Pimpernel, a film with Leslie Howard and Merle Oberon. The evening concluded with the first local news broadcast in Texas and the Southwest.

The first reviews of the station were positive, with one Fort Worth Press reporter commenting “…television is here to stay.” The station started off strong and kept its momentum going, earning the Nation’s Best title for the Texas News from the Radio/Television News Director’s Association after its first year in operation. The station brought more historic firsts in broadcasting in its first weekend, such as football game broadcasts directly from the 50-yard line. Over the next six months, the schedule for the station almost tripled air time from 15 hours per week to 35-40 hours with seven-days-a-week programming. National programs from ABC and NBC were aired by the station in its early days with about a week’s delay from the original showing. Multiple local shows, including programs for kids, filled out more of the schedule.

An estimated 16,000 television sets populated the Dallas-Fort Worth area by the end of WBAP’s first year. The station set another milestone on October 31, 1949, with “Weather Telefacts with Harold Taft,” the Southwest’s first professional weather reporting program. January 1, 1953, brought the live telecast of the Cotton Bowl with NBC and WBAP with the Rose Bowl following. WBAP-TV developed a reputation for having great foresight. Way back in 1949, WBAP placed an order for RCA color television equipment, requesting it be delivered when ready. On April 9, 1954, this delivery made WBAP-TV the only Texas television station to broadcast in color from the NBC television network. About a month later, a three-hour studio color broadcast was staged, where the chairman of the board of Radio Corporation of America David Sarnoff and Amon Carter, Sr. threw the switch to initiate the first live local color telecast in Texas.

Over the following decades, WBAP continued setting precedents and winning awards as a television station. The first color tape recorder in Texas was installed in 1959. Sigma Delta Chi awarded the top national television news award and bronze medallion to WBAP in 1963 for its coverage of President Kennedy’s visit to Texas. 1966 saw another first when the station featured all-color news film. A major milestone in WBAP’s lifetime was in 1974 when the TV station and newspaper were separated, with the Star-Telegram being sold to Capital Cities Communications and WBAP going to LIN Broadcasting, becoming known as KXAS-TV. Despite this change, the station continued making history in 1977 with the first live intercontinental satellite report from London to DFW. As computer technology began rapidly improving, so did that of the station’s weather and internet services, becoming the first station to provide 24-hour local updates to a Local Weather Station and offering full online computer access.

Today, the station is known for its weather coverage that includes the Texas Thunder Truck (2015), an extended Ford F-250 Super Duty with groundbreaking technology that allows crews to chase and report weather live from anywhere, the S-Band Radar (2016), which is the most powerful TV radar in North Texas, and the state-of-the-art mobile Doppler Radar, Texas StormRanger, which was added to the station’s storm chasing fleet in 2017. A special broadcast on October 6, 2018, called “70 Years of Innovation,” celebrated the station’s impact on North Texas over its life.