"Benicia Capitol State Historic Park is a state park in Benicia, California. The park is dedicated to California's third capital building, where the California State Legislature convened from February 3, 1853 to February 24, 1854. It is the only pre-Sacramento capitol that survives. The park includes the Fischer-Hanlon House, an early Benicia building that was moved to the property and converted into a home in 1858, after the legislature departed. Benicia Capitol State Historic Park just off the city's main street also includes a carriage house, workers' quarters and sculptured gardens(1)."

Exterior of the Benicia Capitol Building 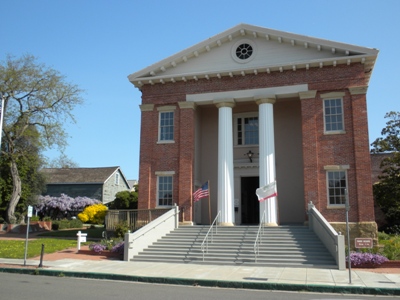 The interior columns seen in this photo are actually masts from salvaged ships from the Bay Area during the Gold Rush. The building has been refurbished with period decor. "CABeniciaCapitolSenateCh" by User:Leonard G - Self made

Before California was even an offical state, the first capitol was located in Monterey from 1775 to 1846. In 1849, San Jose became the seat of the first official state government for California.

According to the Benicia Capital State Historic Park brochure, “During San Jose’s 1849-1851 session, the building’s low ceilings, bad lighting and poor ventilation led the lawmakers to seek another location. Dubbed the ‘Legislature of a Thousand Drinks,’ for calls to close the session at the nearest saloon, this group was happy to accept General Mariano Vallejo’s offer to build a new capitol in Vallejo at no cost to them.” However, when they arrived, the building was far from complete and so the governing body moved to the recently constructed city hall in Benicia, a town named after Doña Francisca Benicia Carrillo de Vallejo, who was the wife of General Vallejo. Though multiple landmark laws were passed at the location, such as allowing women to own property independently from their husbands, the body only ruled there from 1853 to 1854. Benicia's "meager amenities," were the catalyst for the body's move in 1854 to the present-day capital in Sacramento (2).