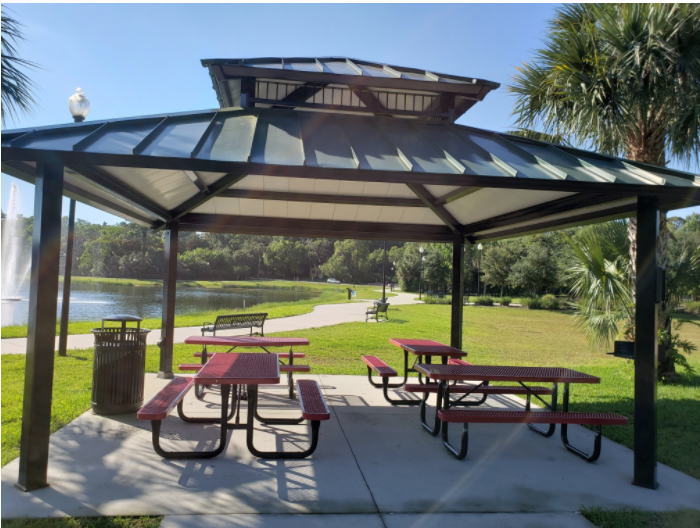 Orange City’s first map drawn by E.R. Trafford in 1877 identifies “Mill Site Lakes”, a cluster of three independent lakes, surrounded by a “Beautiful Drive”. One can imagine the beauty of the scenic lakeshore bounded on the east by Leavitt Avenue and on the west by the “Hotel Park” (see map). Beyond the business district of the bustling town and south of the growing white neighborhood, the land around Mill Lake was soon occupied by the town’s growing black population. Its rich soils encouraged economic independence for families by supporting produce farms.

A rare 1894 map of Orange City shows the former cluster of lakes as a single lake by the name “Lake Zulu”. The lake served as a community gathering place for generations. With several churches established around the lake shore, many of which are no longer standing, the lake was often used for baptismal ceremonies. It was a common place to find folks swimming, fishing and enjoying a pleasant scene around the beautiful lake.

In more recent years, Mill Lake began to display signs of degradation from various environmental inputs including surface water pollution from land development and agricultural pursuits. The Florida Department of Transportation piped storm-water runoff from Volusia Avenue to the lake when the highway was widened in the 1960s. This polluted runoff progressively contributed to the deterioration of the lake’s water quality and appearance. The additional water also caused disastrous flooding to the homes surrounding the lake during heavy rain events. To solve the flooding issues, a pipe was installed in 1986, allowing water from the lake to be pumped out to the St. Johns River whenever lake levels rose too high. It was about this time the State installed a chain link fence around the lake essentially closing Mill Lake off to community access.

Efforts by the City to restore the lake began in the late 1980s with the City’s first Parks and Recreation committee. Committee members Suzanne Brant, Wayne Wellmaker and Shoshana Resnick worked to design and fund a restoration project with walking paths and picnic areas. Unfortunately, the City met years of setbacks, and their plans were put on hold. In 1996, the City’s Leisure Services Department successfully reopened the area around the lake for fishing and with a walking path. However, impaired water quality and invasive plants continued to choke out the once pristine lake. In 2018, the city finally realized their dream to properly restore Mill Lake and the original park-like setting along its “Beautiful Drive”. The city added modern enhancements, including picnic pavilions, lights and a broad paved path along the shore line. Mill Lake continues to serve Orange City’s enduring black neighborhood while gaining the appreciation and affection of the greater Orange City community.