This location was once known as the Alumnae Gymnasium. It was the athletic facility that held the first women’s basketball game. This building is now the place that holds the college’s archives and is connected by a bridge to the Neilson Library.

This is Smith College students doing exercises in the Alumnae Gymnasium in 1904. https://libex.smith.edu/omeka/items/show/205. 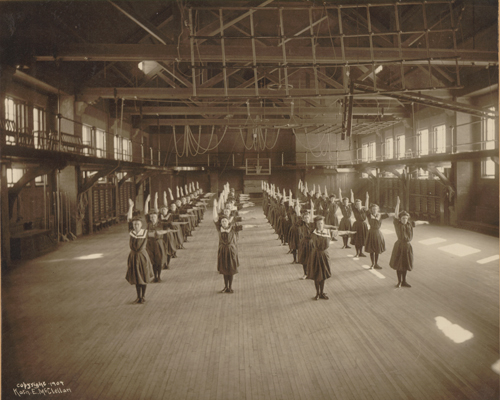 This is the Alumnae Gymnasium at Smith College in 1904. https://libex.smith.edu/omeka/items/show/177. 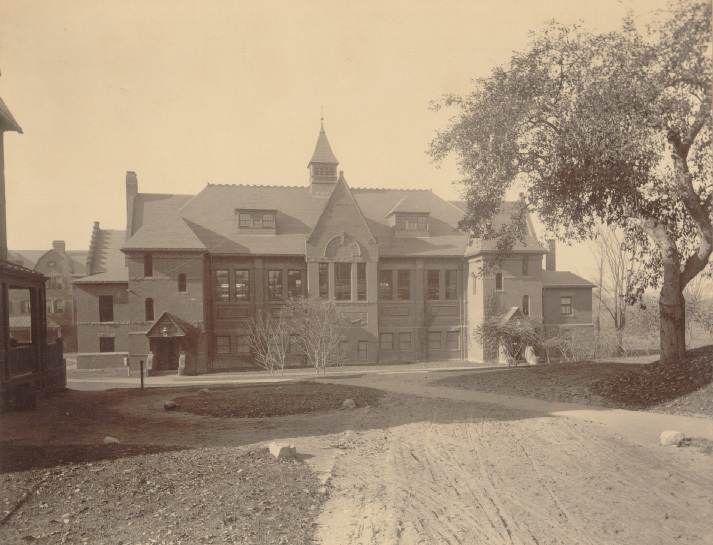 This is the Alumnae Gymnasium hosting a women's basketball game in 1901. http://print.positronicdesign.com/portfolio/portfolio-print-postcards-smith-college-athletics/ 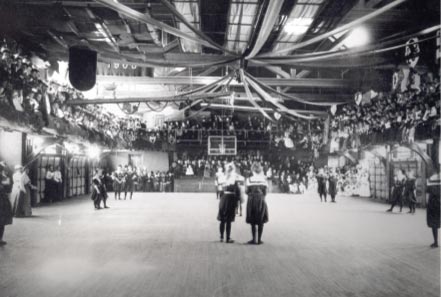 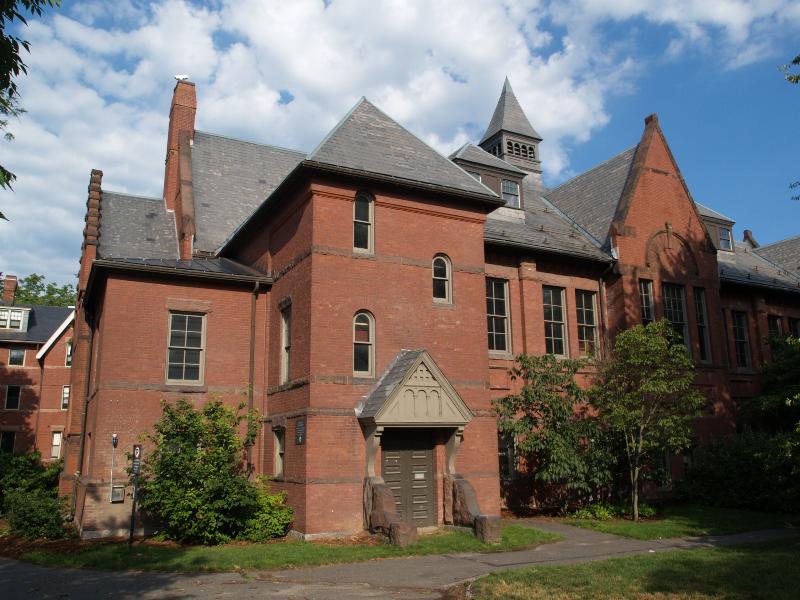 In 1871, Smith College, a liberal arts college in Northampton, Massachusetts was founded for women and was open in 1875. The founder, Sophia Smith inherited a large amount of money and wanted to use it towards making a school for the deaf since she had experience with loss of hearing. Her plan was later closed when John Clarke funded a school for the deaf before she was able to. She then passed away, but before she did, she made sure she put in her will to use the money she inherited towards a school that will provide education for women. When Smith College first started, there was only 14 students as the freshmen class. The population grew as more buildings on campus were made.

The Alumnae Gymnasium was opened in 1891. Out of all the other gyms for women, this one was the biggest and had the most equipment at the time. For their physical education, the women were required to have four classes of gymnastics that lasted an hour and a half every week. Before the Alumnae Gymnasium was built, in 1875 to 1879, classes were held in a section of one of the buildings, then eventually moved to a small wooden building. The making of Alumnae Gymnasium shined a light to the situation of physical education for women. The president of the college wanted to make sure the classes were being taught by a well-educated women teacher.

The hunt for Senda Berenson, only a two-year college student at Boston Normal School of Gymnastics, was requested to become the new physical education teacher at Smith College in 1892. Senda had a difficult time doing exercises and didn’t like gymnastics at all when she first started college. She also struggled and disliked her science courses because she had no interest in those subjects. However, after a few months, she had gotten a lot better. Her second year at Boston Normal School of Gymnastics, she was sent out to educate teachers about the theory and methods behind gymnastics. She realized how much of an impact she was capable of making and grew an urge to continue teaching in physical education. She was nervous to start instructing at Smith College, but after some guidance she was able to get into the routine of teaching. She noticed physical education wasn’t taken as serious as courses like English and History. Also, that the women’s interest was slowly being reduced for the limited amount of activities they were allowed to do. They weren’t allowed to do anything that involved physical contact or that had to do with teamwork and sportsmanship. Berenson didn’t like the lack of support and exploration these women were getting and wanted to find the best ways to teach these girls how to live a healthy lifestyle.

Berenson became comfortable in her position as the physical education instructor and wasn’t afraid to use her voice in the board meetings. She heard about the new invention of basketball and introduced it to Smith College. She believed girls should be able to play what the boys were playing. It started off as just making basketball apart of the class and having teams. In the class of 1895 and 1896, the first women’s basketball game was held in the Alumnae Gymnasium. From there, the game of basketball for women became known all over the country. The concern of basketball being too dangerous for girls was a complaint Berenson had to take into consideration. She solved this by being in control of making a new rule book for basketball that made it safer for women. Berenson became well known and appreciated for the desire to make a statement for the physical education of women. Till this day, Smith College athletes continue to make a name for themselves and portray the importance of what Senda Berenson wanted to do in the physical education for women.