Built in 1898, the Tucker County Courthouse in Parsons, West Virginia was built by P.O. Shrake. It was designed by architect Frank Piece Milburn. The jail and sheriff’s residence was built beside the courthouse in 1896 by William D. Bumgarner. It was designed by the Franzheim, Giesy, and Ferris architectural group from Wheeling, West Virginia. The jail no longer holds inmates, but it is used for county government offices. The courthouse still serves as Tucker County’s courthouse, and it was added to the National Register of Historic Places in 1984. 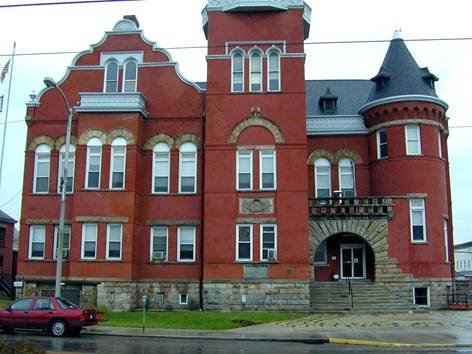 The courthouse was designed by architect Frank Piece Milburn. Milburn also designed the McDowell County and Berkeley County courthouses in West Virginia. The courthouse was built by P.O. Shrake in a late 19th-century design with exposed brick and stone. The structure has high-pitched roofs and tall windows. It was inspired by Victorian-era architecture.

At the time, many counties in West Virginia built separate residences from the courthouse for the sheriffs or jailors. Those structures would also contain the jail. The jail and sheriff residence was designed by the Franzheim, Giesy and Ferris architectural group from Wheeling, West Virginia. The jail and residence were built in 1896 by William D. Bumgarner. The structure was built in a Renaissance and Romanesque style of architecture due to the high windows and engraved decorations.

The courthouse was permanently placed in Parsons after a rivalry between the towns of St. George and Parsons. In 1856, St. George was chosen to be the county seat when Tucker County had formed from a section of Randolph County. Parsons’ population was growing due to its lumber industry. It was reported that in 1893, a group of residents from Parsons went to St. George and stole county records and all other important documents. Official business operated out of Parsons from then on.

The namesake of Parsons was Ward Parsons. He built the first home in Parsons and owned the most land. He was elected sheriff of Tucker County in 1876, and he was sheriff until 1881. He wanted the county seat to be moved to Parsons from St. George. He and other men petitioned for the courthouse to be moved to Parsons from St. George in February of 1889. The courthouse was officially built in 1898-1900, and Parsons became the permanent location of the Tucker County courthouse. The courthouse was added to the National Register of Historic Places in 1984.