This unique stone monument was created in remembrance of twenty-one individuals who were killed in a WW II U.S. Army plane crash that on July 1, 1942. This memorial is only a few miles the ravine where the first fatal plane crash in McDowell County occurred. Residents worked to provide support for the families of the soldiers and the monument was built through the efforts of the employees and management of Premier Pocahontas Collieries Coal Company.

This is an early photo that was taken of the Monument that was established by the Premier Pocahontas Collieries Coal Company. 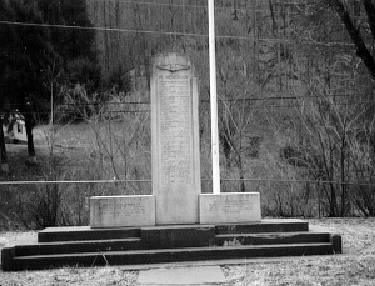 On July 1, 1942 at 12:05 pm, a former American Airlines plane that was converted to an Army transport plane was en route to Florence, South Carolina. The weather on this day was reported to have played a large role within the reasoning for the crash, with heavy rain and thick fog. Based on eyewitness reports, it is believed the pilot may have been lost because of the heavy fog.

In order for the pilot to collect his bearings given the circumstances of the weather, he lowered the plane's altitude and this caused him to hit the top of the mountain ridge. The impact caused approximately six feet of the right wing to shear off. The plane continued to fly until the wing and tail broke off which caused the plane to plummet into a ravine. The wreckage cut through trees and rolled down to the other side of the ravine where it came to rest. All twenty-one passengers who were on board perished and nothing but burning wreckage was found on the plane after the crash.

Several citizens in nearby Coalwood and Premier observed the plane just before the crash. Mrs. and Mr. Lawrence Runyon and their niece witnessed the fatal accident from their back porch. Lawrence Runyon and several other men from the community ran to the site in attempt to extinguish the flames, but all had been killed in the crash.

“I heard a kind of a roaring noise,” Mrs. Runyon said. “I looked up and saw a big airplane which appeared to be in trouble. The plane appeared to be in a nose-dive, then I saw what looked like a wing fall. The ship then plunged earthward.” 2

The nearby community of Welch arranged a special tribute service to pay homage to the soldiers. Hundreds of spectators gathered to mourn on July 5, 1942 at the Norfolk and Western Railway station. Flag draped caskets lined the station platform as Rev. Dorsey led the service. R. E. L. Douglas of McDowell American Legion Post No. 8 read each fallen soldier’s name, followed by a three shot salute and taps. The caskets then boarded trains to return the soldiers to their hometowns.

The management and employees of the Premier Pocahontas Collieries Coal Company erected the monument in remembrance of the twenty-one soldiers who died in the plane crash. The monument includes a list of all the names of the men who were on the flight. The location of the this monument is just off Route 52 also known as Coal Heritage Rd in Premier, approximately 500 feet from the Premier Methodist Church.