Constructed in 1875, this Italianate-style courthouse is one of the oldest public buildings in central California and was designed by Albert A Bennet, the architect who also designed California's state Capitol. The building was expanded in 1913 and has been well-preserved and is now home to the Merced County Courthouse Museum. The museum is maintained by the Merced County Historical Society and features exhibits such as the Superior Courtroom, Blacksmith shop, schoolhouse, and other, temporary exhibits. The building was placed on the National Register for Historic Places in 1975. 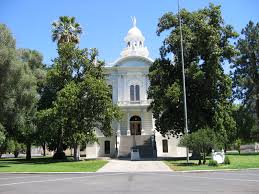 The Merced County Courthouse design was awarded to A. A. Bennett through a competition. When Bennett won, he was awarded 500 dollars plus 6% of the building cost. The construction was done by A.W. Burrell and Company for 55,970 dollars. The Italian Renaissance style in which the building was constructed was typical for public buildings before the 20th century. The building is three stories and 60 feet tall. It is modeled similarly to an Italian Palazzo. The building's roof features a cupola with a wooden statue of Minerva, the Roman goddess of Wisdom. An identical courthouse in Fresno, California, was also completed in 1875, and it is assumed that this was also constructed by Bennett due to their similarity, however, it was later demolished.