Completed in the midst of the Great Depression, the Baha'i House of Worship is the oldest and only one of the ten temples dedicated to the Baha'i faith. Plans to construct the temple began in 190s when a small group of Baha'is in the Chicagoland area came together and worked toward a plan to raise funds and construct the temple. After about 18 years of planning and fundraising, the first steps of construction began in 1921. By 1922, the first hall was completed but it would take another 21 years before the temple was finally finished and dedicated. Today the temple stands tall over Wilmette and can be seen from miles away on Lake Michigan.

Baha'i Temple in the evening 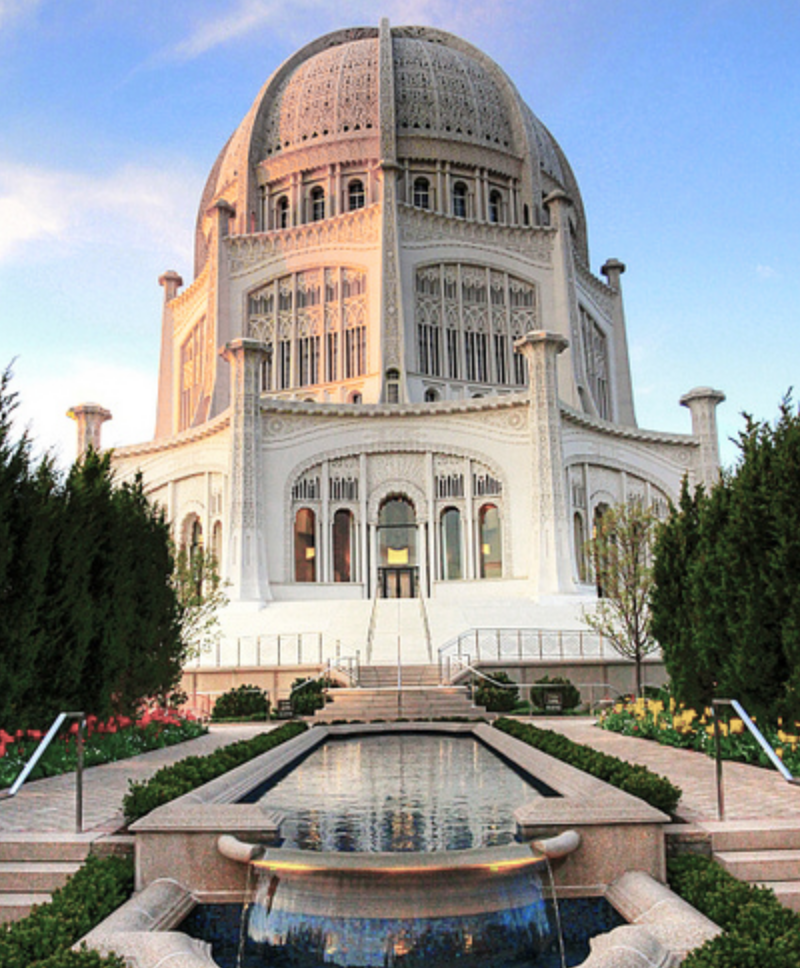 In mid-1903, a small group of Bahá'ís in the Chicago land area discussed the idea of a Bahá'í House of Worship in the area. During the time, the world's first House of Worship was being built in Turkmenistan. A Bahá'í woman from Chicago named Corinne Knight True went and visited Palestine in 1907 to visit `Abdu'l-Bahá, then leader of the religion. Corinne told `Abdu'l-Bahá of the growing interest in a house of worship in Chicago. A series of newspaper articles in the fall of 1908 confirmed that the Bahá'ís would begin construction on their house of worship.

This led to the development of a national sense of community. `Abdu'l-Bahá gave his okay for the project. He recommended that the structure be built away from the Chicago business district, in a less populated area near Lake Michigan. The Bahá'ís considered building the temple in Chicago's Jackson Park or the suburb of Evanston. Eventually, they settled on Wilmette, Illinois, just north of Evanston. The location provides a beautiful landscape and the temples beautiful architecture can be seen for miles. Although the location was set for the project it would take many more years before anyone would see the temple built there.

By early 1922, Foundation Hall was basically finished, and Bahá'ís began to use it as a meeting place. Progress on construction soon began to stall as funds began to dwindle and residents of Wilmette began expressing displeasure with the construction site. At this point, many strange rumors about the structure began to circulate. People began to think the temple was for war purposes or it housed large animals. Not many knew what the future had in store for the temple and it took 8 more years before the construction would continue.

Construction began to resume as contributions from Bahá'ís and others began to increase, and in 1930, the George A. Fuller Company was assigned to complete the building's structure. The superstructure was completed in 1931, and just a year later, John Joseph Earley was hired to begin working on the building's concrete structure. The outside of the building was finished in January 1943. It was a long and hard-fought journey to finish the temple but after more than 40 years of planning and hard work they ended up with a masterpiece.

Today the temple stands tall and beautiful over Lake Michigan. It is open every day from 6:00 AM to 10:00 PM for personal prayer even on holidays. There are choir services for the first three Sundays of every month and there are also devotional programs every day from 9:00 AM to 12:00 PM. The temple also provides tour group opportunities for groups 10+.