This small urban park is named in honor of the first telegraph office in Texas, which opened here in Marshall in 1854 and was operated by the Red River Telegraph Company. This telegraph office connected the city of Marshall to other telegraph offices in New Orleans and Alexandria, Louisiana, and Natchez, Mississippi. At the time, Marshall was the fourth largest town in the state due to its location on the new railroad through East Texas and the stagecoach service to Louisiana. The telegraph predated the telephone as a means of long-distance communication in the United States, and the growth of the new state of Texas was bolstered by this new invention. The park contains several historical markers that share the story of the Red River Telegraph company, which operated for nearly a century-and-a-half. 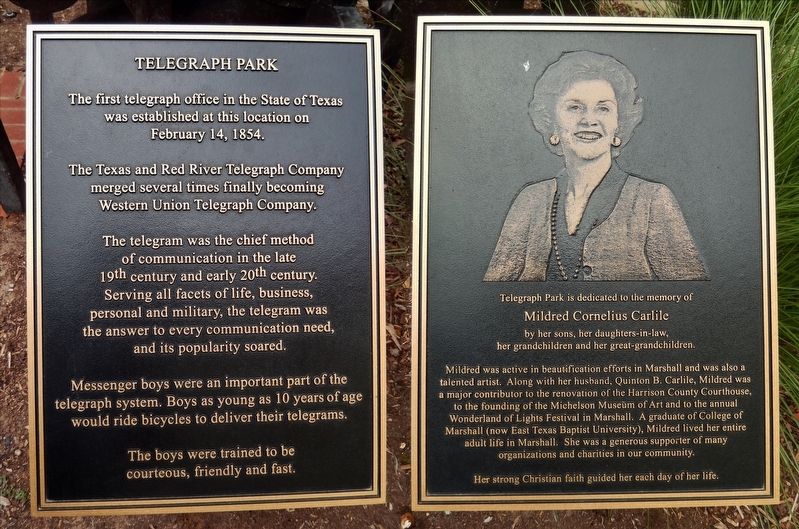 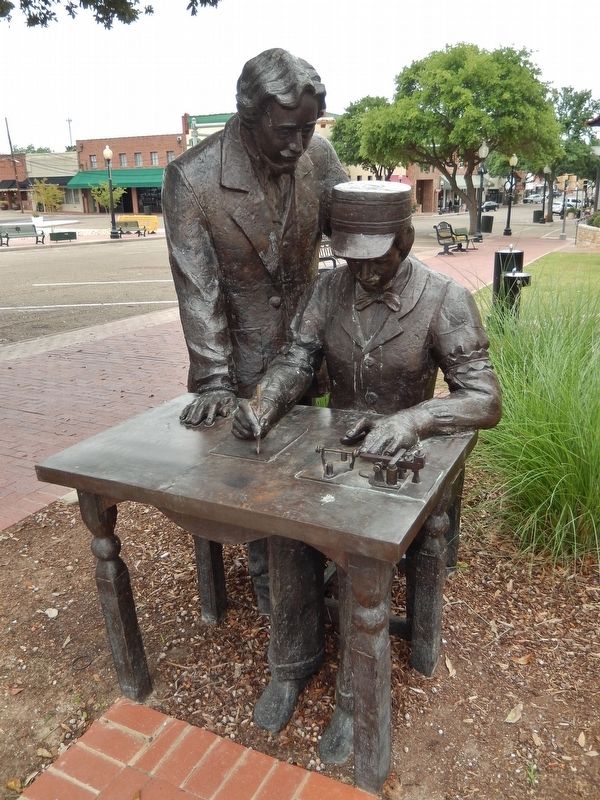 Telegraph communication began in Texas in 1854, following the chartering of the Texas and Red River Telegraph Company. The first office for this new company was opened a few weeks later in Marshall. The newly established communication line offered connections to New Orleans and Alexandria, Louisiana, and Natchez, Mississippi. In the next year, Houston and Galveston also became connected to the telegraph network.

The company used treetops to hold their wires along the routes, but often offices had to close down so workers could trace the route to repair wires that had broken due to the wind. The next company to operate in the region, Texas and New Orleans Telegraph Company, was chartered in 1856 and began construction to connect Galveston to San Antonio and Austin. Soon after, these first two telegraph companies consolidated.

In 1866 the Western Union Telegraph Company absorbed the American Telegraph Company. This company came to dominate the field with an estimated 1,500 miles of telegraph wire throughout the state by 1870 and owning 89 of the 105 telegraph offices in Texas by 1874. This expansion continued with the transcontinental railroad as more lines were completed along its route. A military telegraph line was completed in 1876, connecting San Antonio with other Army reservations. In 1885, the Galveston News became the first Texas newspaper to use the telegraph with a special leased wire between Dallas and Galveston. After merging with the Postal Telegraph and Cable Company in 1943, Western Union became the only company operating in Texas, employing over 2,800 people across 1,828 offices by 1949.

The Western Union merger made it one of the most modern telecommunications companies in the world, as well as the only telegraph company to operate in Texas after 1943. As communication technology rapidly advanced through the 1960s, Western Union quickly expanded across 10 Texas cities, eventually establishing a National Processing Center in Dallas that received and processed payroll and accounting data from offices around the nation. With this new center, the need for smaller offices diminished, and on February 9, 1972 the decision was made to close down the first telegraph office in Texas at Marshall.