The Cameron City Pool was built in 1940 as a PWA project. After a fire alerted city officials to a water reserve shortage, plans were made to build a pool that would provide another water supply in emergencies and serve as a recreation center for the city. Unique for its semi-circle shape and underwater lifeguard station, the pool remains a well-preserved example of a PWA project. The pool and bathhouse were added to the National Register of Historic Places in 1993.

Undated sketch of the pool 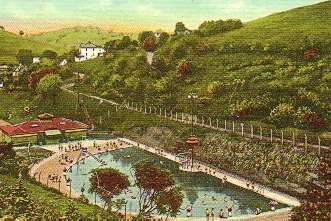 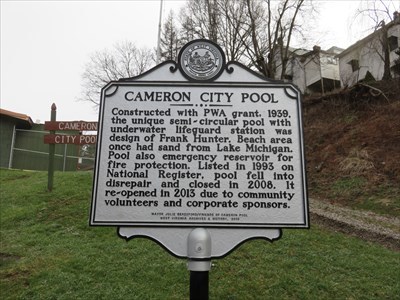 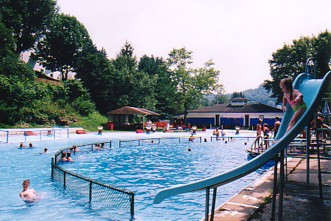 While drained and undergoing repairs, it is easy to see the underwater lifeguard station. 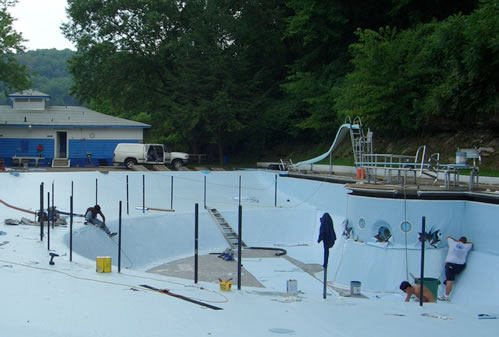 Built during the Great Depression, the Cameron City Pool has been operating since 1940. The pool has a unique semi-circle shape and an underwater lifeguard station. In 1939, a grant was given to the city from the Public Works Administration (PWA) to construct the pool and is labeled project number 1196. In addition to the pool, the property has a wooden bath house which was also built with the grant.

Though originally featuring high dives, the tallest diving boards were removed in 1992 as a safety precaution. Two lower diving boards remain. The underwater lifeguard station was positioned beneath the diving boards so that lifeguards could see into the water as swimmers dove. Damage to several portholes has made this room unusable until they are repaired. This lifeguard feature and the sloping design of the pool's floor illustrate the somewhat progressive aspects of the pool in regard to safety. In 2007, the community raised money to fund a new liner for the pool among other repairs.

The proposal for the pool was developed after a fire burned the G.C. Murphy store in 1938. An analysis of the fire revealed a lack of water supplies for emergency situations. The town determined that the creation of a pool would allow them to maintain another water supply and offer a new recreational center for residents. After being approved by the city, the town was awarded a PWA grant which helped to cover the costs. The city used a design by a prominent Indianapolis architect, Frank Hunter. This pool was the first to be constructed with this particular design by Hunter but would go on to be popular among his clients.

The PWA was created in 1933 when the National Industrial Recovery Act was passed. The goal of the program was to allocate funding for community projects that would both enhance the community's infrastructure and provide work for struggling citizens. The PWA projects were championed by President Franklin Roosevelt and especially by Eleanor Roosevelt. Both saw the PWA as a means of helping pull the country out of the economic crisis. Over $6 million dollars was spent by the PWA and the projects it funded still stand all across the country. The PWA was halted in 1941 as Roosevelt moved in a new direction and attempted to cut spending.

As one of many remnants of the work of the PWA, the Cameron City Pool has direct ties to the administration's legacy. The pool is also significant for its unusual design. For these reasons, it was added to the National Register of Historic Places in 1993.