This is a contributing entry for Watkins Museum of History and only appears as part of that tour.Learn More.

Bleeding Kansas Exhibit at the Watkins Museum of History

The Bleeding Kansas exhibit at the Watkins Museum of History remembers Quantrill’s Raid of Lawrence, Kansas and its significance in relation to the Civil War. The exhibit contains background information on the people and events preceding the raid, information regarding the places in Lawrence that were affected, and artifacts.

The current-day Watkins Museum of History. The home of Wesley and Elizabeth Duncan was located here during the raid in 1863. 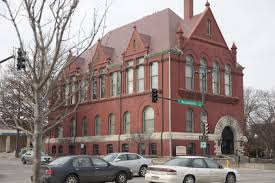 The center of the exhibit contains an interactive display that highlights some of the specific people and events involved with the raid, in addition to artifacts from various locations. 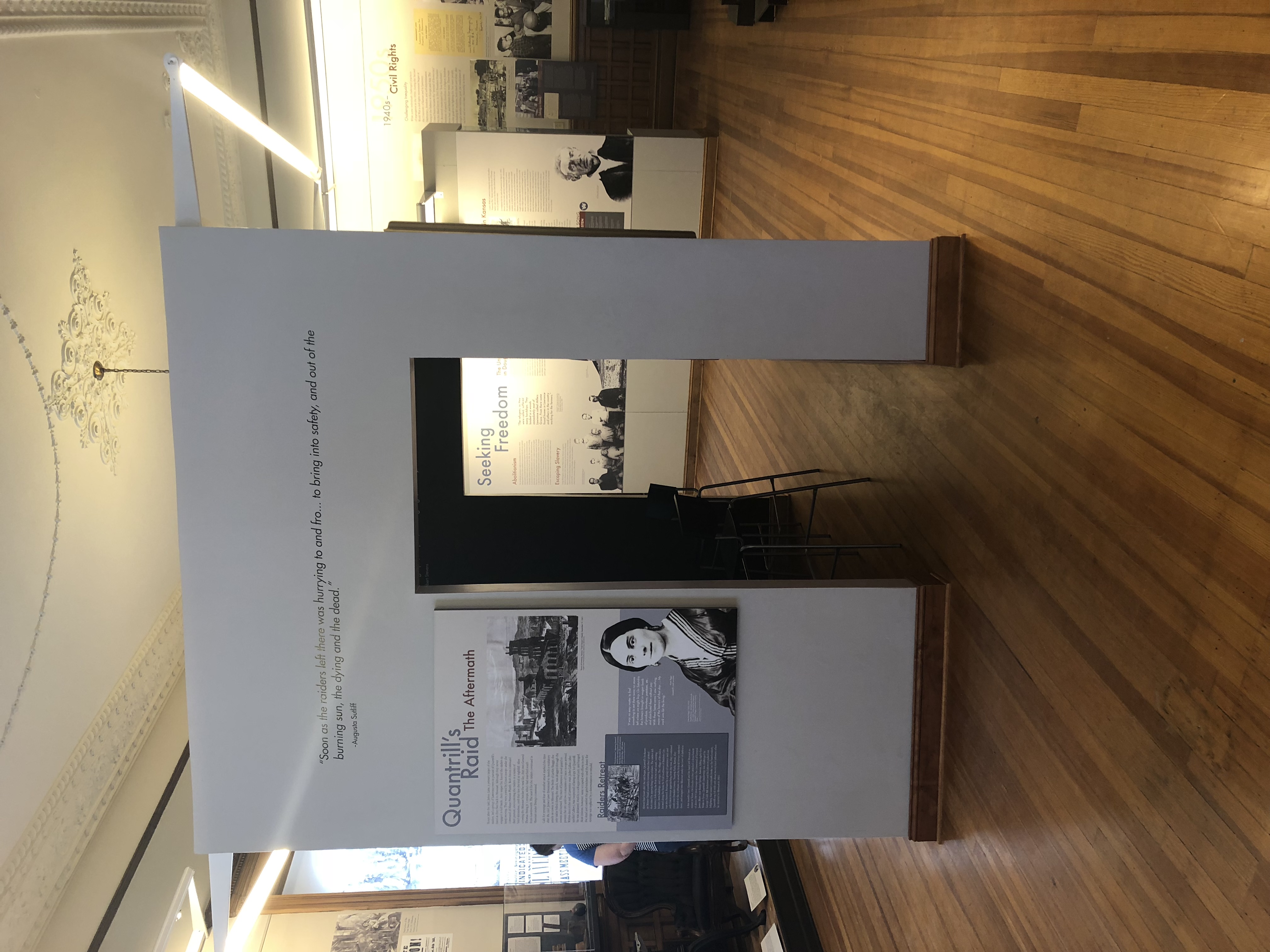 A bust of James Lang, one of the first U.S. senators from Kansas and a central figure in the events that led to Quantrill's Raid. 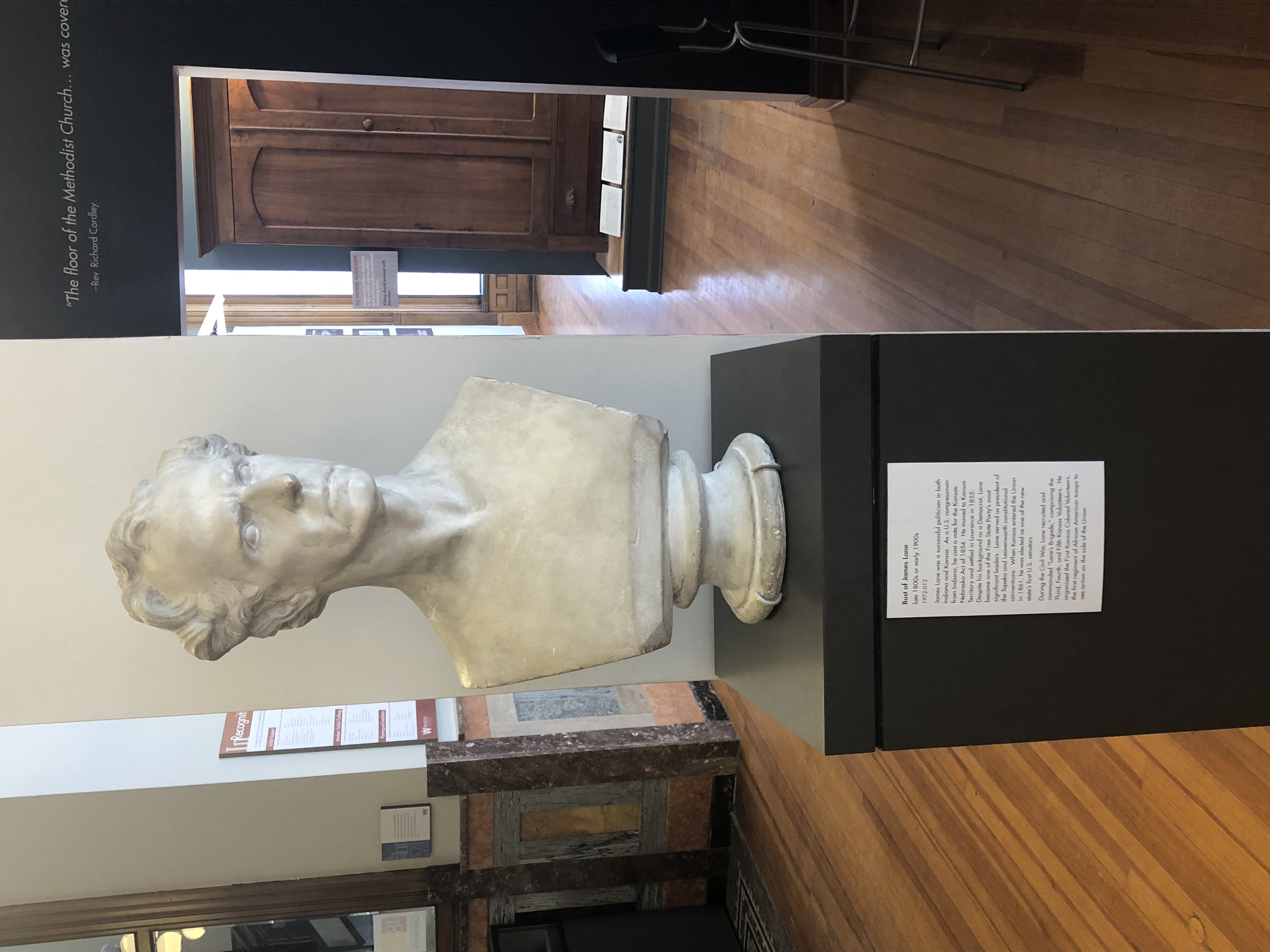 "Blood Stained Dawn" painted by Ernst Ulmer in 1991. The scene depicted is largely an imagination of the events, but the architectural details are historically accurate. 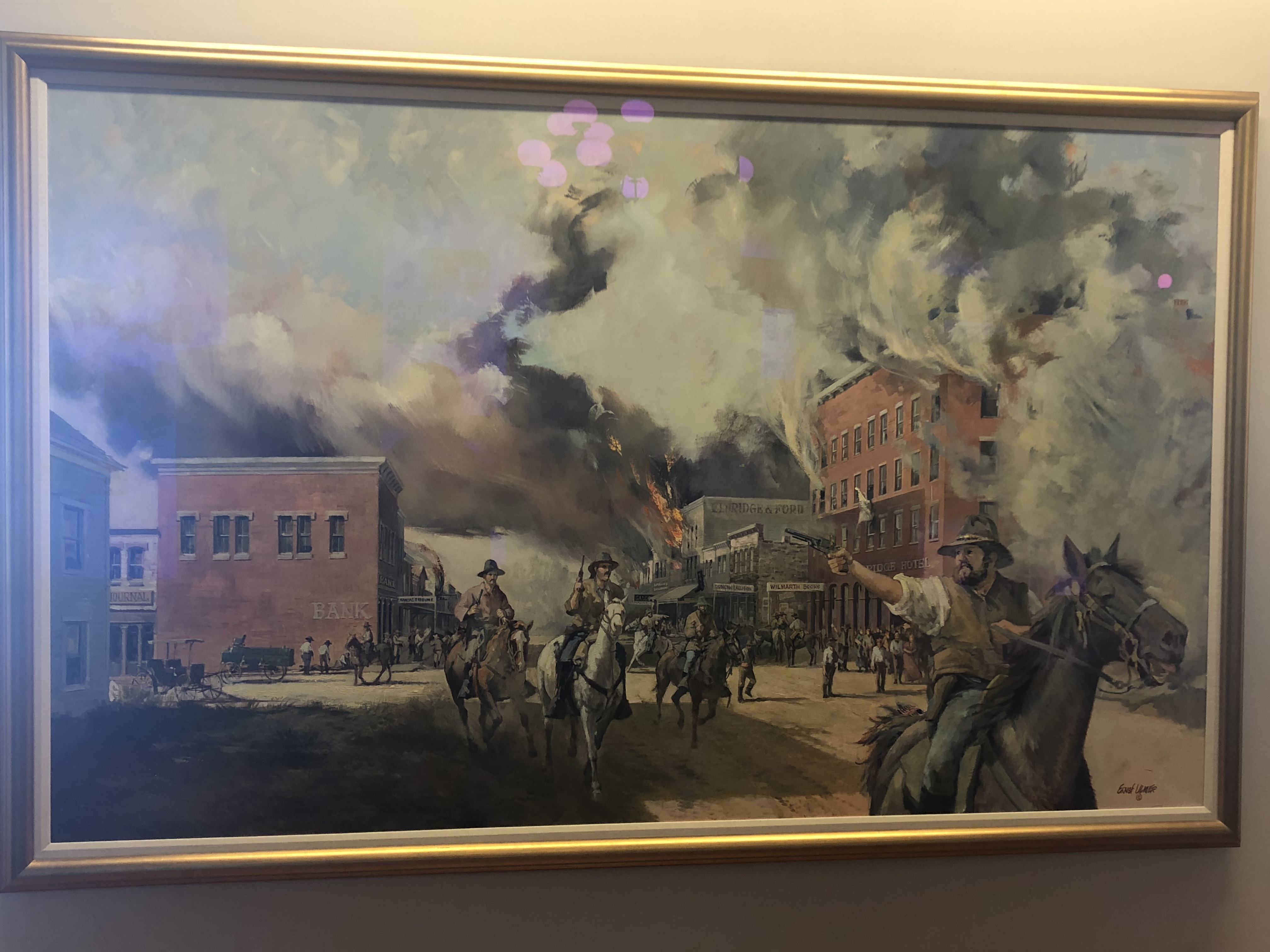 The museum itself is located on 1047 Massachusetts Street and was previously the Watkins Bank; the exhibit was opened on the 150th anniversary of Quantrill’s Raid in 2013. The exhibit is free to all visitors and was constructed with two main purposes according to the curators: to memorialize the events in Lawrence in a meaningful location, and to capture the essence of the events in a way that would appeal to visitors seeking an accurate historical experience.

The raid in the city of Lawrence, which was founded by anti-slavery settlers, can be considered a cumulation of the tensions between pro-slavery and anti-slavery parties in the surrounding area. Kansas became a political battleground when it was granted the right to determine whether slavery would be permitted in its borders. Many state constitutions, both pro and antislavery, were drafted before the Wyandotte Constitution was approved to be the State Constitution of Kansas when it entered the Union as a free state in 1861. Because of the political disagreements, violence erupted in Kansas with both sides contributing to bloodshed, gaining the state the nickname “Bleeding Kansas”.

Before the Quantrill’s Raid in Lawrence, abolitionist “Jayhawkers” had also killed many pro-slavery settlers. John Brown, an abolitionist who moved to Kansas with his family in 1855, was a key figure in much of the violence. He led a company known as the “Liberty Guards” in their murder of non-violent pro-slavery settlers camped near the Wakarusa River which became known as the “Wakarusa War”. Following the sack of Lawrence by pro-slavery forces in 1856, he led his sons and two others as they hacked five pro-slavery settlers to death in the “Pottawatomie Massacre”. Brown ultimately left Kansas to prepare for his failed raid of Harper’s Ferry, for which he was hanged, but was a major instigator of the violent counter-attacks during following years.

Another key figure was James Lane, a politician who was elected as one of Kansas’ first U.S. senators when it entered the Union, who led a group of guerrillas known as “Lane’s Brigade”. There were several groups like his, such as Colonel Charles Jennison’s “Jennison’s Jayhawkers”, who participated in the violence along the Kansas-Missouri border against Confederates “Bushwhackers”. On September 23, 1861, James Lane’s forces burned Osceola, Missouri to the ground and killed nine men. During this time William Quantrill, who was a former Confederate soldier, had formed his own pro-slavery guerrilla force and conducted attacks in the Kansas towns of Shawnee and Olathe. In 1863 the tensions were peaking; female family members of “Bloody Bill” Anderson, one of Quantrill’s soldiers, were seized and four were killed when the prison they were being held in collapsed. General Thomas Ewing Jr. issued an order that authorized the arrest of all those who aided bushwhackers and forced all the wives and children of those bushwhackers to leave Kansas immediately. William Quantrill launched his raid on Lawrence three days later and led a 400-man militia in the killing of over 200 people.

The exhibit remembers the raid through artifacts from locations that were affected, stories from Lawrence residents who experienced it and showcasing Lawrence’s recovery in the aftermath. The physical location of the museum was also involved in the events of Quantrill’s Raid. In 1863, the museum was a house where Wesley and Elizabeth Duncan lived; Wesley owned a local store and the raiders came to his home and offered to spare his life in exchange for the location of the store, which they ransacked. Remembering the events in an accurate and neutral way can be difficult, as there is misinformation on details from this period as James Malin notes in his article that is cited, but the exhibit’s content creates an authentic experience.

At the center of the exhibit is a room which features an interactive display that highlights some of the individual events and their location, such as Frederick Kimball’s death at 646 Kentucky Street, the church at 724 Vermont Street that was used as a morgue, and the Union army meeting place that was attacked. The room also has a case which contains artifacts from the raid including floorboard from a house that was destroyed and window panes that were fused together by the intense fire. The museum cycles sub-exhibits that focus on more specific individual stories, such as those of local women and their heroic actions during the raid, that create a more personal connection for visitors. One last significant aspect of the remembrance is history regarding how Lawrence came together in commemoration, including a seven-year effort to move the bodies to a new burial ground, a relief bill that provided compensation to those affected, and parades featuring survivors that continued for nearly one hundred years.