Founded by Father Junipero Serra in 1772, California’s fifth mission has survived to convey its name to the city that grew up around it. Mission Church of San Luis Obispo’s design is unusual: its combination of belfry and vestibule is found nowhere else among the California missions. An unusually large secondary nave is situated to the right of the altar, making this the only "L"-shaped mission church among all of the California missions. Today it is a parish church of the Diocese of Monterey, and is one of the few missions that still stands upon its original site. 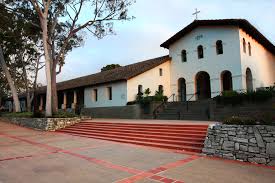 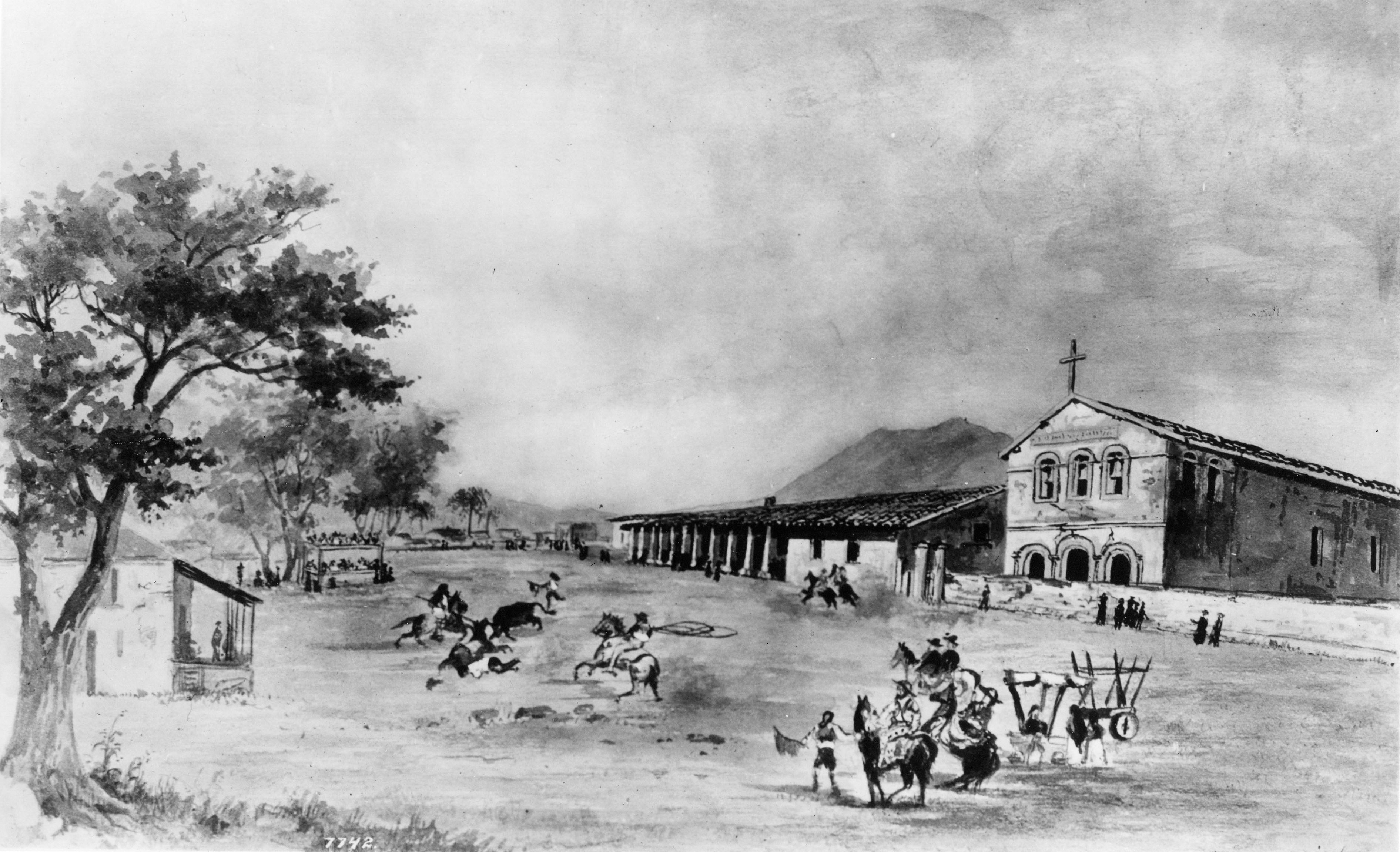 Fountain of bears and Indian boy. 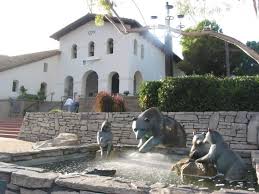 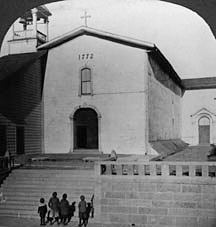 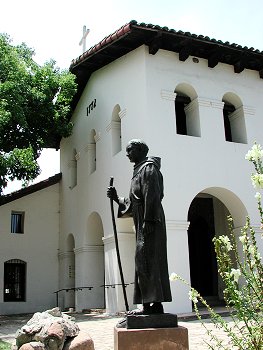 Mission San Luis Obispo as drawn by Edward Vischer, a German immigrant whose fascination with the California missions resulted in one of the best visual records of early California life. 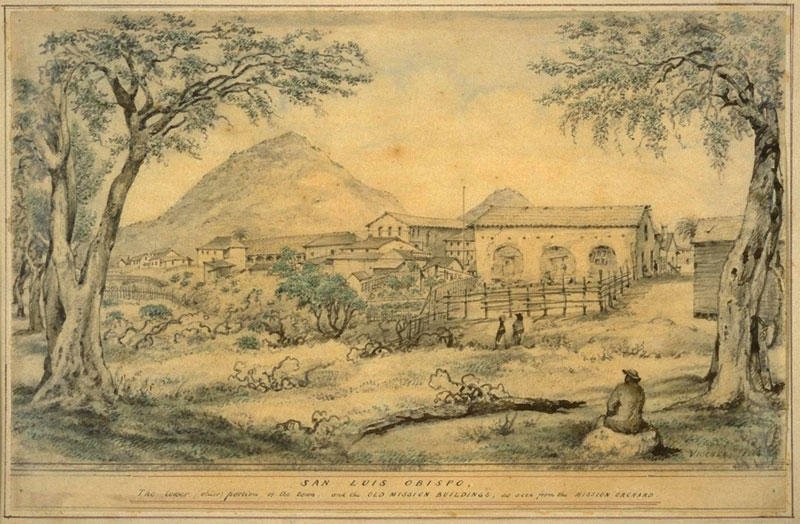 Edwin Deakin's study of San Luis Obispo. Deakin's paintings in the early 1900s were instrumental in generating interest in restoring these unique monuments to California's colonial past. 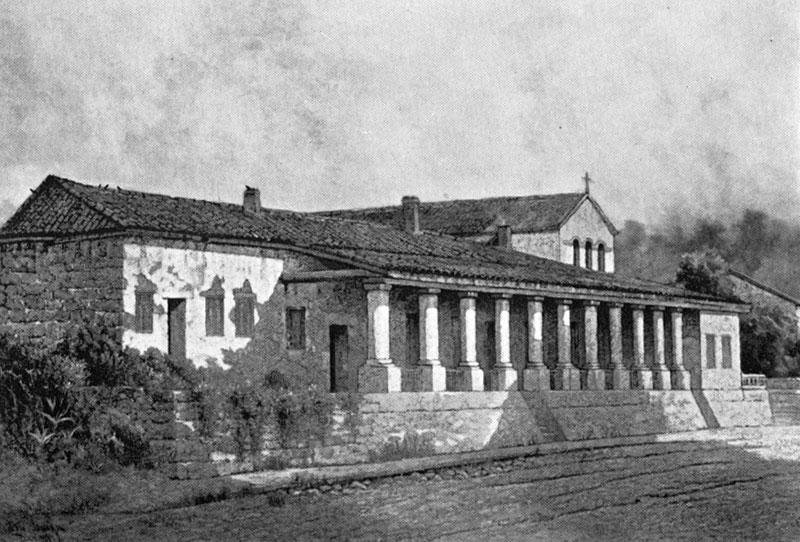 Floorplan of the Mission. Note the unique "L" shape, which has no like among the 21 California missions. 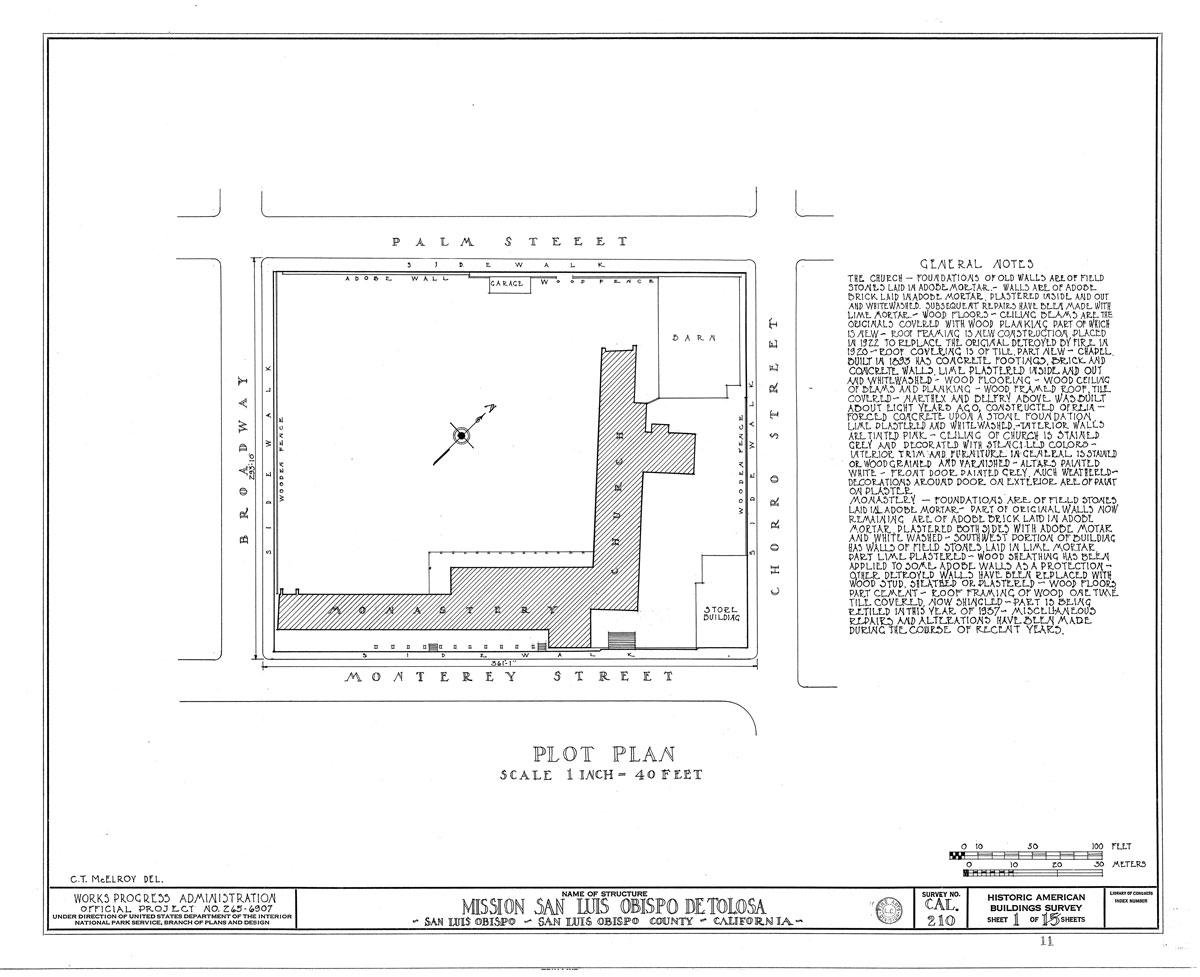 A fanciful depiction of Joaquin Murrieta, the famed bandit who was one of California's most wanted men in the 1850s and inspiration for popular fictional character, "Zorro." He took over the mission for a few days in 1853. 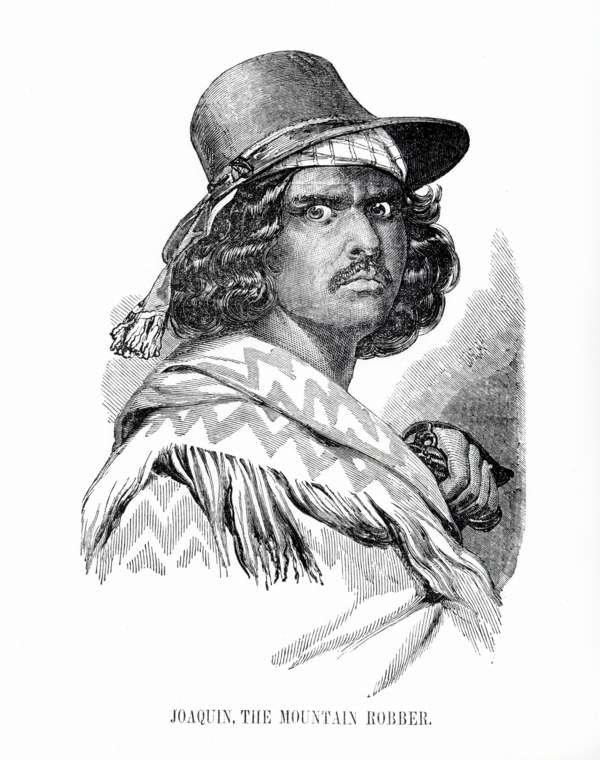 On September 7-8, 1769, Spanish soldier-explorer Gaspar de Portola (credited with being the first European explorer of California) traveled through the San Luis Obispo area on his way to rediscover the Bay of Monterey. The expedition's diarist, Franciscan Padre Juan Crespi, recorded the name given to this area by the soldiers as “Llano de los Osos,” or the level of the bears (Bear Plain), noting the abundance of bears in the area. Since then, various translations of the Crespi Diary have called this area “La Cañada de Los Osos” (The Canyon of the Bears) which has been further mistranslated as the “Valley of the Bears.”

The large grizzly population would soon prove instrumental to the Spanish presence. In 1770, Friar Serra founded the second mission, San Carlos Borromeo, in Monterey--the first mission in Northern California, separated by roughly 450 miles. It was moved to Carmel the following year. By 1772, the number of missions had risen to four, three of which were grouped together at the northern edge of Alta California, far away from Spanish supply lines in Mexico. They struggled to raise enough food for their burgeoning populations of converted native peoples (neophytes), and the newfound communities faced starvation.

Remembering the “Valley of the Bears,” a hunting expedition was sent to bring back food in the summer of 1772. Over 25 mule loads of dried bear meat and seed was sent north from Mission San Diego to relieve the missionaries, soldiers, and neophytes. The Native Americans were impressed at the ease with which the Spaniards could take down the huge grizzlies with their muskets. Some of the meat was traded with the local people in exchange for edible seed. Noting the area’s richness and strategic position, Serra decided that La Cañada de Los Osos would be an ideal place for the fifth mission. The area had abundant supplies of food and water, the climate was also very mild, and the local Chumash were very friendly. With soldiers, muleteers, and pack animals carrying mission supplies, Father Serra paused in the Valley of the Bears en-route to San Diego and on September 1, 1772, celebrated the first Mass at the site with a cross erected near San Luis Creek. He departed the next day, leaving Padre Jose Cavaller, five soldiers, and two neophytes. It was the only mission to be founded by a single Franciscan friar (they were usually detailed in pairs), for at the time Serra had no additional friars to assign to the nascent mission.

The mission was constructed with the aid of the local Chumash Natives. Temporary structures were erected with poles and tree boughs. Fires soon claimed these (some reportedly begun by an Indian attack in 1776, prompting the mission to cast its own roof tiles to replace the flammable tule thatch that had been their roofing material); permanent adobe and tile structures were erected in their place. The Church and Priest's residence in the convento wing were built by 1794. Many other structures made up the Mission in the early days: storerooms, residences for single women, soldiers barracks, and mills. The mission, like its brethren, cultivated plentiful land for farming and raising livestock. Father Luis Martinez arrived in 1798, and would be with San Luis Obispo for over thirty years, and is notable for his genial, well-beloved reputation among the community.

By the time the Mexican War for Independence broke out in 1810, all California Missions were virtually self-sufficient. Receiving few funds from Spain, building proceeded for a few years due to the prosperity of the Mission. Between 1810-1820 native cabins, mill wheels, a granary were built, and the traditional mission quadrangle was completed. When Argentine corsairs (the only recorded pirate raid on the California coast) attacked several missions in 1818, Father Luis Martinez armed a large group of neophytes and marched south to Mission Santa Barbara. Arriving too late to confront them, he marches his makeshift army still farther south to Mission San Juan Capistrano before reluctantly turning back northward.

After 1818, the Mission's prosperity began to decline, though in 1827 visiting French Captain Auguste Duhaut-Cilly noted that it was “very rich...with a rather good anchoring spot not far away.” Despite the efforts of Father Luis Martinez, the new Mexican government of California was determined to strip the missions of their property. In 1830, Governor Jose Echeandia finally arrested Martinez on trumped-up charges of treason and shipped him back to spain.  By the 1840s here was little left of the thriving community of earlier times.

Buildings were crumbling and there were not sufficient funds to rebuild. In an “informe” (report) to the Government written in 1830, mission Presidente Friar Luis Gil y Taboada stated: “The hospital and portions of neophyte villages are in ruins and the rest of the village threatens to fall into ruins...the front of the Mission Church has to be taken down, because it threatened to tumble over.” In his 1832 informe, he was still more dismal: “Every day the Mission structures are decaying more and more for want of sufficient hands to renovate them...the belfry mentioned last year has been demolished by rains therefore we built another of masonry.”

The mission was secularized in 1835, and like its fellows was parceled out to private owners, though one of the friars was permitted to retain a few rooms in one of the old crumbling structures. Governor Pio Pico sold San Luis Obispo to Captain John Wilson for $510 in 1845, and after the United States annexed California and it became a state, the town was briefly seized by famed California bandit Joaquin Murrieta in 1853. The highwayman and his gang slept in the old mission garden.

Serious restoration of the dilapidated mission began in 1935, and today the mission is known for the exceptional quality of its museum.

Duhaut-Cilly, Auguste. A Voyage to California, the Sandwich Islands, and Around the World In the Years 1826-1829. Los Angeles, CA. University of California Press, 1997. Translated by August Fruge and Neal Harlow. pp. 75.