A general laboratory building on NC State Campus, built in 1960 with six floors of labs, computer rooms and classrooms. Honors Gertrude Mary Cox, a statistician and the first woman to be Full Professor and Department Head at NC State University. 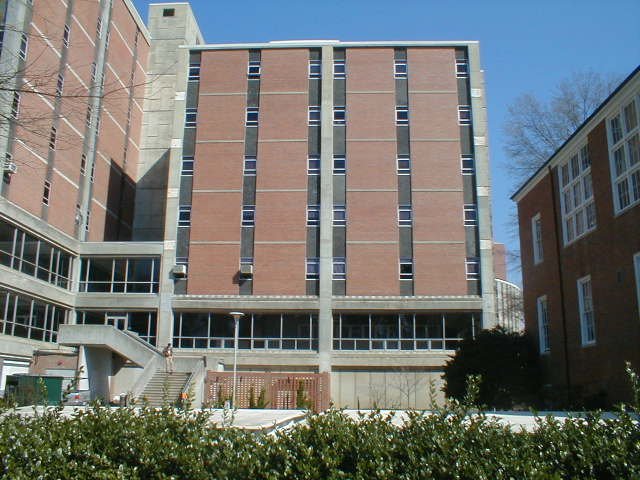 Currently, Cox Hall is a six-story class building on North Carolina State University's campus, housing classrooms, computer rooms and labs. It was built in 1960, a year after the college received a university title and the campus was experiencing a growth of incoming students. It was named as an honor to Gertrude Mary Cox, a statistician and the first woman to be Full Professor and Department Head at NC State University.

Gertrude Mary Cox lived from January 13, 1900 - October 17, 1978. She was born in Iowa on January 13, 1900 and lived there  for her entire childhood and college education, until leaving to attend graduate studies in Berkeley, California. After graduate school, she moved back to Iowa, where she became the head of the Statistical Laboratory at Iowa State.

Seven years later, she was offered a position at NC State University, where she remained for the rest of her career. Even after she retired from her Professorship, Cox continued to research, publish and teach, doing numerous consulting jobs around the world, such as Egypt and Thailand,  and even contributed to the start of RTI in the late 1950s.

Throughout her career, Cox was recognized for her work, including the International Award for Distinguished Service to Agriculture by Gamma Sigma Delta in 1960 and given Honorary Life Membership of the Biometric Society in 1964. In 1975, she was elected to the National Academy of Sciences.