At a time when most cities were overcrowded and dangerously unsanitary, public bathhouses became an essential weapon against the spread of disease. The Asser Levy Public Baths were built between 1904 and 1906 in a style reminiscent of Roman baths. The baths were built primarily for working-class citizens and the building demonstrates the city's determination that this facility would be well-regarded and well maintained with stunning Roman Revival architecture and features such as stone urns and vaulted ceilings. The building is listed on the National Register of Historic Places and is also a New York City Landmark. When threatened with demolition following its closure in 1973 after years of deferred maintenance, preservationists helped to save the building which now serves as a public swimming pool, recreation center, and health club. 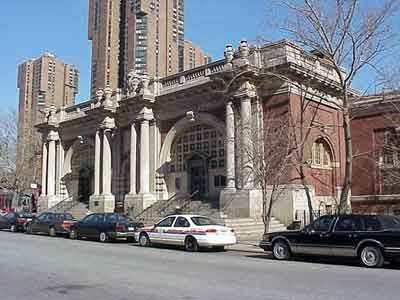 Entrance to the building 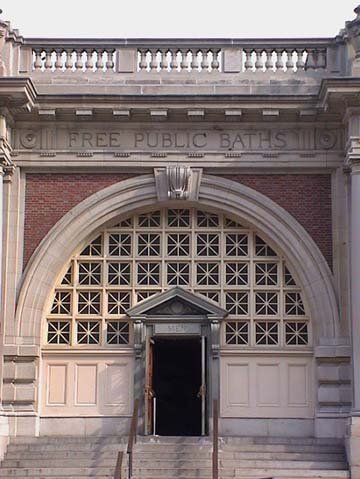 The New York City of the early twentieth century grew each day by thousands as waves of immigrants from Eastern and Southern Europe entered the city. Most immigrants clustered together in ethnic enclaves within the city. Immigrant and other working-class neighborhoods in the city became extremely overcrowded and with little to no workable plumbing or sanitation, they became breeding grounds for disease. A survey in 1896 found that in the city's Lower East Side, there was one bathtub for every 79 families.

To combat the spread of disease, cities began to build public baths. In New York, Dr. Simon Baruch became a champion of building public baths, arguing that the baths would improve morality as well as living conditions. By 1912, there were 23 public baths in the city, bathing more than 5 million people each year.

The Asser Levy Public Bath was completed in 1906. It was not the first public bath in the city, but it was one of the most beautiful. Designed by the architecture firm Brunner & Aiken, the building was meant to replicate the Roman baths, and features stone urns, vaulted ceilings, and balconies.

During the tenure of Robert Moses, the city's Parks Commissioner for much of the twentieth century, two swimming pools were added to the bathhouse. The pools--one indoor and one outdoor--are still in use at the bathhouse, which is now part of the Asser Levy Recreation Center.

By the late twentieth century, the bathhouse fell into disrepair and was threatened with demolition. It was closed in 1973 for repairs, but the repairs were years in coming. After years of decline, the building was renovated in the late 1980s and though there is no longer a need for the baths, the building is used for a public swimming pool and a health club. It is a New York City Landmark and is listed on the National Register of Historic Places.