This monument was dedicated in 1888 and honors Union soldiers from Brooklyn and surrounding Connecticut communities. The monument was designed by sculptor Karl Gerhardt, the same artist who created the nearby monument honoring American Revolution hero Israel Putnam. The front face of the Civil War monument bears a dedication honoring the men of Brooklyn "who fought on land or sea for the preservation of the Union.” The east face lists the battles of Antietam and Gettysburg while the west face of the monument bears a bronze plaque listing the names of approximately 165 residents who served in the conflict. The monument also lists battles that were fought by local regiments including Winchester, Drury’s Bluff, Cold Harbor, Petersburg, and Cedar Creek (Virginia) and New Bern (North Carolina). 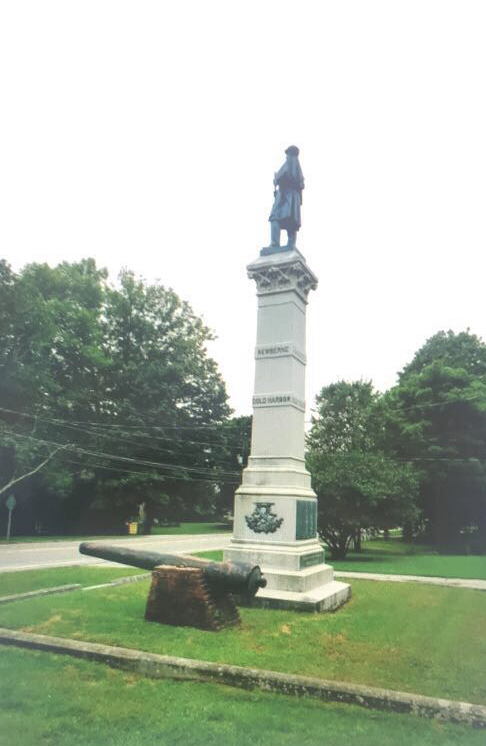 This bronze sculpture of a Civil War Soldier, standing atop a 30-foot grey granite square column, is described by the Smithsonian Art Inventories Catalog as follows: A low pedestal and tall shaft of light gray granite surmounted by a bronze soldier, sculpted by Gerhardt and cast by Ames Bronze Foundry. The figure stands, with proper left leg slightly forward. Butt of rifle, at right angles to proper left foot, extends over the edge of the statue base. He wears a long overcoat, folded back, with kit and bayonet suspended from the belt. The two-stage base supports a polished die and a bronze Seal of Connecticut. On the north side of the base, a corresponding bronze trophy of crossed cannon with dates 1861-1865. On the rear of the base, a bronze plaque of names; and on the south side of the base, a bronze navy emblem."

The two-stage base of SSM, Brooklyn, supports a die on whose polished front face is incised the lettering recorded below. The Seal of Connecticut in bronze is over the die. On the north a corresponding bronze trophy of crossed cannon with the year dates 1861-1865 is on the face of the die, there being no lettering. On the west (rear) there is no trophy; the die is covered by the bronze plaque of names, which is above the presentation lettering. On the south face of the die the trophy is a naval emblem in bronze. The shaft, not tapered, is divided by the two raised bands of polished battle names. The cove of the cornice is embellished as a robust Victorian-era foliated capital.

The figure stands with his left knee slightly bent and left foot forward, a position known as in place rest. He holds his rifled musket, which has a sling, with its butt at a right angle to his left foot and extending over the edge of the statue base. Both hands are on the barrel, but separated, left over right. The left corner of the long overcoat is folded back, with cap box and bayonet suspended from the waist belt, and the cape is over the left forearm but thrown back over the right shoulder. The soldier is wearing the typical kepi, looking ahead slightly to his left.