Native Americans from thousands of years ago have left their mark in modern-day Ohio by building mounds and massive earthworks. One such mound, the Serpent Mound, was excavated by Harvard University archaeologist Frederic Ward Putnam in the late nineteenth century. Based on his work, later archaeologists attributed the effigy to the Adena culture, which flourished from circa 1000 B.C.E. to 50 C.E. This theory on the site's origin was widely accepted until 1991 when pieces of charcoal found within the Serpent Mound were radiocarbon dated to be approximately 900 years old. Going by this date, the creators of the Serpent Mound likely belonged to the Fort Ancient culture (circa 1000 C.E.-1750 C.E.). In 2014, however, new radiocarbon dating suggested that the mound was built in 300 B.C.E. and possibly renovated later. The site is listed on the National Register of Historic Places under Stubbs Earthworks. 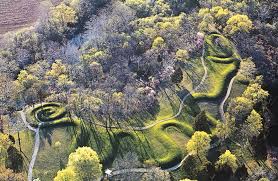 Illustration that reflects the positioning of the mound over the creek. 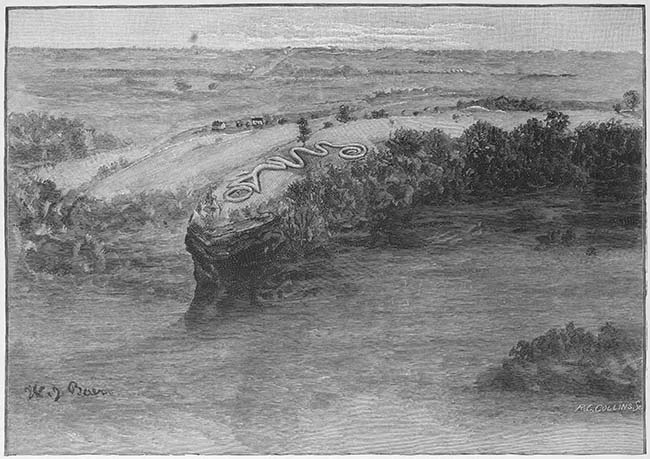 State marker for the Serpent Mound. 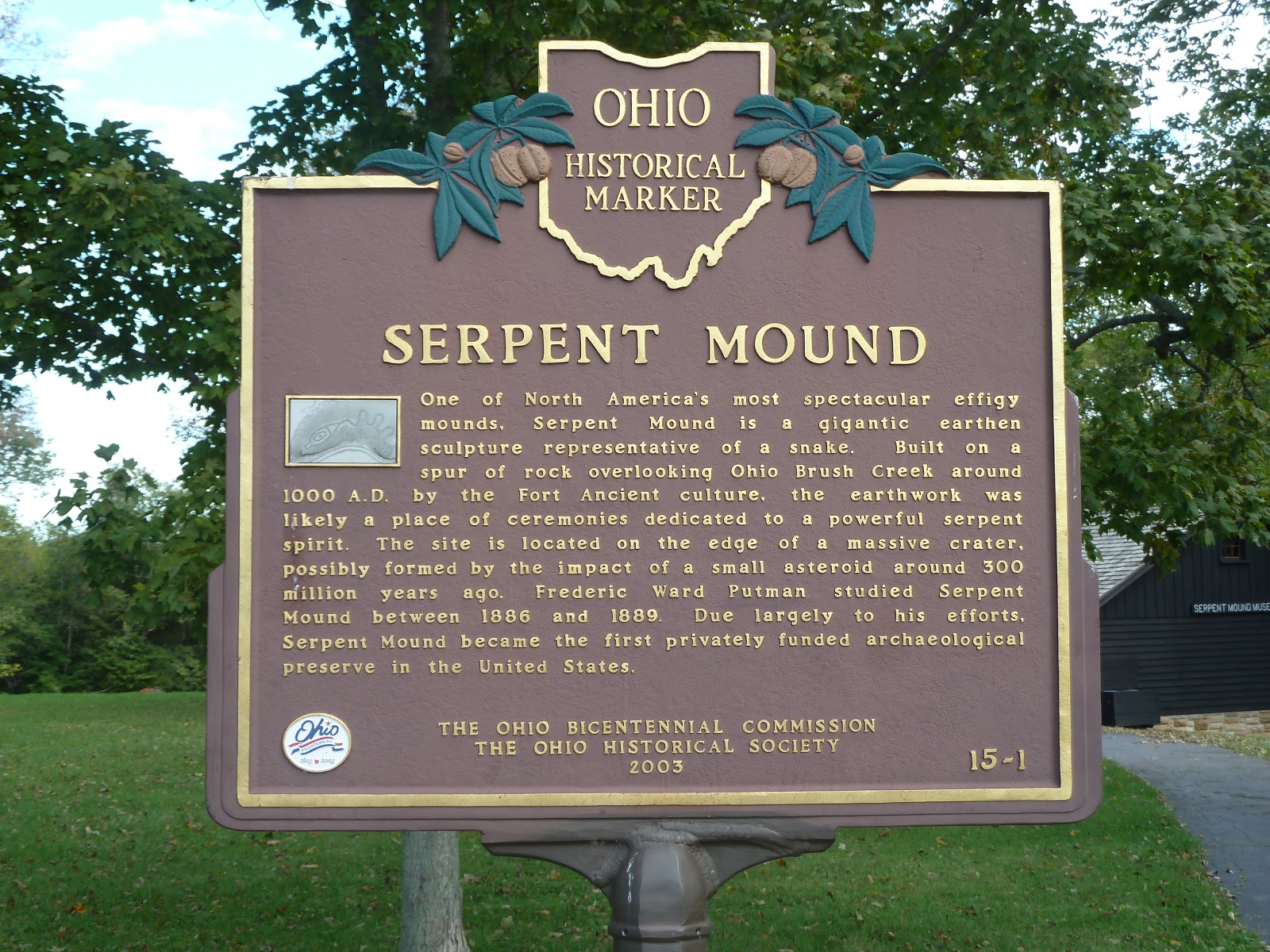 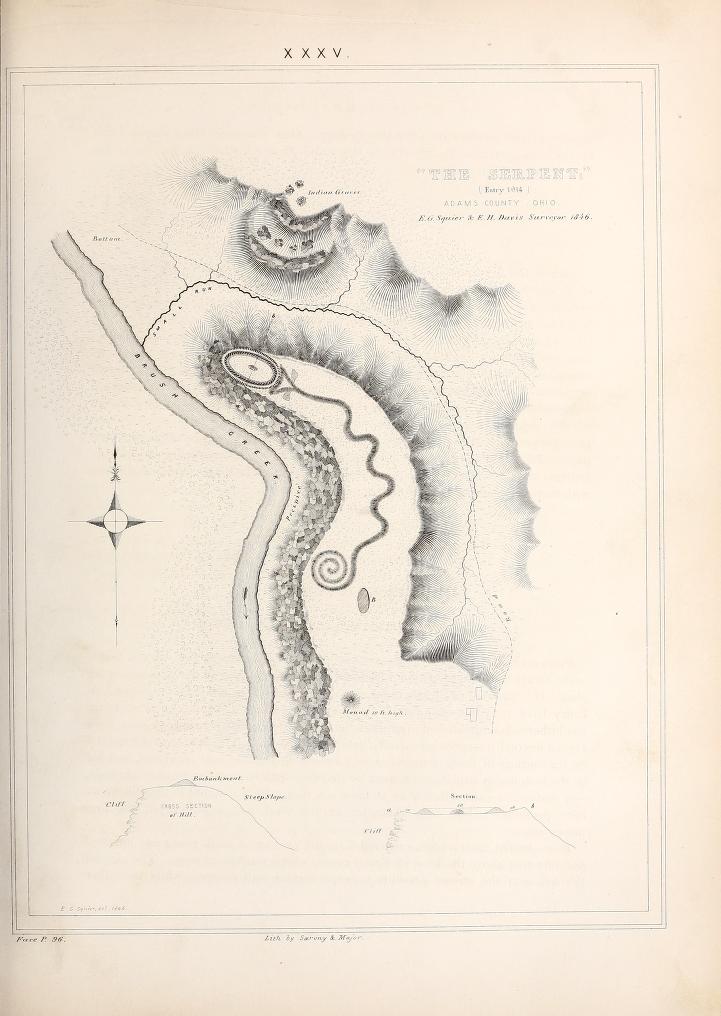 The Serpent Mound is the largest surviving prehistoric effigy mound in the world. It is also one of only two effigy mounds in Ohio. The mound measures 1,348 feet long and stands approximately three feet tall. The first known survey of the mound, also called the Great Serpent, was performed by E. G. Squier and E. H. Davis in 1846. Their findings were published in the book Ancient Monuments of the Mississippi Valley (1848). Even they seemed to have a difficult time ascertaining exactly what the Great Serpent was, ultimately classifying it as a work of sacred origin. Up until this time, similar mounds were thought to be only of a defensive nature or for burial purposes. The Great Serpent did not fit into either category. Now, such structures are known as effigy mounds (effigy meaning a sculpture or model of a person or animal).

Not only is the Serpent Mound’s purpose unknown, so are its creators. Due to a lack of related artifacts or other records, archaeologists and historians have been forced to rely on non-mound related artifacts and carbon dating to theorize about the mound’s origins. Carbon dating completed in 1996 suggested that the mound was either built or renovated around 1070 C.E. when the Fort Ancient culture was active. This went against the previous theory, which held that the Adenas were the builders of the mound. To further confuse matters, two nearby mounds belong to the Adena, while a third is attributed to the Fort Ancient culture. In 2014, new radiocarbon dates again pointed to the Adena, around 300 B.C.E. One possible explanation is that the Serpent Mound was made by one culture and then renovated by a later culture. This also means that the mound could have had different purposes over the years.

The Serpent Mound was designed using a layer of clay and ash, then reinforced with stones. It appears that the Serpent was laid out all at one time. Underneath the site is an area of folded bedrock. Though it may not have been known by the builders of the mound, the geologic features of the site are very interesting, too. The head of the Serpent is located at the beginning of a steep cliff that looks over the creek below. The rest of the Serpent lays on a high plateau and conforms to the natural topography of the crater rim above the Ohio Bush Creek. Geologists believe that the four-mile-wide circular crater is the result of either a crypto-explosion or an asteroid collision having happened approximately 250 million years ago. It has been dubbed "The Serpent Mound Disturbance".

Today, we also know that the curves of the Serpent line up with different yearly equinoxes. In fact, when visiting the site, there are signs explaining which equinox the different parts of the Serpent Mound align with. Some of the most popular times to visit the mound are during the sunset celebrations held annually on June 21st and during the December Luminaria. Each year on the winter solstice, the outline of the Serpent is lit up with lights by volunteers, giving the visitors a unique view of this slithering giant.

Open daily, year round, from 9:00 am - dusk Special extended hours: Dawn-dusk on the solstices and equinoxes