This historical marker, which is situated on E. Nueva Street on the grounds of Bexar County Courthouse, describes the life of prominent San Antonio businessman and politician Erasmo Seguín (1782-1857), whose home was near this location. His most notable political role was serving as San Antonio postmaster from 1807 to 1835. He was also the only representative from Texas to go to the Mexican Constitutional Convention of 1824 (Mexico won its independence from Spain in 1821), where he supported colonization by American settlers to Texas. Over a decade later, he supported the Texas Revolution (1835-1836), the uprising that established the Republic of Texas. 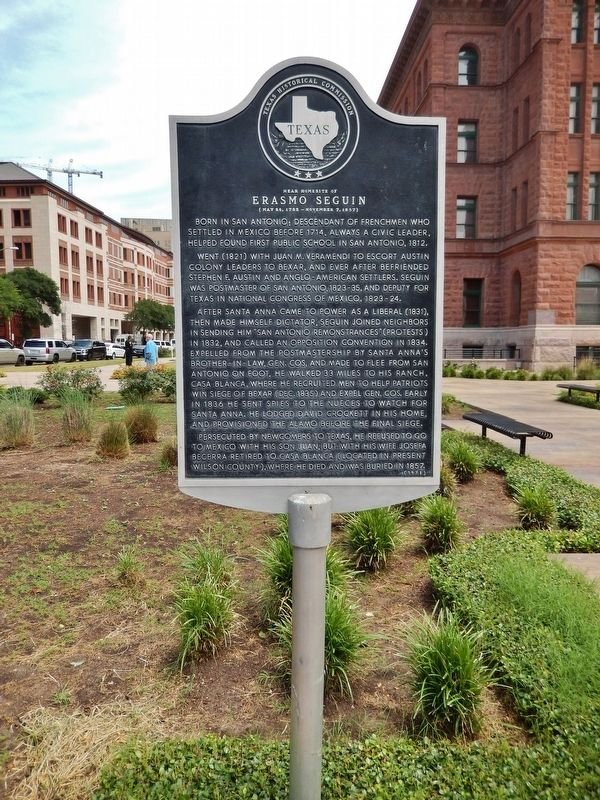 Seguín was born on May 26, 1782 here in San Antonio, the third of seven children. Around 1800 he married María Josefa Becerra, who was a daughter of a noncommissioned offer; they had three children together, two of whom survived until adulthood. During these early years of their marriage, Seguín helped establish the city's first public school in 1812. He also acquired land that once belonged to the San Antonio de Valero mission (aka, the Alamo) about 30 miles away, hiring vaqueros (Mexican cowboys) to run it.

Seguín came to support Mexico's rebellion against Spain during the Mexican War of Independence (1810-1821). He initially supported Spain and helped quell a revolt in San Antonio in January 1811. His loyalties came under suspicion, however, in 1813 and he was labeled a traitor and fired from his job as postmaster. Seguín was not cleared of these charges until 1818 and assumed his position as postmaster once again.

From December 1823 to September 1824, Seguín served as the aforementioned Texas representative in Mexico during the Convention of 1824. He was a member of the colonization committee, where he promoted the interests of American settlers in Texas and other issues. After returning to San Antonio, he enlarged his ranch, planted cotton and corn, and continued to raised cattle, horses, and mules.

The decade leading up to the Texas Revolution was one of tension between the Mexican government and Texans (American colonists and Tejanos). The Mexican government had become increasingly centralized and citizens' rights diminished. Immigration from the U.S. was also becoming more limited. As for Seguín, who supported the rebellion, he was once again removed from his job postmaster, this time by Mexican General Martin Perfecto de Cos. Seguín was forced to walk to his ranch but it was there that he supplied the Texian Army with food and supplies. Both Mexican and Texian armies raided his ranch. In 1840, the newly created Republic of Texas reimbursed him $3,004 for his efforts. In the last period of his life, Seguín worked on his ranch. He passed away on October 30, 1857.