The Tate Center, located in the heart of the UGA campus, was opened in 1983. It’s goal is ” to provide facilities, services, and programs for the University community.” Inside it boasts amenities such as food service areas, a print and copy service, post office, business office, UGACard office, study lounge, TV lounges, and meeting, conference, and multipurpose rooms 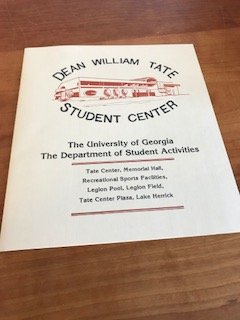 Bio of Dean Tate found in the "Argo Papers" from the Special Collections Library. 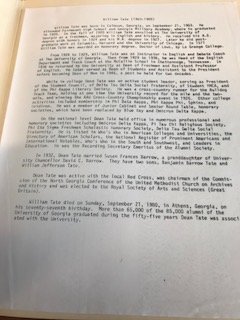 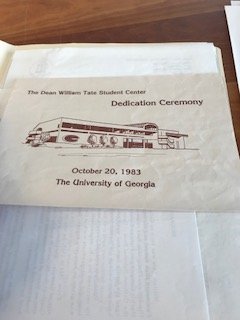 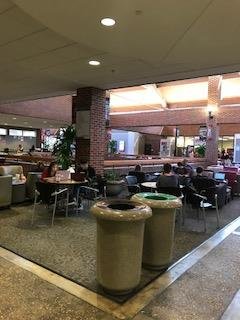 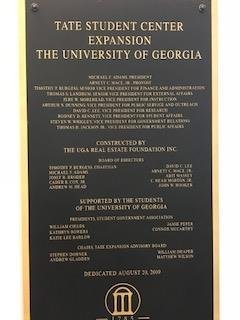 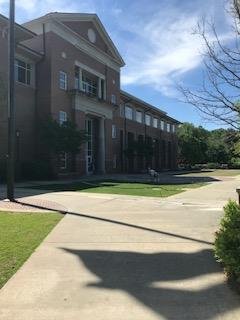 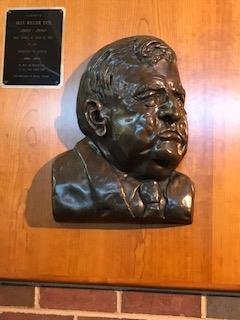 Named after William Tate, the Tate Center was opened on October 20th, 1983. William Tate was born in Calhoun, Georgia in 1903 to William and Edna Tate. Mr. Tate was responsible for founding the Georgia Marble Company. Mrs. Tate graduated from LaGrange college and went on to become the President of Fairmount Bank and manage the family farm. William Tate enrolled in Georgia in 1920 and went on to receive his degrees in English and History; and later, in 1927, his Master’s. In addition, Tate also served as an English instructor and debate coach on campus. While enrolled at UGA, Tate cemented himself fully into becoming a leader amongst the UGA student body. In addition to running on the track team, he was a member of many highly esteemed societies on campus including the Delta Tau Delta Fraternity, the Student YMCA, and the Student Council – all which he served as their President. He eventually went on to serve as the Dean of the University and was instrumental in the desegregation of the University, ushering in its first African American students, Charlayne Hunter and Hamilton Holmes in 1961. Dean Tate also had an honor society formed in his name in 1990.

The Tate center was designed by the architecture firm, Miller, Waltz, and Diedrich. A firm based in Atlanta. Georgia. And was built by West Point Construction Company, along with DAC Construction. For the opening dedication ceremony, Representative Bob Argo was selected to be the speaker.

The student center was built for the benefit of the entire University community and quickly became the “heart” of student activity on campus as well as the home of the Department of Student Activities (now known as the Department of Campus Life). For nearly three decades, the many programs and services housed within Tate have been designed to meet the social, cultural and recreational needs of UGA’s student body.

In order to stay on the cutting edge of campus-life the $58-million Tate Student Center Expansion and Renovation project was initiated to drastically increase space for student programs and activities. The Tate Student Center Expansion opened its doors to the University community on June 1, 2009. Incoming first-year students and their parents were among the first to see the new facility as part of orientation. On August 20, 2009 UGA President Michael F. Adams led a gathering of faculty, staff, administrators and students in cutting the ribbon, officially dedicating the expanded facility. With more than 95,000 square feet of additional space, the Tate Expansion features meeting rooms, multiple dining options, numerous lounges and gathering spaces and a 12,000 square-foot multipurpose room for large scale activities and events. Todays Tate Student Center is among the finest facilities of its kind and will continue to be a point of pride for current and future generations of UGA students.

It should come as to no surprise that the Tate Center is located in the heart of the UGA Campus. It serves as a comprehensive location for all UGA students. Even more fitting is its name. Being named after one of the most iconic individuals to serve the UGA community in its history is truly an honor. A man that embraced change and stood tall in times of great turmoil should be the ideal candidate for such a dedication. It’s only right that someone that stood for fairness and equality has the building named after them be the heartbeat of the campus. Students and the school mission statement follow Dean Tate’s actions so hopefully his beliefs will carry through for generations to come in the Tate Center.