This beautiful historic home was built in 1893 by French immigrant Mayer Halff (1836-1905). Architect Alfred Giles designed it combining Richardsonian Romanesque and Eastlake styles. Halff made a living running a successful wholesale dry goods company with his brother, Solomon. They also began cattle ranching, eventually owning a million acres in land in West Texas, and banking as well. These activities contributed to the city's growth as well as the state's cattle industry. The house is located in a former residential neighborhood that was redeveloped in the 1960s for the six-month-long world's fair called HemisFair ’68. It is one of 22 historic structures still standing that were saved from demolition. It has been restored but as of April 2019, it is not clear whether the house is open to visitors or is occupied by a commercial tenant.

The Halff House is one of 22 historic structures in Hemisfair Park. 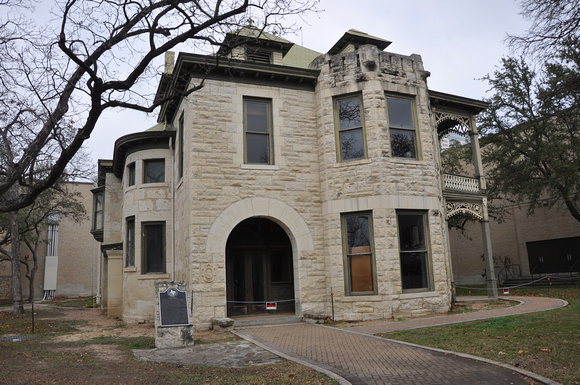 Mayer Halff was born on February 7, 1836, in Lauterbourg, Alsace-Lorraine, France. His elder brother, Aldolphe, immigrated to the United States in the mid-1840s, settling in Galveston where he sold merchandise from an ox wagon and on horseback. Mayer moved to Galveston in 1850 and opened in a mercantile store with Adolphe in the town of Liberty, which is 40 miles north of Houston. Tragically, Adolphe died in a hurricane while sailing in the Gulf of Mexico (he was on a trip to buy goods) in 1856.

The following year, Mayer's 19-year old brother, Solomon, arrived. As stated above, they established a wholesale business called M. Halff and Brother. Mayer started to accept cows in payment for goods and bought grazing land for them. This how the brothers got into cattle ranching; Mayer managed the ranches and Solomon managed the store. They moved to San Antonio in 1864, where they opened a second store.

Notably, Mayer was one of the first ranchers to introduce Hereford cattle (a breed from Britain) to Texas. At the peak of the cattle ranching industry, the Halffs led thousands of cattle to Kansas and, in one very successful year, they branded 35,000 calves—the third most in the country.

It is not clear exactly when the brothers got into banking but it seems it was around the turn of the century. Mayer founded and served as president of the City National Bank of San Antonio. He and Solomon also established Alamo National Bank, where Solomon served as vice president. Solomon passed away on May 29, 1905 and Mayer on December 23.

The neighborhood where Mayer Halff lived was aptly called Germantown for the large German community that lived there. However, residents of several ethnicities lived there including Polish, Alsatians, Mexicans, and African Americans. There were several hundred homes in all, the earliest of which dated to the 1850s; the oldest dated to the late 19th century. There were also a Jewish temple (the Halffs were Jewish) and a Catholic church.

When the city decided to develop the neighborhood for Hemisphere 68', residents were forced to move. The area was close to downtown and next to the San Antonio River, so it was an ideal location for the fair and therefore very attractive to the city. City leaders came up with the idea for the fair originated in the late 1950s. The houses that were not torn down were used during the fair, including the Mayer House, which had a beer hall on the first floor.

In 2009, the city founded the Hemisfair Park Area Redevelopment Corp. to revitalize the fair site. It has renovated the houses and manages the park for public use.