The Carnegie Building was built in 1907 with a grant from Andrew Carnegie and an additional loan from the University's president. It was built to house the University's library but quickly outgrew its original purpose. It was used as a dining hall and later became the home of the Home Economics Department. It was known as the Commons for most of its life, only receiving the designation of The Carnegie Building after the Home Economics department moved out in 1996. Today it houses University budget and auditing offices. As of December, 2018, plans have been put into place to restore the exterior to its original look and renovate the interior to house the President and his staff in new offices.

The Carnegie Building in 1908, just after completion. 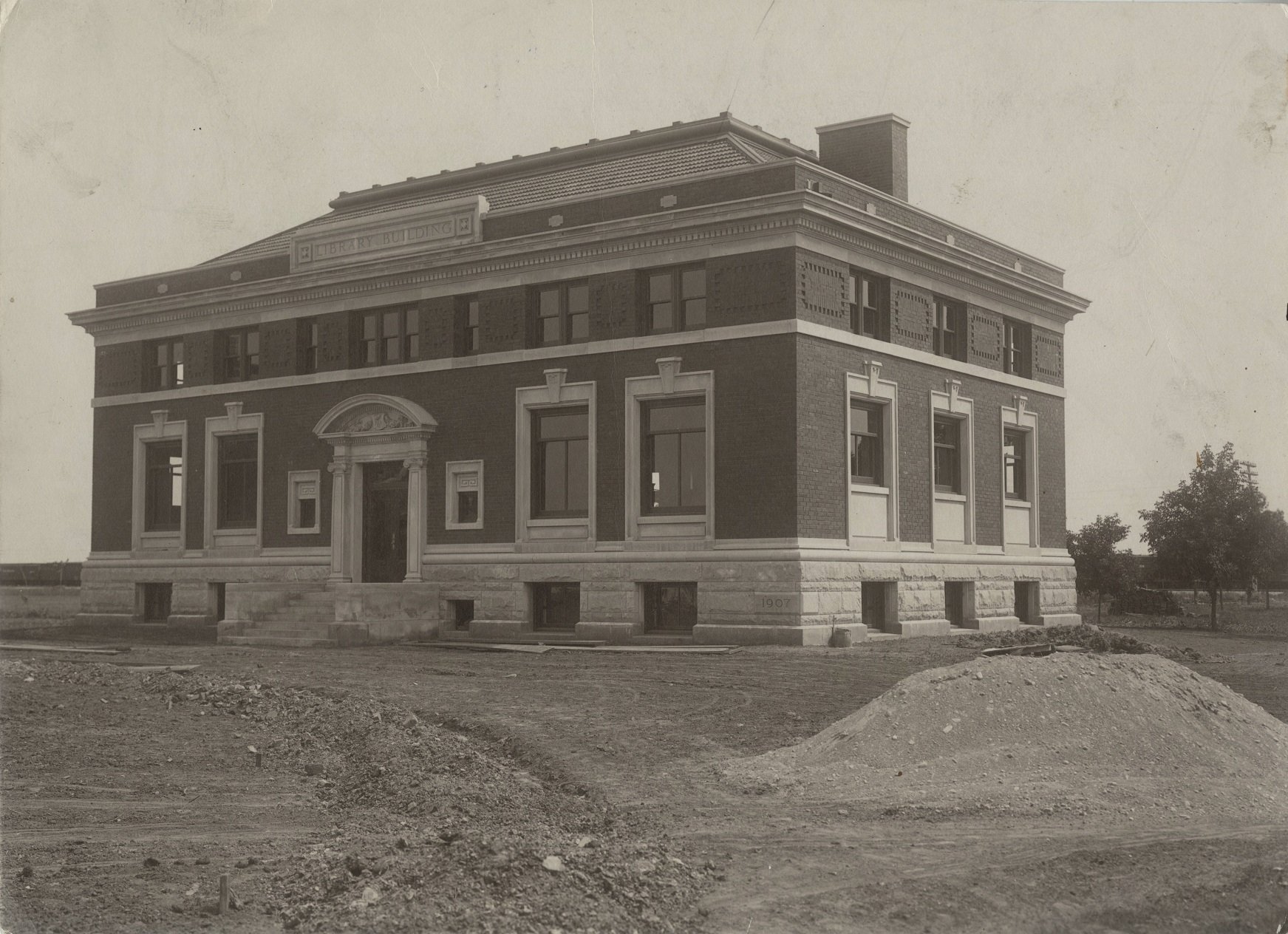 The Carnegie Building in 1948 with the smoke stack of the Steam Plant visible in the background. 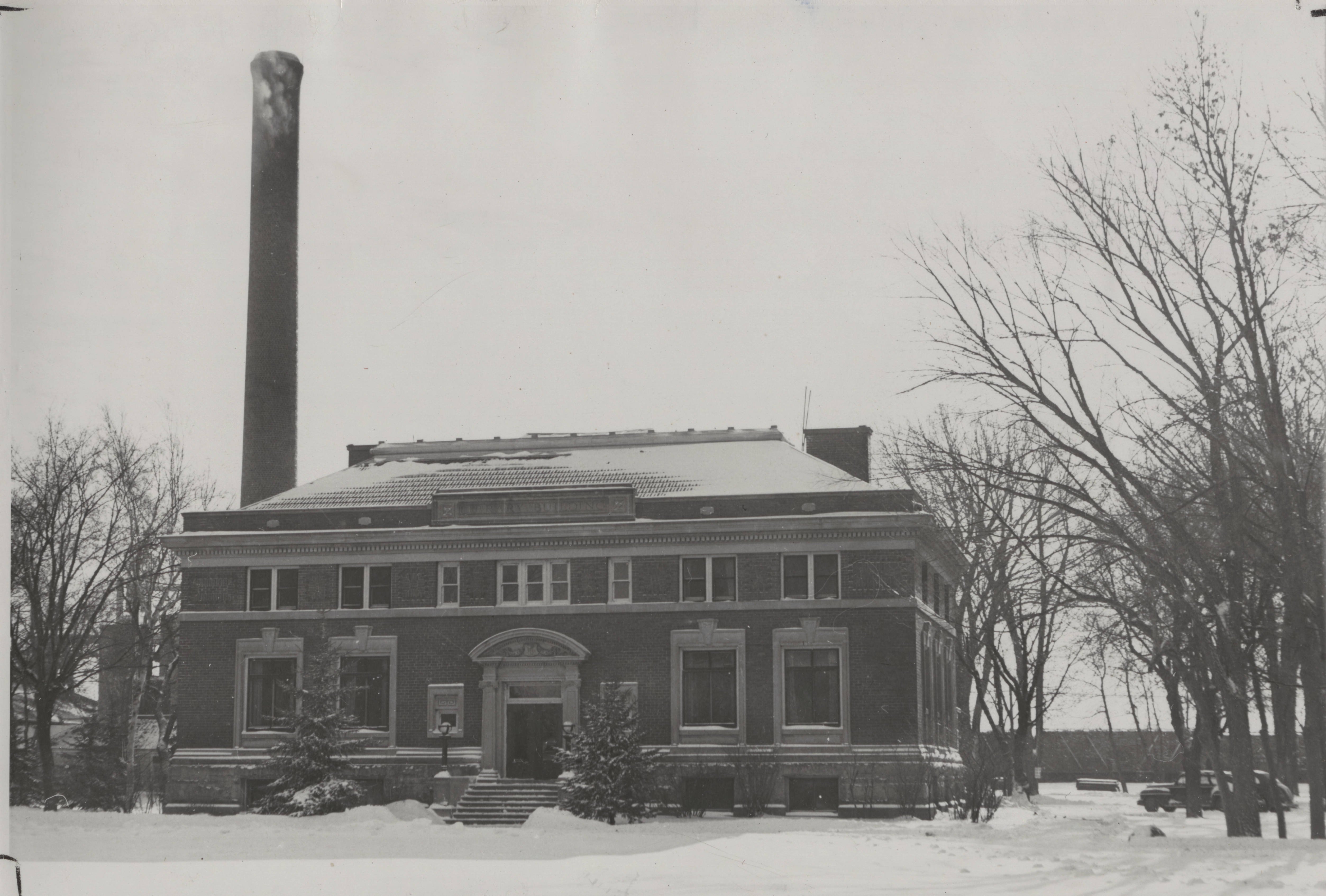 The Carnegie Building in 2019. 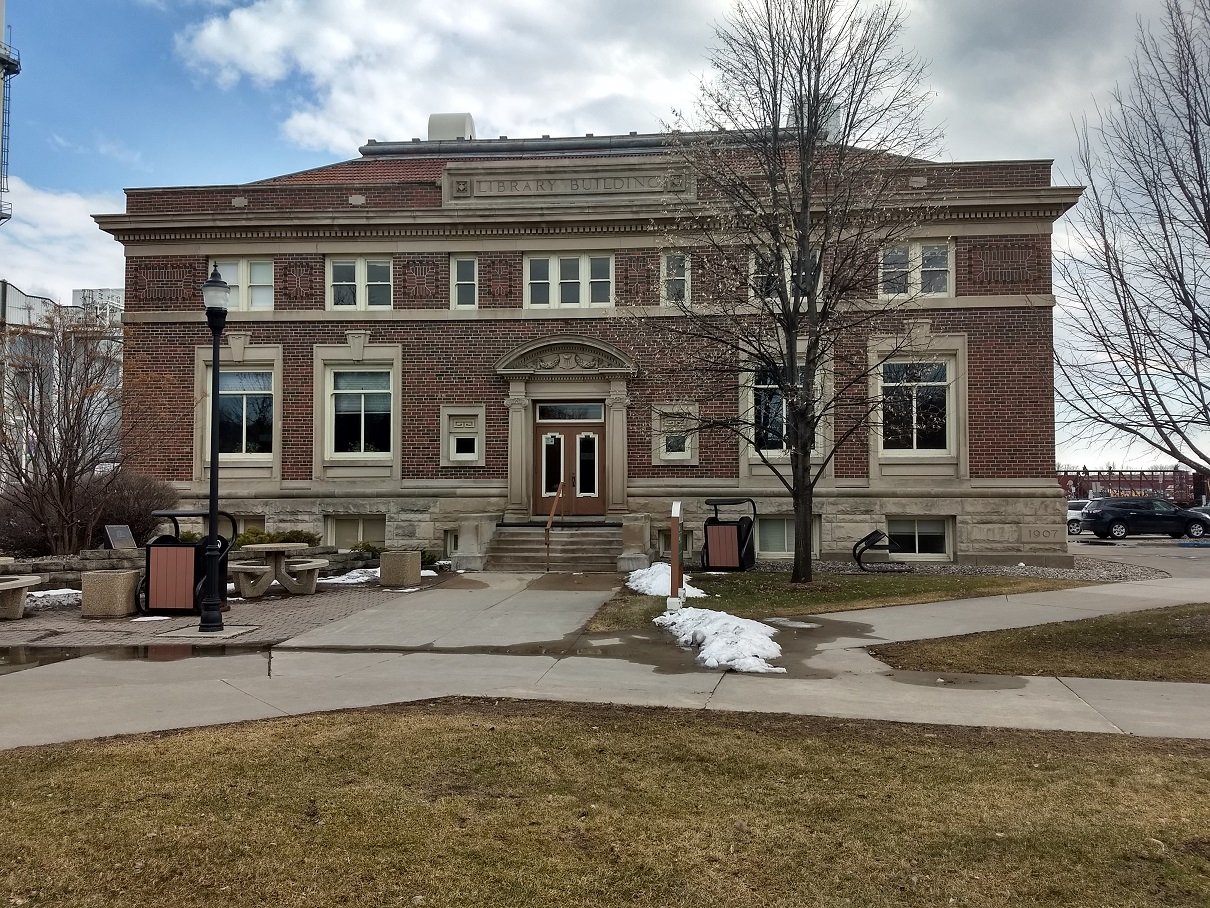 The front desk of the Carnegie Building in 1908 while it served as a library. 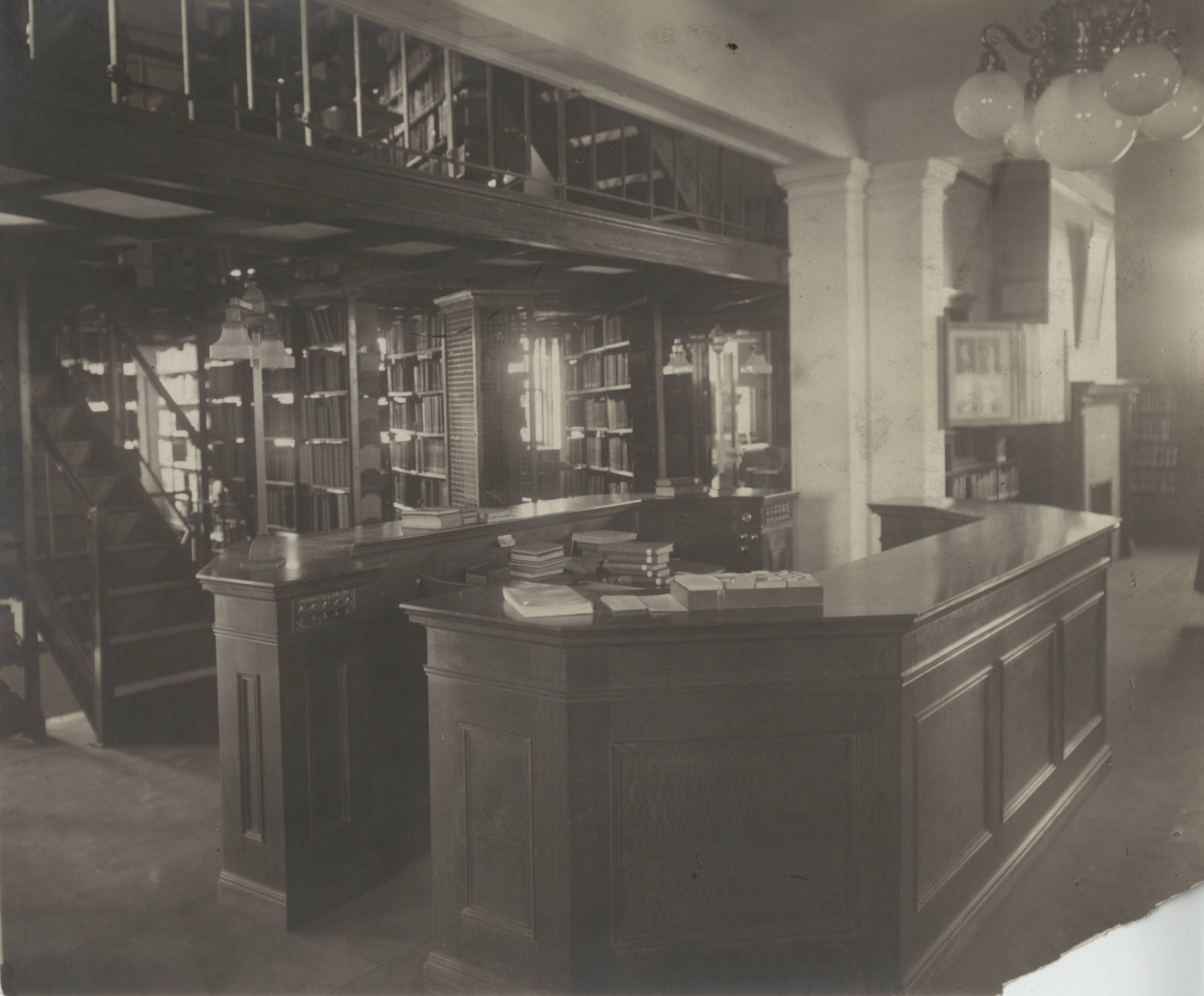 The front desk of the Carnegie Building in 2019 while it serves as an administrative office. 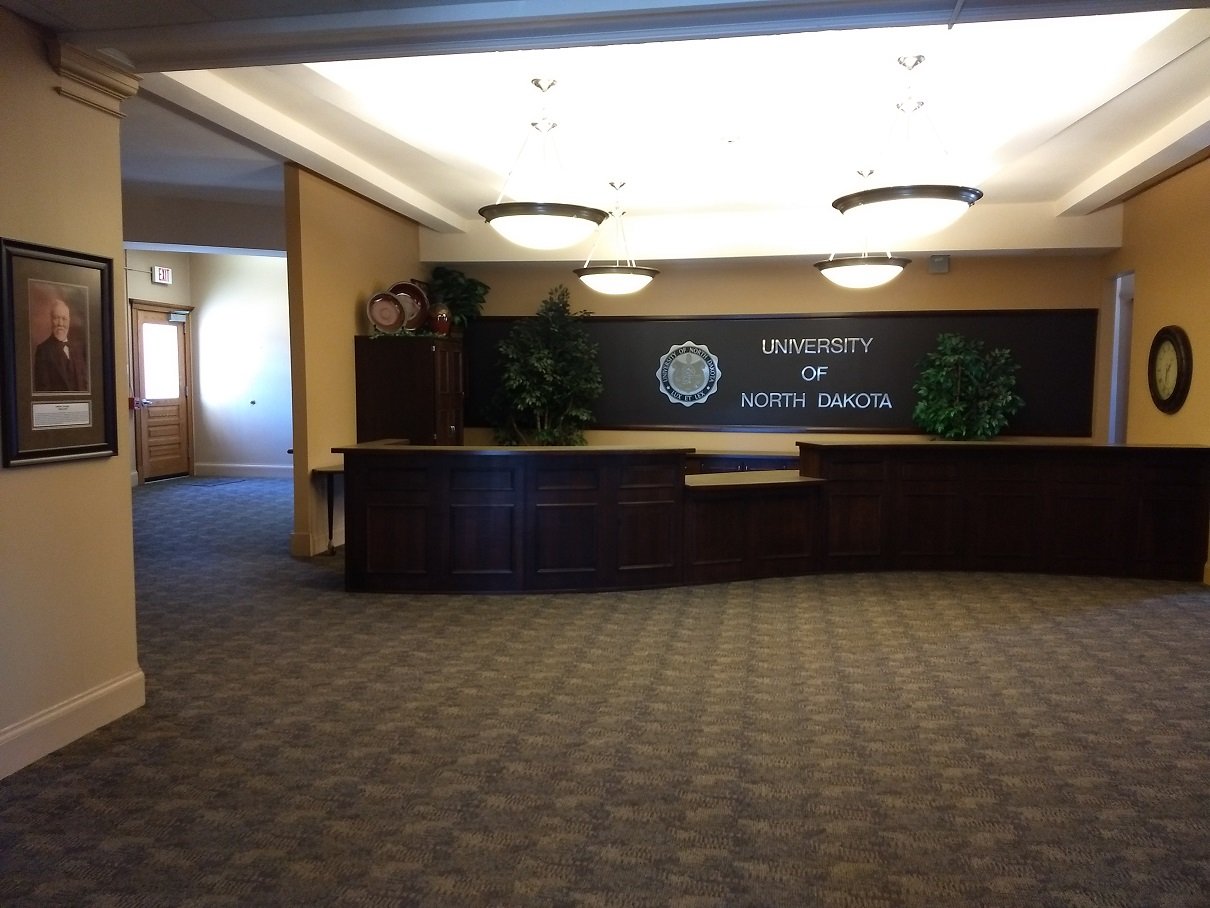 Ground was broken and the cornerstone laid in 1907. Patton & Miller were chosen as the architectural firm for their experience in building over 100 Carnegie Libraries across the country. Construction was completed in 1908 in a neoclassical architectural style which was popular at the time. The style was recommended by James Bertram, Andrew Carnegie's head secretary and manager of the Carnegie Foundation. These recommendations became requirements by 1911 as many Carnegie Libraries were being built in styles that Andrew Carnegie found unsuitable for housing a library collection. He leveraged his prestige and the promise of money to make sure that all future Carnegie libraries would be built in a similar style and layout. UND’s Carnegie library followed a somewhat different layout but was not too far removed from what became typical in the years after its construction. President Merrifield had chosen a grand style for this and many other buildings he planned on campus because he saw architecture as a means to improve the academic environment of the university, especially if the architecture was beautiful. Neoclassical architecture was meant to convey a sense of power, authority, and knowledge, suitable themes for an academic library. The main hall of the building was two stories with book stacks from floor to ceiling. The ceiling was topped by a skylight, still present today, though it has been boarded up and is no longer visible from the inside as is much of the original interior architecture, a result of the building's changing roles over time.

The Carnegie Building served as the University’s library until 1929 when it became clear that the building was too small to house the rapidly growing collection. At the same time the existing dining facilities were thought to have become too large. The University solved their two problems by switching the purpose of the buildings around. The Commons, the name for the dining hall, moved into the old library and the Library collection moved into the old commons. The names for the buildings switched places as well and so the Carnegie Building became known as the Commons on campus.

To house the dining facilities the first of two additions were made to the building in 1929. The first addition was to house a kitchen and freezers for the dining hall. The addition was a simple red brick square tacked onto the back of the building. Although the color of the brick was matched to that of the original building, no further effort was made to match the neoclassical style in the new addition. Economic hard times played a role in the decision for a simple addition, but Merrifield's master plan for campus had also been abandoned and the Carnegie Building was no longer central to the architectural vision of the campus. After the building was converted into the Commons it was mostly ignored by University officials and campus students alike, except when they would complain about the loss of quality fine dining.

A second addition was proposed in 1942 to expand the building further to accommodate the Home Economics department which was set to move in the next year. Like the first addition this new portion was constructed as a simple brick square, though this time not even the brick color was matched to the rest of the building. This would be the final exterior addition made to the Carnegie Building, though its interior would undergo several more remodels, each one cutting up and removing more of the original interior than the last. Today very little of the original interior remains. The building was made handicap accessible in 1993 with the addition of an elevator, though even this remodel was poorly executed. The door leading to the elevator from the outside is at ground level and does not connect to the rest of building interior, though the stairs are visible from this small room.

Starting in 1996 the building housed the Telecommunications department for a few years, then the Universities Enrollment office and finally the budget and internal auditing services.