Sitting in the waters of Mobile, Alabama, the “USS Drum” was a famed submarine used during World War II, and now sits, open for public display, as a part of Battleship Memorial Park. This was the first of the Gato-class submarines completed before World War II. It represents what was the standard design for American fleet submarines at the beginning of that war. “The Drum” was moved in 2001 onto land for permanent display, the project winning several engineering awards. “The USS Drum” sank fifteen Japanese ships and earned twelve battle stars. 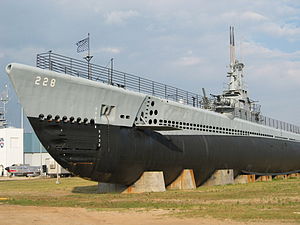 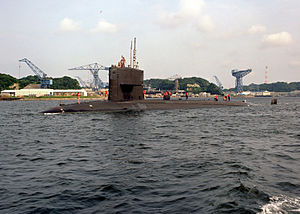 The “USS Drum” was laid down on September 11, 1940 but wasn't launched until May 12, 1941.  This powerful machine is a Gato-class submarine of the United States Navy. It got its name from the drum fish which can make a drumming sound. The submarine arrived first at Pearl Harbor on April 1942. She sank three cargo ships within the next two months and spent most of her time fighting during Pearl Harbor.

Her last battle was in progress as she was headed toward the west for another overhaul. The journey was cut short, however, because the Japanese surrendered in August. She continued to sail and ended up stopping in New Hampshire. “The Drum” received twelve battle stars for the service she gave during WWII. She sunk a total of fifteen ships in her time of duty.

“The Drum” currently resides in Mobile, Alabama at the Battleship Memorial Park. This museum for the submarine opened July 4, 1969. She was decommissioned in February 1946. From 1967-1969 she sat withan inactive fleet in Norfolk Virginia.

Nowadays, however, the “USS Drum” sits open to the public as it has joined as part of the larger Battleship Memorial Park, which displays a multitude of naval crafts. Tours are often done through the submarine throughout the summer, and guest are encouraged to ask about Stateside, the crew’s beloved pet dog from the war years.