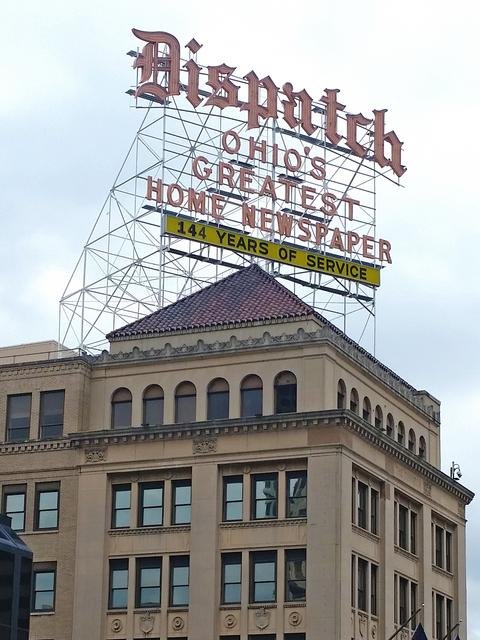 Known as The Daily Dispatch, the first issue of the paper was published on July 1, 1871. It had four pages, and it cost 3 cents. The entire organization cost $900 at the time. The paper’s first full-page ad was for the Columbus Buggy Co. on April 2, 1888. On December 17, 1899, the paper published its first Sunday paper. The price of a daily paper went down from 3 cents to 2 cents.

The papers first color comic was published on March 3, 1901. In 1905, Brothers Harry Preston Wolfe and Robert Frederick Wolfe purchased the Dispatch. The brothers owned a Columbus show company and had purchased the Ohio State Journal in 1903.

On December 16, 1906, the paper publishes the first color advertisement. On April 9, 1907, the building burnt down, and the newspaper worked out of another facility until 1910 when the Columbus Dispatch building was rebuilt. Larger printing presses were installed in 1909.

The organization used its electrograph to inform citizens during World War I about the most important news. A typewriter was connected to light bulbs on the sign above the building and spelled out messages.

In the 1930s to 1950s, subscribers of The Dispatch placed markers on their houses indicating to paperboys they were subscribed. After the assassination of President John F. Kennedy, the organization had telephone operators that assisted citizens when they called for more information.

In 1955, the paper began the “Cook’s Corner” recipe exchange that is still a favorite of readers today. On March 24, 1975, The Columbus Evening Dispatch changes its name to The Columbus Dispatch.

The paper published the first online newspaper on July 1, 1980. The news was transferred to home computers through CompuServe dial-up. Readers paid $5 an hour for this service. On January 1, 1986, the paper changed from an afternoon paper to a morning paper. They used an early bird mascot to mark the change. And in 1990, the paper opened a new production and printing building in Columbus, Ohio. The paper’s main offices remained at their main building. In June 1995, the paper launched its first website.

A notable contributor to the paper is cartoonist Billy Ireland’s “The Passing Show” was first published as a full-page on February 9, 1908. James Thurber, a Columbus native illustrator wrote for the paper, then known as The Columbus Evening Dispatch, from 1920 to 1924. His column was “Credos and Curios,” and he went on to write for The New Yorker magazine. Another notable contributor is Milton Caniff, who worked as an artist for the paper. He is well known for his “Steve Canyon” and “Terry and the Pirates” comics. Columnist Mike Harden wrote for the paper from 1983 until his death in 2010.

About the Dispatch. The Columbus Dispatch. Accessed April 16, 2019. https://www.dispatch.com/about-the-dispatch.