The Second Battle of Trenton Markers

In 1777, on the day of January second in Trenton, New Jersey this battle takes place between the American and British troops. American troops led by General George Washington are given the task to defend the bridge that crosses Assunpink River against General Charles Cornwallis and his British troops. Although outnumbered several small skirmishes before the battle for the bridge led to a British retreat. The next day the British advance to attack American forces while Washington advances a group to Princeton to attack a British base becoming one of his largest victories in the war.

A monument set in place with a brief summary of the heroics that took place during this battle. 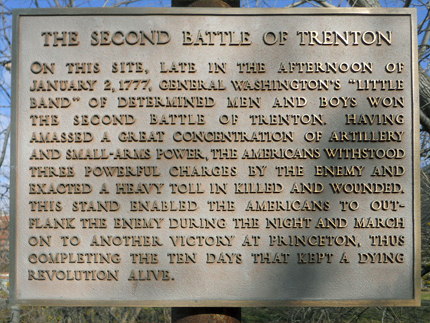 Mill Hill Park Monument with details on the battle that took place in the local surrounding area. 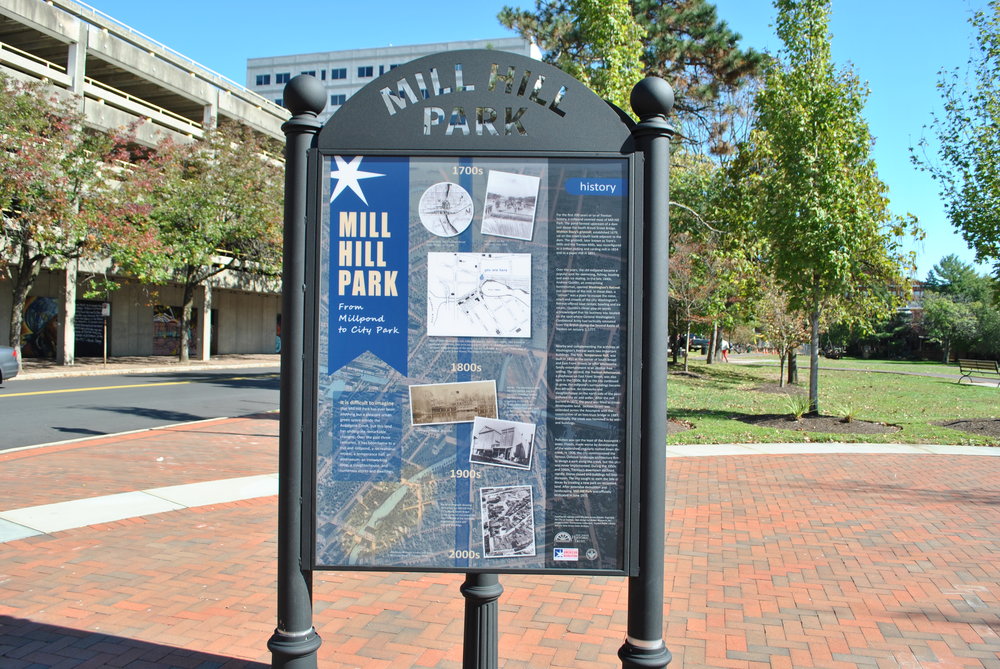 This marker commemorates the Second Battle of Trenton also know as the Battle of the Assunpink. This battle took place in Trenton, New Jersey on the date of January 2, 1777 in what is now known as Mill Hill Park. This park resides directly beside the Assunpink River thus providing the name "Battle of the Assunpink." This battle was one of few battles that helped swing the war in the favor of the American troops, both battles of Trenton proved to provide the American army with the confidence needed to finish off the British.
The important battle took place between roughly 6,000 American troops controlled by General George Washington and around 10,000 British and Hessian troops under control of General Charles Cornwallis. Another American who played a large role during this battle was Colonel Edward Hand. Edward led about 1,000 American troops farther south to Shabakunk Creek and Five Mile Run, here is where the Americans begin their attack. After a small skirmish here Colonel Hand's troops fell back to Stockton's Hollow for one last skirmish before falling back completely to the opposite side of the bridge that crosses the Assunpink River back onto American territory.
Prior to this battle Washington knew going into the mission that he was going to be outnumbered and that main goal was to defend the bridge against the British troops. Knowing this he gave his troops the best possible advantage to defend, by setting up on the northern side of the bridge looking down this gave the ultimate advantage to the American troops leading to a victory in the primary surge from the British. The initial encounter at Assunpink led to roughly 350 British troops dead, wounded or captured and only 50 American troops dead or wounded forcing Cornwallis to call off the attack and retreat back to safety. Cornwallis retreated to a high ground place known as Beakes farm to avoid any further attacks from the American Troops.
Judging from this encounter it is easy to say that Washington had won and his job was complete. Wrong. Preparations for the next morning began, while Cornwallis prepared his troops for round two at Assunpink, Washington was planning an attack on a British base in Princeton. The morning comes and as Cornwallis approaches Assunpink heavily outnumbering the American artillery that stayed to defend the bridge Washington takes a sawmill road on his journey to Princeton. Washington would win this battle in Princeton.
Washington's success in the second Battle of Trenton and the Battle of Princeton were his first big victories in the war. These victories also opened up an opportunity for the Americans to swing the war in their favor and begin the ending moments of the war.