In the fall of 1861 three Confederate regiments attempted to make and hold camp in the Blue Sulfur Springs area of West Virginia. But as the fall pressed into a cold and rainy season, the troops, and their medics, soon became deathly ill from the lack of provisions made and their poor leadership. However not all died at the same time so some men were able to fight in and around areas of Blue Sulfur Springs. This marker signifies the men who died in unmarked graves at this camp. 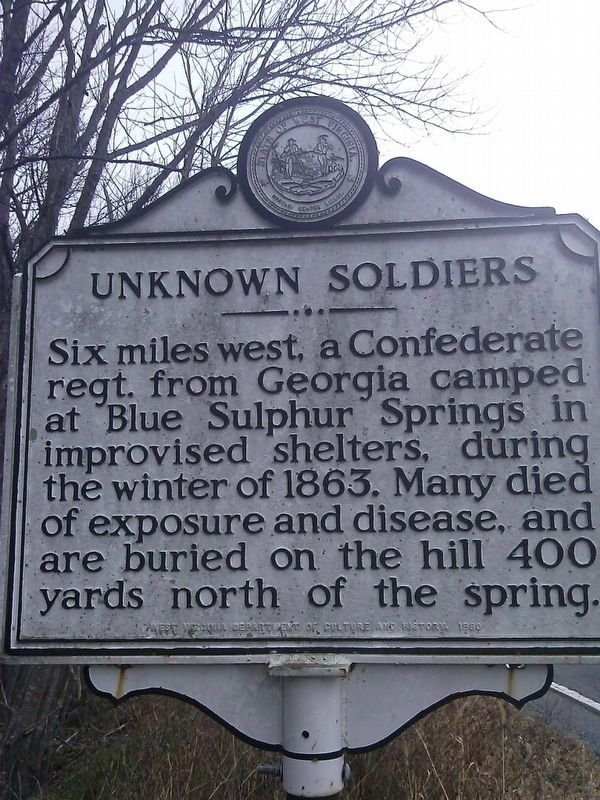 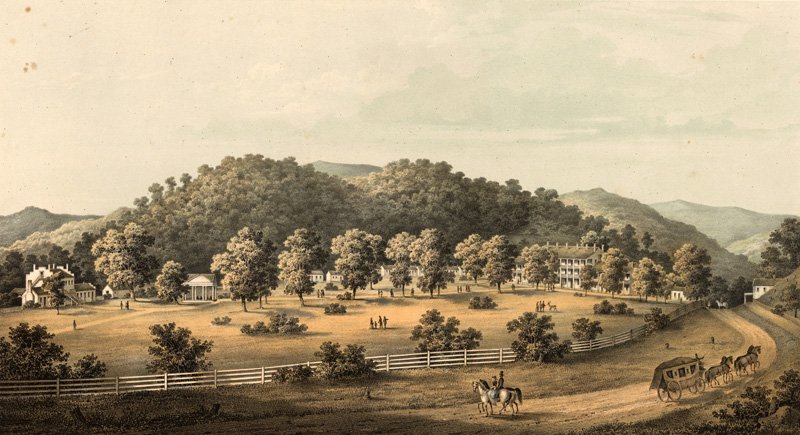 In the Fall of 1861, a large combination of Confederate Forces to include the 13th Georgia Infantry Regiment, the 24th North Carolina Infantry Regiment, and the 50th Virginia Infantry Regiment, made camp in the mountains of Blue Sulfur Springs West Virginia. The Regiments camped in this area from September of 1861 to December of 1861 by using improvised shelters, but these men soon came to realize that their shelters would not aid them in their encampment. Not long after they had made camp a cold rainy fall, came over the mountains which would make the soldiers more susceptible to disease. Not only did most of the main fighting force become ill, the Regiments medical providers also became sick which left those who could fight at an extreme disadvantage. Because if they were severely injured in battle or became sick themselves, they were out of luck.

There were some who were able enough to fight near Mt. Sewell, named after Stephen Sewell, a pioneer who was killed by Native Americans, is one of the highest mountains in southern West Virginia and it’s crossing was along the highest point on the Midland Trail. But there were the bulk of the forces that died of typhoid fever, pneumonia, measles, and possibly other different types of viruses and diseases around the former Hospital at the former Blue Sulfur Spring Resort and Alleghany Institute campus, which were closed to accommodate for the war and the encampment. The Resort was built in 1834 as a mineral spa and was built to shelter the sulfur spring at the resort.

The Blue Sulfur Spring resort began to decline in the 1850’s from competition from other resorts such as The Greenbrier and a decline in the economy, most likely from the war. As the resort was closed in 1859, the property returned as the Alleghany College, a school for Baptist Ministers but was soon closed in 1861. The buildings on the property were used by both sides of the Civil War as both a camp and hospital. In 1864 the North destroyed the resort the prevent the Confederates from ever using the structures again.

The tabloids caught wind of the deplorable living conditions that the men had to endure and suspected incapable leadership that the men were following. Which surprisingly lead to the withdrawal of the forces in December if 1861 to the VA in Petersburg Virginia. The men were sent there not only be treated and to recover, but also to be provisioned and prepare for the battles to come in Gettysburg and Virginia.

The cemetery has no deed no access roads or gates, no parking or anyone to maintain the grounds, only another monument to the deeds of those who are only noticed and remembered by passerby’s who take the time to stop and take recognition.