The Frazee house is a great example of the kind of vernacular, Dutch-influenced architecture, seen in this region of New Jersey in the early 18th century. The house was constructed between 1720-1740 by Gershom Frazee, a local carpenter and joiner. His wife Elizabeth (or as she has come to be known, "Aunt Betty") has become incredibly prolific in local history due to a legend regarding her conduct during the American Revolution. (Read on for more on that!) The house remained occupied until the 1990s, at one time being operated as New Jersey's largest, privately-owned zoo. Eventually the property was acquired by the Township of Scotch Plains, and through the heavy involvement of the Scotch Plains-Fanwood Rotary Club restoration efforts are currently ongoing. The house remains intact, though still very much endangered due to weather, insect, and water damage.

The house as it has appeared from 2014 to the present.

A very early photograph of the house ca. 1880. Notice the absence of the enclosed porch, added later in the 20th century. 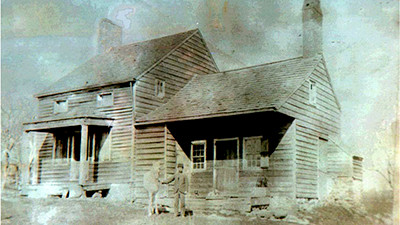 The west side of the building with a view of the grounds. 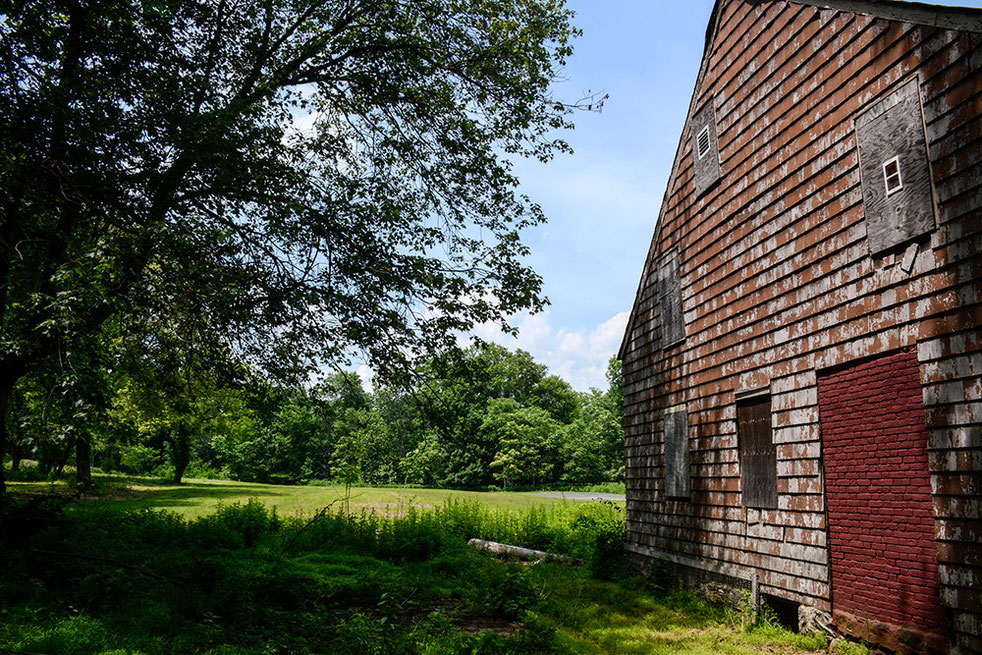 The metal reinforcements helping to stabilize the structure. This photograph was taken on the main level. 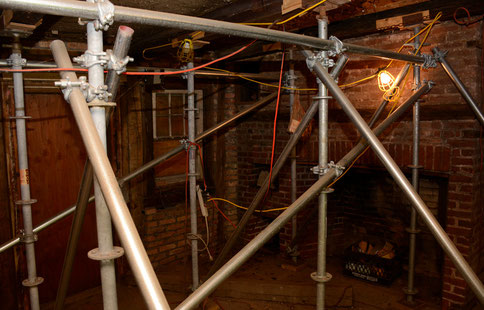 The Frazee House, located just off the intersection of Terrill and Raritan Roads in Scotch Plains, New Jersey, is an early 18th century home built in a Dutch-Colonial architectural style. The home is renowned in local history due to a legend regarding one of the home’s original inhabitants, Elizabeth Frazee. As the legend goes, during the battle of the Short Hills on June 26th, 1777, British troops under the command of Cornwallis were pursuing American forces retreating towards the Watchung mountains. As British troops crossed the Frazee property, they smelled the fresh bread that Elizabeth was baking. This caught the attention of Cornwallis, who asked Elizabeth for bread for himself and his men. She reportedly responded to him saying, “I give this bread through fear, not in love.” Upon hearing this, and impressed by her courage, he refused the bread and ordered that none of his men should touch a single loaf. It is largely due to this legend and the house’s association with the battle of the Short Hills that has made the site such a fixture in local history.

The more legendary elements of the home’s history aside, the site is still a wealth of information regarding everyday life in the 18th century and beyond, as well as a great example of early American (particularly Dutch) architecture. The house was built circa 1720-1740 by Gershom Frazee, who would marry Elizabeth Lee, the famous “Aunt Betty” who figures into the legend. Gershom was a local carpenter and joiner who built houses and furniture in vernacular styles, which tended towards a Dutch influence in this region. The house is an example of this Dutch style, with its low profile and cantilevered roof. Additionally, the framing of the house is done with heavier beams and plank floors, rather than the lighter English style which makes use of a ‘summer beam’ and lighter joists. Elizabeth, “Aunt Betty,” likely was a bread baker, as a 1791 inventory of the Frazee’s goods does list 3 flour casks, 3 dough troughs, and a chest for bread. Gershom and Elizabeth likely had two children of their own, and also raised their nephew, Gershom Lee.

The American Revolution would take a heavy toll on the Frazee property. It is likely that the Frazee’s aided and fed militia commanded by Captain Littell as early as February of 1777, and that British troops did move across the property and cause damage during the battle of the Short Hills in June of 1777. This damage is indicated in damage claims that were filed by Gershom after the war, wherein he lists over 64 woodworking tools, a hive of bees, household goods, 3 cows, and 23 sheep, as being lost to the British. He also makes mention of garden fencing and other fences that were burnt. These damage claims, combined with the inventories of goods that were owned by the Frazees, do provide some support to the legendary encounter that took place between Cornwallis and Aunt Betty. The earliest source listing the encounter between Elizabeth and Cornwallis is The History of Union County by F.W. Ricord, published in 1892. Looking at the actual history of the property related to the war, it would at least seem that some of the major elements needed to support an encounter, such as that described in the legend, were present.

After the death of Gershom and Elizabeth, the property was owned and operated by their grandnephews for over sixty years, before being sold in 1893 to the Ryno family, who continued to farm the land until 1949. The property was then sold to Franklyn Tuttle Terry and his wife Ella Louise Terry, who used the property as a zoo. Known as the Terry-Lou Acres Zoo, this was the largest privately owned zoo in the state of New Jersey. Eventually, after the use of the property as a zoo had ceased by 1997, the Township of Scotch Plains was able to acquire the property through eminent domain by 2000. The material elements of the zoo were subsequently demolished.

The Frazee house today remains highly endangered. The house has often been placed on lists of most endangered places at both the county and state levels. The Scotch Plains-Fanwood Rotary club has taken over the project of the stabilization and restoration of the property, with the hope of using it for education and community purposes. Structural problems were mitigated by the installment of metal supports and scaffolding inside the house, but there remains a problem with water leaking into the basement and causing damage. The desire of the organization is to restore the house to its period of significance, which is from about 1761 to 1815. This requires the removal of various 19th and 20th century elements that were added later (like an enclosed porch on the front of the house), and other structural elements that have been weakened by termite damage. The hope is eventually to turn the property into an open historic house museum and community meeting space, and also to turn surrounding grounds into open park space that can be used for recreation and educational programming.

To find more information about the Frazee house, and to contribute donations towards the restoration, please visit the official website at https://www.frazeehouse.org.