This historical marker offers a summary of Yorktown's role as a Union garrison during the 1862 Penninsula Campaign. The Siege of Yorktown was an almost month-long affair that resulted in the Union securing control of this area as a port and supply depot, something that was critical to the failed attempt to use the Union's larger navy to support an advance towards Richmond in 1862. Rather than a land assault from Washington south towards Richmond, the capital of the Confederacy, General George Mcclellan hoped to land his army south of Richmond and push northwest to the Confederate stronghold. This plan would have many advantages, including the option to support his men with gunships and supply vessels along the James and York Rivers, but McClellan failed to press his advantages. Securing a supply depot at this location took longer than McClellan anticipated which was part of the reason why he decided against a full assault. An estimated 482 men lost their lives in this battle of the Peninsula Campaign: 182 from the McClellan-led Federal forces and 300 from the Confederacy under Joseph E. Johnston's command. The siege came to a close when the Confederate forces abandoned the area and retreat towards Williamsburg, but McClellan failed to continue to press the offensive partly because he overestimated the size and capabilities of the Confederate armies in eastern Virginia at that time.

Marker within the Yorktown limits about the siege is quite informative to those wishing to know more about Yorktown's involvement in the Civil War. (Photo by Bill Coughlin on the Historical Marker Database website) 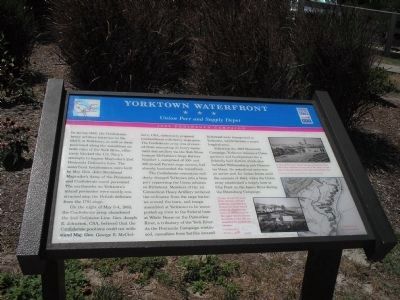 13" Mortars used by the Union aimed towards the Confederate line show the literally gigantic firepower used during the battle. (Photo from the Visiting Yorktown website) 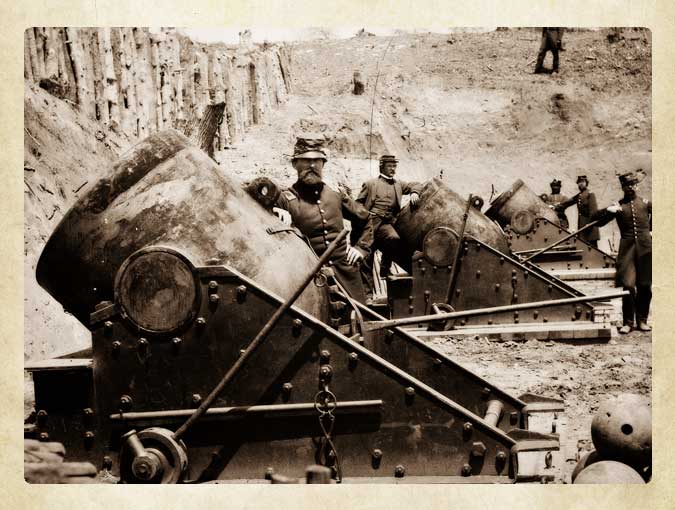 Union soldiers loading cannon balls for shippment from Yorktown to another location within Virginia. (Photo from the Historical Marker Database website)

President Abraham Lincoln was considering the notion of launching an attack on Richmond from the outskirts of Washington, D.C. when Major General George B. McClellan suggested using the peninsula formed by the York and James Rivers. Unbeknownst to both men, the Confederacy was anticipating such a strategy and began fortifying and strengthening the lines along the peninsula under the command of Major General John B. Magruder. While General Robert E. Lee, military advisor to Confederate President Jefferson Davis, was thinking of reinforcing the 11,000 men Magruder had, General Joseph E. Johnston suggested the line be abandoned in favor of concentrating Magruder's forces into a better defense of Richmond. The Army of the Peninsula was then added to the Army of Northern Virginia with Johnston in command while Magruder was given control of a portion of Johnston's men.

When McClellan heard that there was a smaller force fortifying the area around Yorktown, he turned away from Richmond in favor of taking on the Rebels in that region. Unfortunately for the Confederates, Johnston and most of his army was not on the peninsula when McClellan reached them, leaving Magruder and two small divisions to fight against the Yankees. Fortunately, for Magruder, he used theatrics to persuade McClellan and his troops there was a much larger army occupying Yorktown. McClellan then insisted on building siege fortifications to hopefully take on this supposedly large group of forces.

While the Union batteries were continuously firing upon Yorktown, there was only one that actually fired upon Confederate forces. Johnston, however, always knew that he would have the troops leave Yorktown, and began this procedure on the night of May 3 by ceasing all diverting fire from his heavy guns. The following morning, McClellan and the Union soldiers discovered that Yorktown was deserted by the Confederates, leaving behind weaponry that would aid them in future battles, such as the newly discovered land mines.

Seizing these weapons would prove to be a great benefit to the Union as they would go on to ultimately win the Civil War three years later. At the time of the conflict, there had never been such a humongous amount of artillery used in the world. McClellan eventually left the Yorktown Peninsula in August 1862 leaving behind some units to keep control of Yorktown through the end of the war when Major General Ulysses S. Grant requested that Yorktown be abandoned at the beginning of the siege of Petersburg.