Samuel Woodfill was a veteran of World War I and is the most decorated American soldier from the war. He received the Medal of Honor as well as different rewards from different European nations. He met with Presidents, received ovations from Congress, and was chosen to represent the Army infantry at the burial of the Unknown Soldier. He is considered Indiana's greatest hero to this day.

Samuel Woodfill was born in Belleview, Indiana in 1883. His father fought in the Mexican War as well as the Civil War with the Indiana volunteers. Samuel kept his father's legacy and joined the Army in 1901. He served in many different stations before World War I, including the Philippines, Alaska, Kentucky, and the Mexican border.

After he was promoted to Lieutenant, he was deployed to Europe in April 1918 as part of the 60th Infantry, Fifth Division. He was sent to the Meuse-Argonne front where he would be a part of some of the final offensives by the Allies, and the main engagements of the war involving the American Expeditionary Forces. It would begin in September, 1918 and last until November.

On October 12, near Cunel, France, his company came under fire from a machine nest.
Woodfill charged the nest alone aside from two soldiers who followed twenty feet behind him. He engaged the first nest, killing three of the four machine gun operators before the third charged him. After hand-to-hand combat ensued, he killed the final one with his side arm. After his company advanced they came under fire from a second nest. Woodfill again engaged the nest alone killing several members and taking three captive. They encountered a third machine gun nest which he again charged, killing five of the enemy. He engaged a fourth nest with his sidearm, which failed to kill to two machine gun operators, so he grabbed a trench-pick and effectively eliminated the final nest. After the assault, Woodfill was exhausted along with dealing with exposure to mustard gas and a piece of shrapnel that was stuck in his leg from the last machine gun nest fight. He claimed, "It was not much of a wound, but they sent me to the rear." He spent the rest of the war in Bordeaux, hospitalized.

His actions awarded him the Medal of Honor, which he received on February 9, 1919, in Chaumont, France. He also received the Croix de Guerre with palm by the French government. The French also made him a Chevalier of the Legion of Honor. Italy rewarded him with the Meriot di Guerra, and Montenegro presented him with the Cross of Prince Danilo. Woodfill was also promoted to Captain for his efforts.

Samuel's military term would end soon after he sailed home in 1919. He reenlisted soon after, but lost his rank of Captain. Many tried to petition to Congress to let him retire from the military as a sergeant, but with a Captain's pension. This led to no avail, and Samuel found it hard to support his family on a sergeant's salary. In 1922, he received leave from the Army to work on a dam project on the Ohio River. The pay was roughly double his sergeant's pay and helped support his family. The Keith Theatre Interests in New York City, after seeing a picture of Samuel working at the dam, gave him $10,000 to pay off his mortgage and helped pay for some life insurance. Samuel was extremely grateful to the Keith Theatre Interests, "who made possible the freeing of our home from debt."

After the war, Samuel would become somewhat of a celebrity, even though he hated the fame. General Pershing said that he was one of the most outstanding soldiers of the war. The General then chose him to represent the Army at the burial of the Unknown Soldier. When he met President Warren Harding, the President recalled that, "When he shook hands with me he had the grip of fighting man." Samuel was frustrated with the publicity. He felt as if he was a "circus pony" and he was called to "perform" whenever something was happening. He met and was photographed with President Coolidge, and received many more honors locally, including a school at Fort Thomas named after him. He was often remarked about his humility, even though he wished that, "there won't be any more written about Woodfill."

In 1923, Woodfill was discharged from the military with full honors and the rank of master sergeant. After a failed attempt at starting an orchard in Kentucky he worked as watchman until the start of World War 2. In 1942, Woodfill was enlisted as a major in the Army and worked as an instructor in Birmingham, Alabama. The strategy behind his enlistment was to inspire the younger soldiers with heroes like Samuel Woodfill. When he finally retired from the United States Army, he lived alone in his house near Vevay, Indiana. On August 13, 1951, he was found dead in his home. He supposedly died a couple earlier to a heart attack. He was first buried in Hebron Cemetary in Jefferson County, Indiana. A couple years later his body was moved to Arlington National Cemetery with honors. A memorial was erected in his honor in Springdale Cemetery in Madison, Indiana. 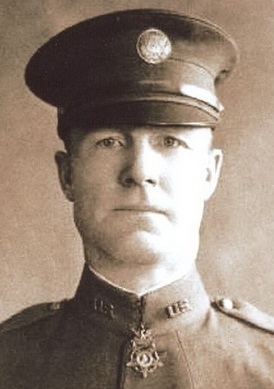 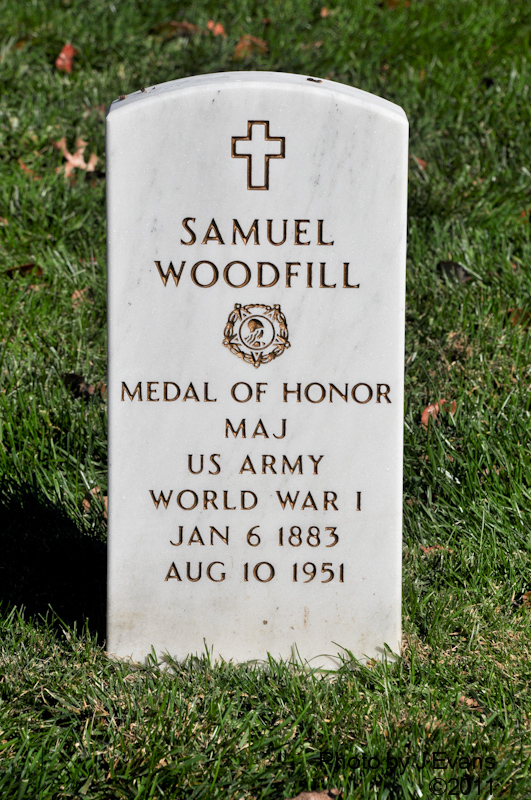 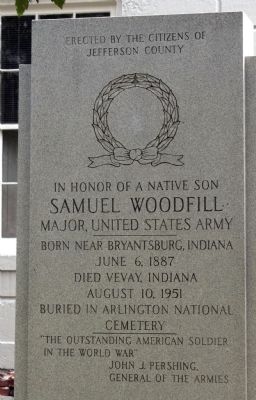