Dedicated in 1953, this monument commemorates the 1780 Battle of Piqua. The monument is located in what is now George Rogers Clark Park but at the time of the battle, it was the site of the Shawnee Indian Village of Piqua. The Shawnees and their British Allies were defeated by General George Rogers Clark with his army of Kentucky Frontiersmen, securing this part of the western frontier for the American rebels during the Revolutionary War. 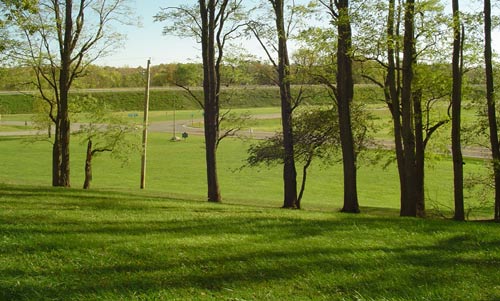 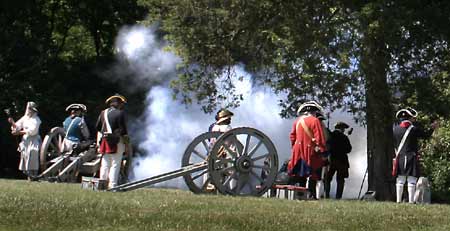 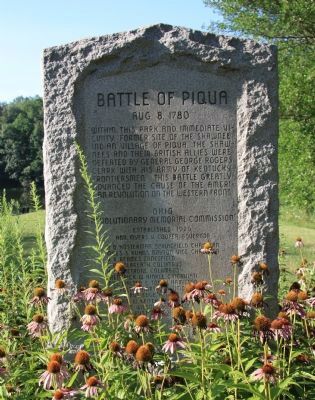 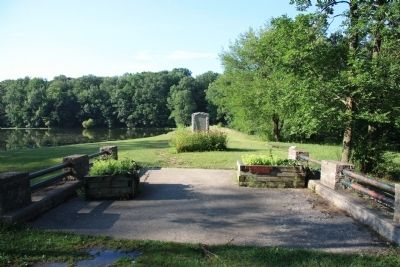 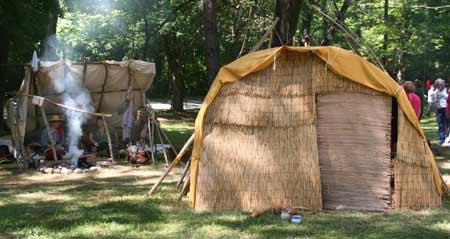 The Shawnee had settled the village of Piqua near the Mad River in 1754. The village supported over 4000 people and had over 800 acres of corn.

To assist the natives the British built a triangular stockade as well as making improvements in other village fortifications. With this massive food base and British support, war parties were free to attack American forts and settlements in Kentucky causing an uproar from the American colonists. In June of 1780 a combined Shawnee and British army attacked and took possession of Fort Liberty and Martins Station.

These raids into American controlled territory had to be stopped. Colonel George Rodgers Clark was intent to counterattack the Shawnee to end their constant threat to American settlers who were migrating into the area. On July 31 over 1000 men arrived with General Clark at the mouth of the Licking River in Kentucky, two soon to be famous men among them were Daniel Boone and Simon Kenton.

Colonel Clark’s plan was to push past the river and capture a base of supply. The Militia would then move north destroying the Shawnee raider's fortifications in Chillicothe and Piqua. The Natives however were planning to stand and fight at Piqua. The militia was split into three forces and moved on the Natives positions. The natives were routed in a short time.

With the natives no longer there to defend Piqua the Militia completely burned the corn fields, and destroyed the settlement before returning home. After the battle, the Shawnee moved northward and would settle in what is today Piqua, Ohio. The Battle of Piqua was the largest military engagement of the Revolutionary War west of the Allegheny Mountains.