Located on Thompson Road less than a mile from the Mason-Dixon Line in Needmore, Pennsylvania, Tonoloway Primitive Baptist Church is the oldest church in Fulton County, Pennsylvania and the tenth oldest Baptist church in the United States. Construction began on the current brick structure in 1829, almost fifty years after the congregation’s original establishment in the area. Prior to that time, congregants met in an 18’x22’ log building built in 1752. The congregation’s first minister during that period was the Reverend Joseph Powell, a delegate to the Pennsylvania Constitutional Conventions from Bedford County in 1777 and 1790, as well as to the Pennsylvania Ratifying Convention of 1787. Powell’s gravesite is located in the church’s cemetery nearby. The building is also notable for its use by Federal troops as a hospital after the January 1862 Battle of Hancock, and the signatures of wounded Union soldiers can still be seen on the walls of the church’s interior. By the mid-twentieth century, the church had fallen into disuse and the building itself had fallen into disrepair. So, in 1979, after the organization of the Friends of Tonoloway Church, fundraising began for the site’s restoration, which began over a decade later in the 1990s. Church services are currently held on two occasions every spring and fall, once on the third Sunday of May and again on the first Sunday in October.

View of the eastern side of Tonoloway Church, which faces what is now Thompson Road and is obscured from roadside by trees. Courtesy of The Record Herald of Waynesboro, Pennsylvania. 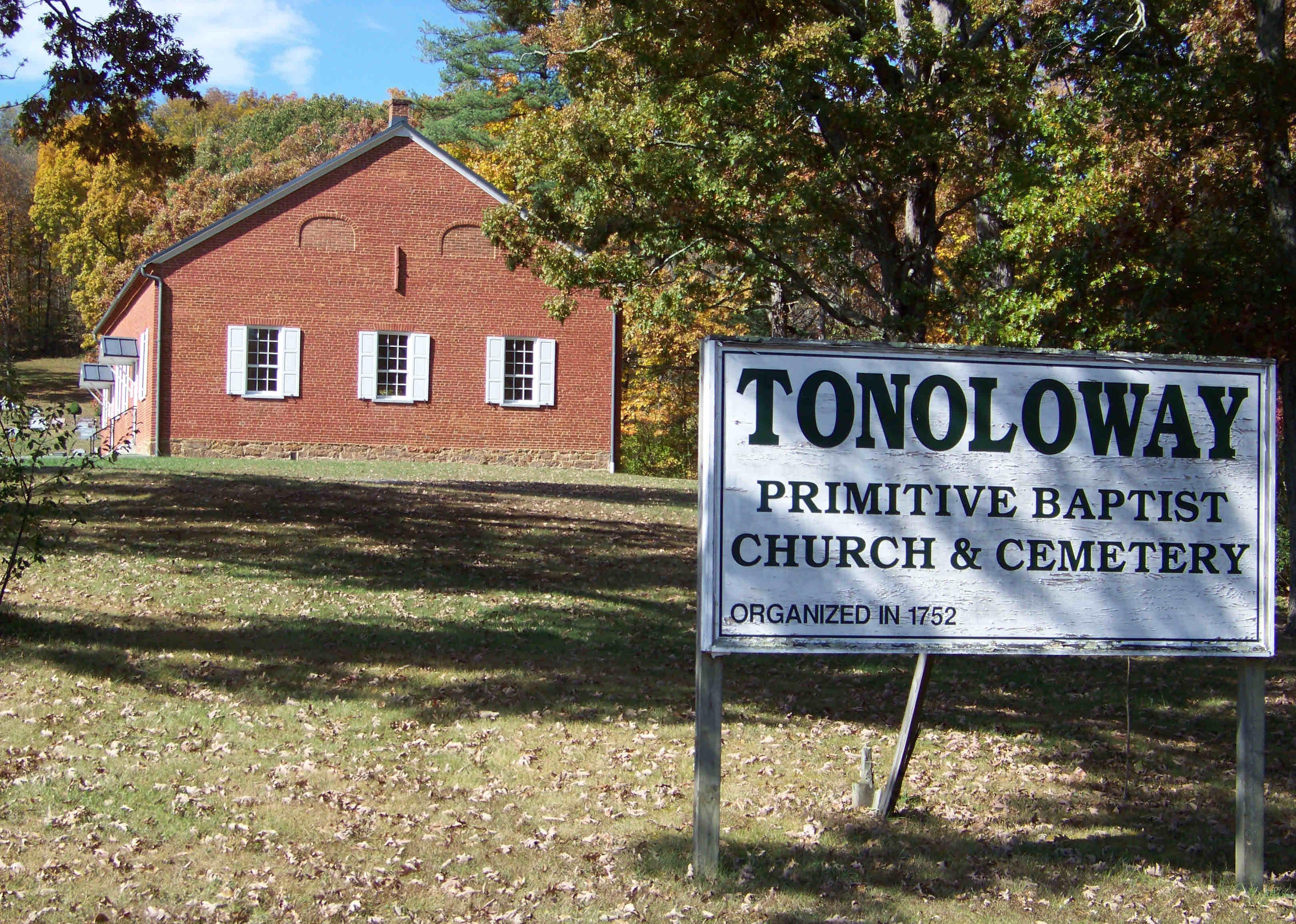 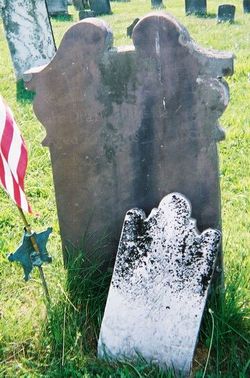 Tonoloway Church earned its moniker from indeterminate but most likely indigenous sources, and originally shared its name with the nearby community of Tonoloway (now Hancock, Maryland) that the church was intended to service. After the surveying of the Mason-Dixon Line between 1763 and 1767, however, the building officially came to stand on land claimed by the state of Pennsylvania. Four years after the completion of the Mason-Dixon survey, Tonoloway Church and the surrounding area became a part of Bedford County. The church’s minister, Joseph Powell, quickly rose to prominence in the county, and was elected to represent it at the Pennsylvania Constitutional Conventions of 1777 and 1790, as well as the Pennsylvania Ratifying Convention for the new federal constitution in 1787. Upon his death in 1804, Powell was interred in the adjacent cemetery. The congregants that remained after his passing continued to worship in the log building in which Powell preached for another twenty-five years. They began construction on the building that now stands at the location of the original church in 1829, completing it six years later with the addition of new pews. It was that building that served as a hospital for Federal wounded after the January 1862 Battle of Hancock, during which time a number of Union soldiers left signatures on the interior walls that can still be seen today. After the war, the church remained in operation for nearly a century longer, though the congregation steadily dwindled over the course of the period. By the mid-twentieth century the building stood vacant and in disrepair and remained so until the organization of the Friends of Tonoloway Church, who successfully completed the building’s renovation in the 1990s. Since that time, the Friends of Tonoloway have opened the church for annual religious services every spring and fall.[1]

European settlement to the area around Tonoloway Church began in earnest in the 1730s, primarily at the confluence of the Greater Tonoloway Creek and Potomac River just a few miles south in what is now Hancock, Maryland. Many of the settlers that arrived to the region during this time period were (just as in many such locations on the colonial borderlands) beginning to embrace the evangelical tenets of the Great Awakening ushered forth by the revivalist minister George Whitefield’s tour of Britain’s North American colonies from 1738 to 1740. So, within a decade of those settlers’ arrival the evangelical fervor in the area had evidently grown sufficiently to warrant the construction of a permanent house of worship for the region’s Baptists. Tonoloway Church was the result, and its congregation’s members hailed from not only from the nearby Tonoloway settlement but from settlements as distant as Sideling Hill fifteen miles to the west.[2]

Tonoloway Church’s congregants selected the Reverend Joseph Powell as their first minister. Born in Pennepek, Pennsylvania in 1734 and classically educated at the Hopewell Academy in New Jersey (North America’s first Baptist secondary school), Powell enjoyed considerable influence in the community, which elected him to serve as one of its representatives in various political proceedings multiple times over the course of his life. In 1777, at the age of forty-three, Powell acted to serve as a delegate for Bedford County at the first Pennsylvania Constitutional Convention, which crafted a new government for the state that modern historians have characterized as one of the most democratic governing documents of the era.[3] It is perhaps not too surprising, then, that Powell opposed the adoption of the federal constitution in 1787, which many anti-federalists considered an instrument of executive overreach that did little to guarantee the rights of American citizens.[4] His signature appears on an address to the citizens of Pennsylvania published by the anti-federalist delegates to the convention after the federal constitution had been successfully ratified, a document that was widely circulated at the time and became a sort of official statement of grievances for anti-federalists throughout the new nation.[5]

Eventually, in the wake of the Pennsylvania Constitutional Convention of 1790, Powell withdrew from public life to focus on his duties as a minister to the congregation of Tonoloway Church, a position he retained until his death in 1804.[6] Church attendance remained steady in the following decades and life in the area largely uneventful, a fact that allowed the congregation to fund and complete the construction of the brick structure that currently stands at the site of the original church. The new building took six years to complete (1829-1835), was approximately twice as large as the original, and could, according to a claim made by the congregation for damages incurred by Federal troops during the American Civil War, accommodate up to 1,000 people.[7]

The damages for which that claim was filed originated with Confederate General Stonewall Jackson’s attempt to cross the Potomac River in the January 1862 Battle of Hancock, an event that firmly placed the burden of national conflict on the congregation’s shoulders. After Jackson withdrew from his position on the southern side of the Potomac and retreated toward what is now Romney, West Virginia, a portion of the Federal soldiers wounded during his bombardment of Hancock were housed at Tonoloway Church. As the war progressed, Union forces continued to utilize the site as a hospital for soldiers suffering from contagious disease. The signatures of some of these men can be seen on the walls of the church’s interior, revealed during the building’s renovation in the 1990s.

Visitors to Tonoloway Primitive Baptist Church and its adjacent cemetery can catch a glimpse not only into the impact of national events on the daily lives of local citizens, but into the pivotal role borderlands areas like the one in which Tonoloway stands played in the formation of the United States. The congregation members of Tonoloway Church were actively involved in the most prominent issues of their day and did much to influence them. The history of the building they constructed is a testament to that fact.

[4] Jonathan Elliot, ed., The Debates, Resolutions, and Other Proceedings in Convention on the Adoption of the Federal Constitution as Recommended by the General Convention at Philadelphia, on the 17th of September, 1787(Washington: Published by the Editor, 1827).

[5] "The Address and Reasons of Dissent of the Minority of the Convention of Pennsylvania to Their Constituents," Constitution Society, December 12, 1787, , accessed April 10, 2019, http://www.constitution.org/afp/pennmi00.htm.

Elliot, Jonathan, ed. The Debates, Resolutions, and Other Proceedings in Convention on the Adoption of the Federal Constitution as Recommended by the General Convention at Philadelphia, on the 17th of September, 1787. Washington: Published by the Editor, 1827.

"The Address and Reasons of Dissent of the Minority of the Convention of Pennsylvania to Their Constituents." Constitution Society. December 12, 1787. Accessed April 10, 2019. http://www.constitution.org/afp/pennmi00.htm.