Completed in 1878 between Syracuse's Water Street and Erie Blvd, the Amos Block stands as a testament to the impact of the Erie Canal long after its completion in 1825. Built as a warehouse and retail center, Amos Block was built by its namesake, Jacob Amos, who served as Syracuse mayor from 1892-1896. At that time the Erie Canal brought barges and ships directly behind the building which allowed goods to easily be loaded and unloaded. In 2006, renovations to the building allowed for its transformation into an apartment complex.

This artist depiction (date unknown) shows the Erie Canal in the center with the Amos Building to its right. The building used to sit along the banks of the Erie Canal, but that is now Erie Blvd. 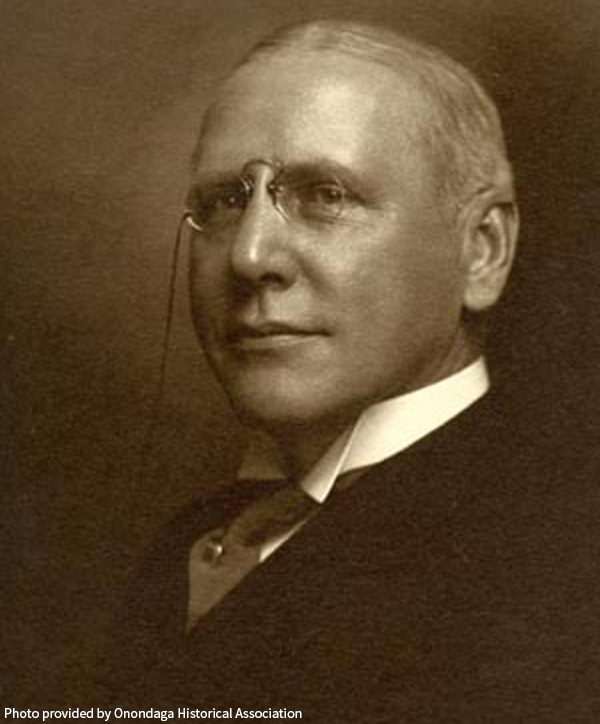 Amos Block (or "The Amos" as it known today) 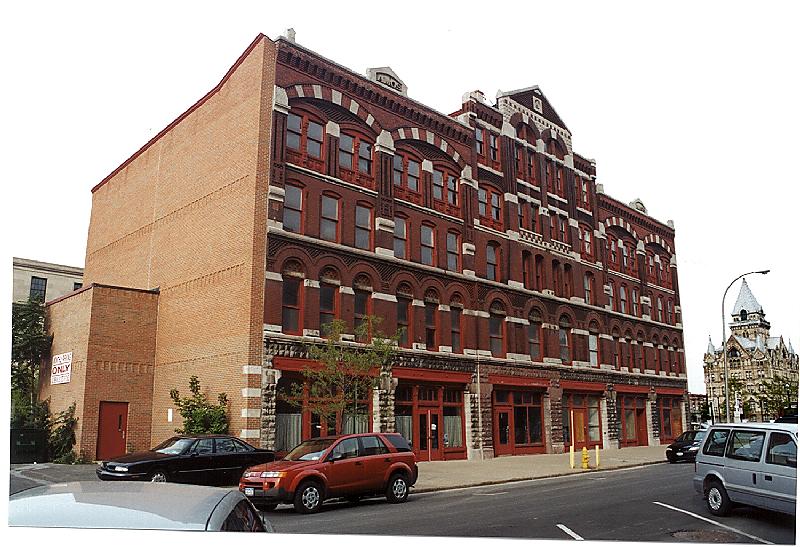 The eventual mayor of Syracuse (1892 - 96), Jacob Amos, built Amos Block in 1878. The Romanesque Revival style building stood on the banks of the Erie Canal as it flowed directly behind Amos during that time (where Erie Blvd now runs). Canal boats parked at Amos Block and could easily load and unload goods into the building  -- a wholesale grocery store and retail center.  Much like Syracuse itself, the building serves as a reminder of the impact the Erie Canal on the economy, culture, and environment; The structure once stood amidst a row of buildings situated along the banks of the Erie Canal (now Erie Blvd). And, as the canal has both moved and transitioned into a recreational waterway, the building underwent a renovation in 2006 and now exists as an apartment complex.
Syracuse Herald newspaper and the local headquarters of the Waldorf Commissary, which supplied a chain of restaurants established under the Waldorf name, also moved into Amos Block. Indeed, the Waldorf sign remains on the Erie Boulevard facade.
The building's namesake, Jacob Amos, whose name still appears on the building's parapets, also owned a flour mill. But, he's most known for serving as mayor of Syracuse from 1892 - 1896 (two terms). Amos' principal focus lay in a desire to improve the city's appearance. During his tenure, he oversaw the installation of sewer systems, paved streets, and completion of Syracuse City Hall.
In 1987, and more substantially in 2006,  Amos Block was remodeled and renamed "The Amos." The building now functions as an apartment complex (though some commercial units operate on the first floor.

Jacob Amos: The photo is provided by the Onondaga Historical Association to The Downtown Committee of Syracuse at http://syracusetour.herokuapp.com/stops/4