Built in 1921, this unique round structure was originally home to the flourishing Cedar Falls Ice and Fuel Company. It stored six to eight thousand tons of ice each year cut right from the frozen Cedar River. Now it is the only museum in the United States that combines an original ice house with an extensive collection of ice harvesting artifacts and archives. Smell the original wooden beams, see the tools that carved the ice, test your strength at lifting blocks of ice, and imagine the chill of working on the frozen Cedar River. 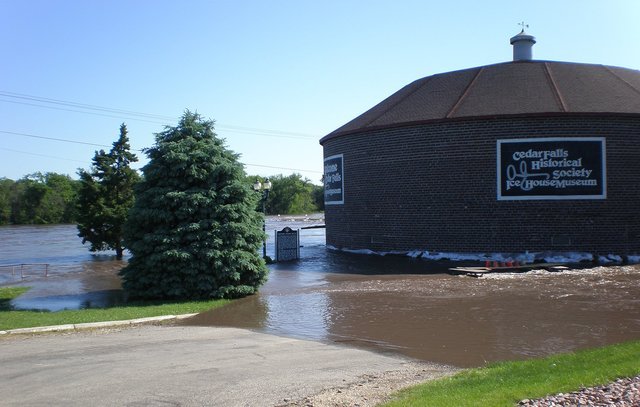 The land where the Ice House Museum sits has been the site of an ice house since as early as 1858. It was then that Black Hawk County’s first permanent settler, William Sturgis, built his cabin on the banks of the river. Several ice businesses came and went on that spot, and a large wooden ice house was in place before Hugh Smith, owner of the Cedar Falls Ice and Fuel Company, constructed the existing building in November 1921. The old wooden ice house was destroyed by fire on the night of October 22, 1921.

On that night, Smith and his wife were attending a performance at the Cotton Theatre, (now the Oster Regent Theatre). His son located Smith in an aisle seat and whispered, “Papa! The ice house is burning down!” Smith hurried to his place of business and watched the ice house go up in flames in less than an hour.

On October 24, 1921, The Cedar Falls Record reported: “An expert building engineer from Chicago is en route today on a telegraphic call from Manager Smith to assist him in drawing up plans for a reinforced structure to replace the old frame building.” The community rallied to Smith’s aid. On the Thursday following the fire, 200 volunteers cleared the rubble, and the footings for the new ice house were poured less than a week after the old house had burned down. A few days later the walls of the new building were started.

The new building was 100 feet in diameter with tile walls 30 feet high. The walls were made of hollow clay tile reinforced with steel ties between the layers of tile. The ice house had a capacity for 6,000 to 8,000 tons of ice.

Early on the morning of January 10, 1922, the first ice harvest for the new ice house on the Cedar River was begun. At the close of the 1922 harvest, carpenters assembled and raised the trussed double-pitched roof by using the top layer of blocks as a scaffold.

Open seasonally, May through mid-October CLOSED for the season Wednesdays, 1-4 Saturdays, 10-4 Sundays, 1-4