In May of 1950, Governor Allen Shivers hosted a grand opening ceremony for the new dining facility, Hubbard Hall. The Hall was name in honor of President Louis Hubbard, to symbolize everything he had done to expand and promote TWU. Being at the center of all surrounding dormitories and main buildings, Hubbard Hall was the center of the social world of TWU. This Hall is open to the students and the public, as it holds many amenities and events to bring both communities together.

Students relaxing on the steps of Hubbard Hall. This picture was taken before the hall went under renovations in January of 2018. (Picture by Texas Woman's University) 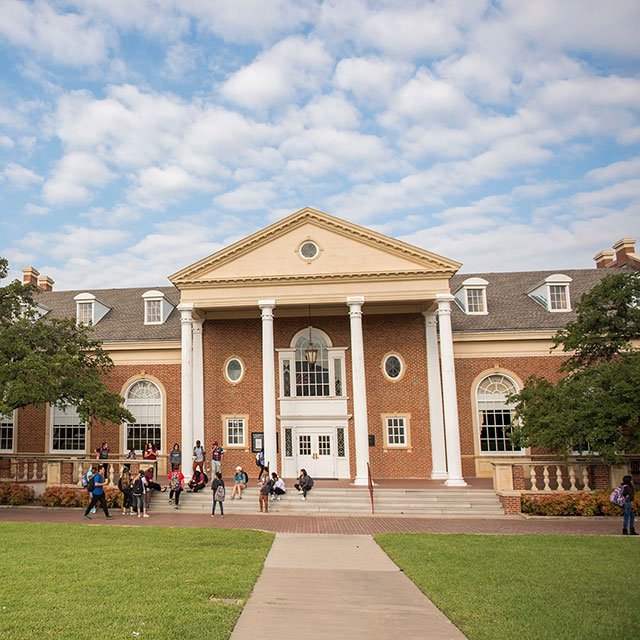 Family portrait of President Luis Hubbard and his family. President Hubbard is to the right, his wife, Bertha Hubbard is in the center and his children. (Picture by Texas Woman's University) 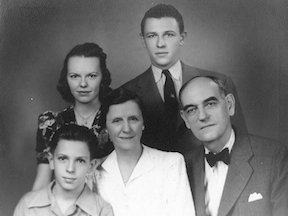 In February of 1932, Louis Herman Hubbard became president of TWU. During his presidency, there was a steady rise in academic growth and physical facilities at TWU. In 1945, President Hubbard pushed for growth across departments, supporting them with new state-of-the-art technologies, leading to an increase in students and the need for Hubbard Hall. In May 1950, the new dining hall was dedicated to President Hubbard, who after twenty-four years of presidency retired, and his wife, Bertha A. Hubbard to symbolize everything they did to expand and promote TWU.

On May 6, 1950, all students of Texas Woman’s University were dismissed from their afternoon classes to join in on the dedication ceremony at 12:05 pm, presented by Texas Governor Robert Allan Shivers.2  It was the opening day of TWU’s grand $1.5 million dining hall, Hubbard Hall. During the grand opening students, faculty, Governor Shivers and other leading members of the Denton and Dallas communities came and submitted suggestions for names for the different rooms in Hubbard Hall. A committee was established, known as the Student-Faculty Conference, due to a large number of suggestions that were sent to the school before the hall had even opened.11


Hubbard Hall's Georgian architecture features a main entrance flanked by Grecian columns that captures some of the early histories of the school while setting the tone for its future. The new dining hall was a three-story building the size of one city block.1 In the past, the dining hall could hold about 2,500 students at a time, had several tea rooms and four individual large dining halls. Each dining hall was distinctively decorated and could hold up to 450 students at a time. It also held several parlors, a laundry room, a large cafeteria, a machine shop, a bakery, several small classrooms, offices, a small banquet room and a small theatre, known as the Redbud Room. The building was designed to be used for all purposes, many of the dining halls and rooms can be sectioned off to make smaller rooms or opened up to create larger spaces. For instance, when the Redbud room was added, it was a small theatre room designed to give the students and faculty of the performance arts program more space to practice.

Hubbard dreamed of connecting the Denton community to the school and he accomplished that dream by opening up the dining hall eateries to both communities. As a result, in 1951, the school had received criticism from at least thirteen food operators in Denton that the new dining hall was threatening local businesses.10 Since its grand opening, many people had traveled from all over Texas to come to see it, for nothing was as luxurious and pervasive as Hubbard Hall.

President Hubbard wanted the hall to be the center point of all social events among the students and the Denton community. Many of these social events were organized by The Round Table, which was a group of Presidents from all the campus’s clubs and organizations, who often organized various events and social activities to bring the student body and Denton community together. President Hubbard believed that it was important for the citizens of Denton and the students to work together to help support each other. President Hubbard wanted all students from all degree backgrounds to use Hubbard Hall; he wanted it to not only symbolize the center of  TWU but also physically be the center for all students. Over the years Hubbard Hall established a bridge between the Denton community, and the school community resulting in its success.

Being the centerpiece of TWU meant that renovations were important to keep up with the growth of the school. The Hubbard Hall has undergone several small renovations since its grand opening in May of 1950, to keep up with the school's growth. Many smaller renovations began around 1959 and still continue to this day. The smaller forms of renovations included changes to color schemes and the overall design of the interior. Along with updating the facilities of the Redbud Room, an addition of automated elevators, and various equipment for the different departments like the kitchen, sciences, technology, and arts. Of the most recent renovations, the Hubbard Hall went under its grandest renovation/reinvention in January of 2018. Expected to cost about $54.5 million this renovation will have an additional 23,920 square feet to its already massive size. The renovations include structural adjustments, an additional ballroom, auditorium, large food service faculty, study lounges, an expanded art gallery, a veteran’s lounge, a meditation room and more.9