Established in 1788 and also known as the "Troop of Light Dragoons," the 1st Company Governor's Horse Guard is the longest continuously mounted cavalry unit in the United States. The Guard was formed by men from Hartford who were veterans of the Revolutionary War, and they served as an honor guard for the governor and as a ceremonial escort for prominent visitors to the Connecticut capital. The unit also filled ceremonial roles for the National Guard when those units were deployed. 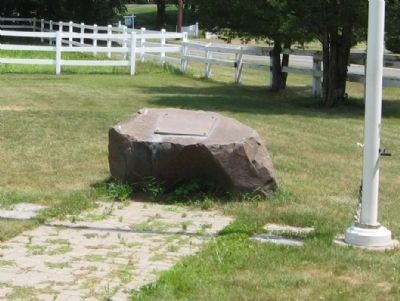 Historic Marker inscribed with the names of the Guardsmen who have honorably served. 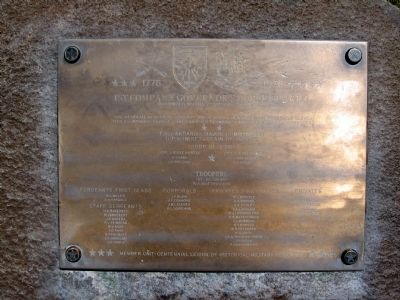 The Troop of Light Dragoons, originally named the Governor’s Independent Volunteer Troop of Horse Guards, was formed by veterans of the Revolutionary War as a mounted honor guard for the governor of Connecticut. The unit was modeled after England's Royal Regiment of Horse Guards. The General Assembly of the State of Connecticut chartered the Light Dragoons on May 29, 1788, and the first commander was Captain John Caldwell.

Their first official appearance was on October 19, 1789, when President George Washington came to Hartford. They have been in every parade, inauguration, and public event from 1789 to 1835. They escorted presidents on their trips to Connecticut, including Theodore Roosevelt. They also escorted Governor Chamberlain to the Louisiana Purchase Exposition in St. Louis in 1904. The Guard also helped the military in the War of 1812 by supplying troops.

The Troop petitioned in 1911 to be reorganized into a troop of cavalry. "Troop B", as they were then called, was attached to the Connecticut National Guard. In 1916, they served a tour of duty on the Mexican border in response to raids on American property. With U.S involvement in World War I becoming inevitable, Troop B was dismounted and reorganized as part of the 101st Machine Gun Battalion of the 26th Yankee Division. They saw combat in seven major battles in France.

Troop B regained its status as mounted cavalry after the war when they became part of the 122nd Cavalry Squadron. During the 1920s and 1930s, the unit sponsored polo matches, mounted drills, and other shows. In the late 1930s, the modernization of the military threatened the Troop, but some veterans were able to revitalize the unit. Troop B was federalized right before World War II and became 208th Coastal Artillery Anti-Aircraft, who defended America's coastlines. Shortly after the attack on Pearl Harbor in 1941, they were called to active duty and served in the South Pacific.

Aside from wartime duties, the Horse Guard has assisted state militia in a number of national disasters such as the 1936 flood, guarding federal property, and providing aid after the 1938 hurricane on the New England coast. They stepped in to serve when the National Guard was called out to Federal Service in 1940.

Today the 1st Company Governor’s Horse Guard’s duties remain mostly ceremonial and focused on community service, but they can be called to action in times of emergency. Some of the main activities of the Horse Guard include helping Boy Scouts earn their Equine Badges and working with children of National Guard members during Homecoming ceremonies. They also march in Memorial Day and Veteran’s Day parades, as well as other anniversary celebrations. The Horse Guard is always looking to recruit new members, and no experience with horses or military is required.