This historical marker commemorates Liberty, Indiana as the birthplace of Union Civil War officer Major General Ambrose E. Burnside. Burnside’s post-war career is not included in the concise marker, although he was influential as a political leader in the Republican Party and was also the president of several railroads. The Civil War forced Burnside to reconsider his political alignment as he had been a Democrat. In 1866, he was elected Republican governor of Rhode Island. He was re-elected twice more and served until 1869. In 1875, the Rhode Island Senate elected Burnside U.S. Senator. Burnside served on three different committees during his senatorial tenure: the Committee on Military Affairs, as chair of the Committee on Education and Labor, and as chair of the Committee on Foreign Relations. Continuing in this military vein, he served as the first president of the National Rifle Association when the organization was founded in 1871. He was re-elected to the Senate in 1881, again as a Republican, and served in that post until his death on September 13, 1881. 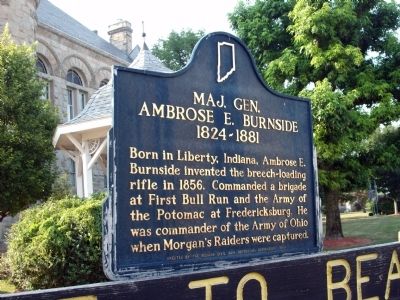 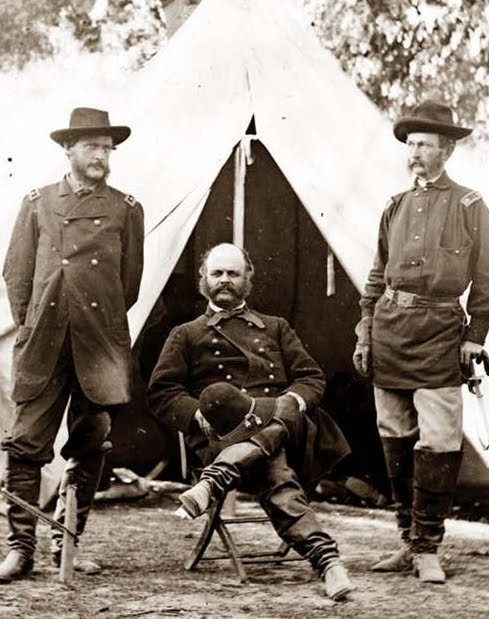 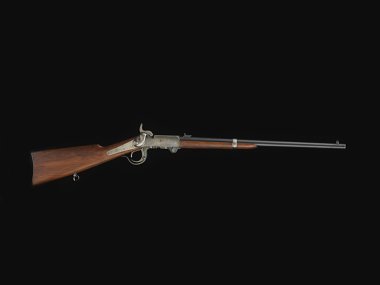 This historical marker is located in front of the courthouse in Liberty, Indiana and commemorates Union General Ambrose Burnside. The marker notes that Burnside was born in Liberty, Indiana in May 1824. Burnside is best known for his role in the battle of Bull Run and Fredericksburg, as well as his role in manufacturing of firearms used in the Civil War. Burnside was commander for a brief period of the Union Army of the Potomac.

When the Civil War broke out in 1861, Burnside raised a regiment and commanded these men, the first Rhode Island Volunteers, as colonel. President Abraham Lincoln had given Major General George B. McClellan, Burnside’s old classmate, command of the Army of the Potomac. McClellan made Burnside a brigade commander just before the First Battle of Bull Run. When Burnside’s three month enlistment expired in August 1861, McClellan oversaw his promotion to brigadier general of volunteers and placed him in command of the North Carolina Expeditionary Force and the Department of North Carolina. His efforts there closed most of the North Carolina coast to Confederate shipping for the remainder of the war. In recognition of his successes, Burnside was promoted to major general in March 1862. His forces returned to Virginia and McClellan absorbed them into the Army of the Potomac. After McClellan’s failure in the Peninsula Campaign, Lincoln offered Burnside command of the Army of the Potomac in July 1862, which he refused. Lincoln offered him command of the Army again after Major General John Pope’s defeat at the Second Battle of Bull Run. Burnside led the Ninth Corps during the Battle of Antietam in September 1862; various elements of his Corps failed to take a bridge over Antietam Creek that was guarded by about 500 Confederates. The bridge quickly earned the name ‘Burnside’s Bridge.’ After the battle, the bloodiest single day in American history, ended in stalemate, President Lincoln replaced General McClellan with Burnside as commander of the Army of the Potomac. His first engagement, the Battle of Fredericksburg, ended in disaster, and he was relieved of command in January 1863. It is worthwhile to note that Burnside’s failure was not unique in the conflict. President Lincoln appointed and subsequently removed six Army of the Potomac commanders in the course of three years until he placed Major General Ulysses S. Grant in charge in 1864.

Burnside was initially reluctant to accept the position as commander of the Potomac army but led the Union army only to endure a a crushing defeat at the Battle of Fredericksburg. Ambrose Burnside found success after the war as he was part of a firm that developed firearms - most notably, a breach loading rifle known as the “Burnside Carbine.” Burnside also is credited with being the inspiration for the nickname for the facial hair style “side burns”, due to his unique facial hair that connected from his hair line to his mustache.

During the Civil War, Burnside was one of four men to command the Army of the Potomac in Virginia. Offered the job twice previously—following George B. McClellan's failed Peninsula Campaign in 1862 and following the Second Battle of Manassas later that summer—he turned it down, citing his own lack of experience and encouraging his peers and, subsequently, historians to question his self-confidence. When he did take command of the army, he led it into disaster at the Battle of Fredericksburg (1862), perhaps the Union's most lopsided defeat of the war. After his corps was badly defeated at the Battle of the Crater (1864) he went home on a leave of absence from which he was never called back to duty. Burnside's dismal reputation is probably unfair, however. He was an innovative engineer but an unlucky general who was often made a scapegoat for larger failures.

In early 1864, Burnside was ordered east to Annapolis, Maryland, where he built his corps up to 21,000 men. Burnside and his newly reinforced Ninth Corps participated in the Overland Campaign in May 1864. He also led troops in the Siege of Petersburg in June 1864. On July 30, a regiment of former miners in Burnside’s corps successfully dug a mine under Eliot’s Salient, one of the forts in the Confederate entrenchments. The explosion under the Confederate lines marked the start of the Battle of the Crater. The battle ended in a Union slaughter with Burnside’s men taking serious casualties. On August 14, Lieutenant General Ulysses S. Grant relieved Ambrose E. Burnside of command. He remained on leave until the end of the war and resigned his commission on April 15, 1865. A court of inquiry originally blamed Burnside and his subordinates for the carnage at the Battle of the Crater, but the United States Congress Joint Committee on the Conduct of the War later blamed Major General Meade.